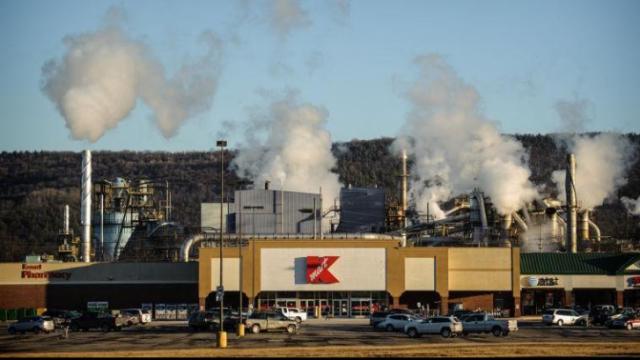 Towanda, Pa. — Doug McLinko steers his black Ford pickup past pockets of thawing snow and stunted stalks of last year's corn. He stops at a dirt clearing surrounded by a fence and razor wire.

In the center, a drab wellhead with pipes, gauges and valves pokes about 6 feet out of the ground. The well quietly passes natural gas through an unseen gathering line.

In 2008, the first drilling rig went up in Bradford County, a rural river valley of about 62,000 residents in northeastern Pennsylvania. Today, more than 800 wells, like this one owned by Southwestern Energy of Houston, are extracting gas from the undulating hills with views of barns and grain silos.

McLinko, who is chairman of the county Board of Commissioners, said the gas industry has created jobs, helped save the family farm and spawned businesses to serve the gas field workers. Since 2008, companies have paid about $400 million in gas royalties to county landowners, local officials estimate.

This is part of the fourth day in a six-day series on gas drilling and hydraulic fracturing, which could begin in North Carolina next summer. Follow the complete series at fayobserver.com/fracking, and tell us what you think by email to news@fayobserver.com or by calling 910-486-3565.

"Everybody who wants to go to work in Bradford County is working right now," he said.

The Fayetteville Observer traveled to this community in March to see what could be in store for the Cape Fear region when North Carolina begins to allow drilling and hydraulic fracturing as early as next year. Pennsylvania is more than six years ahead of North Carolina in drilling, and its gas reserves are vastly larger than what is believed to be in the Tar Heel State's Deep River shale basin.

But Lee County, where the potential is highest for lucrative wells, can look to Bradford County for a sense of what happens when a rural farming community suddenly becomes the epicenter of gas drilling.

Pennsylvania officials say the oil and gas industry directly employs almost 30,000 people today. Since 2008, more than 6,700 wells have been horizontally drilled and fracked, including 2,000 in Bradford County.

But all that drilling has not been without controversy, lawsuits, growing pains and a few accidents, including a gas well explosion in February south of Pittsburgh that killed one worker and injured another.

"Baloney," he said. "You know what? It's a blessing from God himself, and I mean that sincerely."
Drilling becomes a way of life

As county board chairman, McLinko is the full-time administrator for Bradford County. His corner office at the courthouse has pictures of Abraham Lincoln, Ronald Reagan and Oliver North hanging on a wall.

In Bradford County, the tax base has soared by $100 million over the past four years, and the county has received $15.7 million since 2012 from impact fees the state levies on the gas industry. Revenue from those fees - equal to almost a third of the annual budget to operate the local government - has helped Bradford County eliminate its debt and reduce property taxes.

And unemployment in March was 5.8 percent, below the state and national averages.

When the gas industry came, an economic boom followed - along with some headaches for Towanda, the Bradford County seat of about 3,000 residents along the banks of the Susquehanna River. During the peak of well construction in 2009 and 2010, slow-moving tractor-trailers and large pickups clogged this borough's single main street. At times, traffic backed up for two miles, residents say.

Out-of-town workers crowded restaurants and sent housing rents soaring. Police calls for vehicle accidents and assaults climbed. In the countryside, residents accustomed to seeing little traffic on narrow roads had to slow down for tanker trucks.

To ease the housing crunch, at least half a dozen hotels have sprung up over the past five years. In 2010, Chesapeake Energy opened a "man camp" for about 280 workers in northern Bradford County. The housing complex has since emptied, as Chesapeake has coped with downsizing and restructuring.

Some of the gas companies began donating firetrucks to small stations, sponsoring Little League teams and hiring local business people to sit on their executive boards.

"It's tactics of a friendly invading army," said Paul Fairchild, 49. He runs a hardware store named after his family on Main Street, where the streetlights in March had memorial flags sponsored by Chesapeake Energy.

Seeing economic promise, Cory Bride, 27, returned home from college in 2010 and opened a high-end vehicle accessories shop on the Golden Mile, a commercial strip outside Towanda. He was the only employee at first, and 90 percent of his customers were gas workers wanting big tires, flashy rims and macho grilles for their pickups.

Today, Bride employs 11 people and has diversified by accessorizing pickups at dealerships before the vehicles are sold.

"The oil fields really jump-started the business," Bride said. "We didn't have to get the customers. We just had to service them."

Gas workers are not the only ones with extra income. In 2003, Joy Swebilius and her husband, David, bought 100 acres in Bradford County to build their home. They didn't know their land was over the Marcellus shale, but they later signed a gas lease with Southwestern Energy.

In June 2011, about three months after a gas well was constructed, the couple began getting monthly royalty payments of 12.5 percent. The payments have ranged from $5,000 to $130,000 in a single month, thrusting the family into a higher tax bracket, she said.

"Make sure you get a good accountant that understands this," she advised North Carolina landowners.

With their newfound wealth, they bought cars for several family members and helped their youngest son, Austin, and his friend sign a lease and open Cafe 316 on Main Street last year.

"The money has been such a blessing," Joy Swebilius said.
Bradford County's gas boom

McLinko, the county commissioner, has a lease with Chesapeake for some of his properties but won't discuss his royalties.

In December, McLinko bought a stone and blue-paneled home on a hill outside town. He can see a well pad on his neighbor's land about 500 yards away. In front of McLinko's house is an impoundment pond from which companies draw water for fracking.

"You live in Bradford County, you're in the midst of it," McLinko said.

He does not own the mineral rights for the 35 acres where he lives. When he bought his home, the seller severed the rights to keep for drilling income.

"I'm OK with it," McLinko said. "It's a mile underground. I practice what I preach."

Despite the good fortunes the industry has brought, there have been problems.
Aerial view of a drilling site

In 2011, a wellhead operated by Chesapeake Energy of Oklahoma City suffered a blowout, causing thousands of gallons of fracking wastewater laced with chemicals to spill into a creek outside Towanda. The wastewater is what returns to the well surface after fracking to be hauled away.

After the blowout, the former chairman of the Bradford County Board of Commissioners wrote an open letter to Gov. Tom Corbett complaining of several issues "in relation to the development of natural gas in Bradford County."

"Well-water contamination in Bradford County is a real and serious issue that is affecting residents' quality of life, livelihoods, families, and property values," wrote Mark W. Smith, who is still a county commissioner, according to The Daily Review of Towanda.

In 2012, Chesapeake Energy agreed to pay a $1.6 million settlement to three families in the county after investigators said poorly built wells allowed methane to contaminate groundwater, turning their well water muddy, according to a National Public Radio report examining fracking in Pennsylvania.

An investigation by The Associated Press found that Pennsylvania's Department of Environmental Protection had logged 398 complaints statewide in 2013 alleging oil or gas drilling had polluted or affected private water wells. That number was down from 499 in 2012.
Aerial view of drilling site

Since 2005, the state department has confirmed 106 cases of well-water contamination from drilling activities out of more than 5,000 new wells, the AP reported.

According to the Pennsylvania Department of Environmental Protection, regulators found 70 violations at 37 wells in Bradford County last year. Many were administrative infractions, but 18 were for companies not properly storing, transporting, processing or disposing fracking wastewater.

According to state records, Chesapeake was fined $35,862 for having a "pollution incident," which was fluid on the well pad. Another company was cited for spilling a gallon of production oil on the ground.

Of the 11 drilling companies that operate in Bradford County, Chesapeake has the largest presence.

McLinko said he is careful to say he supports gas development, not the gas industry.

"We take every complaint seriously," he said.

About 18 months ago, construction of new wells began to drop off in northeastern Pennsylvania.

The price of natural gas plummeted to below $3 per 1,000 cubic feet last year, which was half the 2010 price, and operators began flocking to western Pennsylvania and eastern Ohio to drill for "wet" gas.

Liquid natural gas, which North Carolina geologists believe lies below Lee County, is more valuable than "dry" gas. Liquid gas fetches about $40 a barrel. Oil sells for about $100 a barrel.

At the peak three years ago, about 30 drilling rigs were under construction at one time in Bradford County. Today, that number is about six.

Tim Bartholomew, a Bradford County logger, said he spent his life savings on equipment to become a contractor for the gas industry.

Then the bottom fell out.

"And when it all slowed down, they, of course, cut the little guys first," he said.

Bartholomew went back to work as a logger.

Others wonder what will happen after the natural gas is extracted and drilling operators move into other states.

Sarah Lynch, a part-time student living east of Scranton, grew up here and has family in Bradford County. She said the industry's phenomenal growth has been good for businesses.

"But the long term makes me nervous for the area," said Lynch, eating lunch on the outskirts of Towanda. "Just because once everyone leaves, I think it's going to be just a drastic decline in business. I think it stands a good chance to do a lot of damage."

McLinko said talk of a gas industry bust is wrong.

"They leave behind a ton of full-time workers - well-tenders, pipe-layers, truck haulers," he said.

"It's a nomadic business," said Ventello, executive director of Progress Authority, an economic development organization in Towanda. "They come, they go."

Ventello said the industry's boom flattened two years ago. Activity is beginning to pick up again.

And the gas fields are spurring a spinoff industry. A $750 million electricity-generating plant, which will use locally extracted natural gas, is set to come online in 2016 with about 30 full-time employees.

Ventello said Dresser-Rand, a supplier of equipment used by the oil and gas industry, is considering Bradford County for an $80 million plant that would employ 100 people.

"The long-term solution to all of this is we have to have value-added, sustainable activity from this industry," Ventello said.

Staff writer Andrew Barksdale can be reached at barksdalea@fayobserver.com or 486-3565.