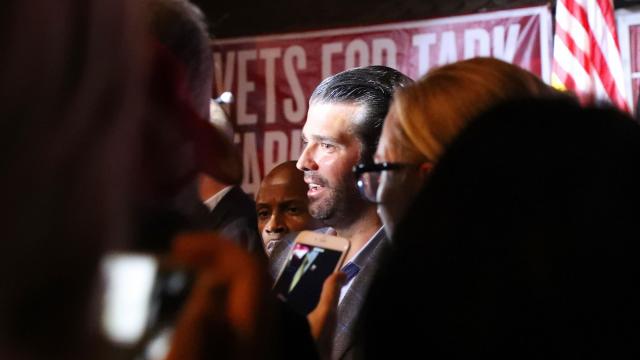 CAPE GIRARDEAU, Mo. — The show onstage might well have been called Fox & Friend. As President Donald Trump wrapped up the midterm election cycle with a late-night rally in southwest Missouri on Monday, he was joined by a trio of conservative media rock stars.

Introducing the president as he stumped for Republican candidates was Rush Limbaugh, the radio host who was born and raised in Cape Girardeau. Then after Trump took the microphone, he invited two Fox News personalities, Sean Hannity and Jeanine Pirro, to join him on stage, where each also delivered a short speech backing the president.

The line between the Trump White House and Fox has always been a little blurry, but in that moment at least, the fusion of president and network seemed complete.

Trump has long relied on his favorite network as his outlet of choice for interviews and messages. His vice president, Cabinet secretaries and staff members appear with great regularity.

The pipeline also works the other way. The president recruited his current national security adviser, John Bolton, from Fox and he is considering naming another former Fox personality, Heather Nauert, as his new ambassador to the United Nations as early as this week. His son Donald Trump Jr. is dating Kimberly Guilfoyle, who left her position as a Fox host last summer to “dedicate myself full time” to supporting the president’s political activities.

Hanging around backstage Monday night was Bill Shine, a former Fox co-president now serving as deputy White House chief of staff in charge of communications. As the rally began, Shine and Hannity were spotted giving each other a high five not long after Hannity interviewed Trump.

“I never miss your opening monologue,” the president told Hannity during the interview. “I would never do that.”

A few minutes later on stage, Trump cited Hannity to the crowd.

“I was speaking to Sean Hannity backstage,” he said. “Do we love Sean?”

The audience cheered. They loved Sean.

Hannity’s role here was a surprise and yet not. On Sunday, the Trump campaign organization announced that Hannity and Limbaugh would join the president at the Cape Girardeau rally as “special guests.”

By Monday afternoon, Hannity was disputing that.

“In spite of reports, I will be doing a live show from Cape Girardeau and interviewing President Trump before the rally,” he wrote on Twitter. “To be clear, I will not be on stage campaigning with the President. I am covering final rally for my show. Something I have done in every election in the past.” The Trump campaign news release was deleted from the web.

Except then he was on stage campaigning with the president.

Hannity climbed onto the stage and took the microphone. Referring to the news media pen in the back of the arena, Hannity echoed one of the president’s favorite lines.

“By the way,” he said, “all those people in the back are fake news.” The crowd booed.

Presumably, he did not mean all those people since they included a crew from none other than Fox News with correspondent Kristin Fisher.

Hannity expressed surprise at being asked to speak but then launched into a few lines supporting Trump.

“I had no idea you were going to invite me up here,” he told the president. “And the one thing that has defined your presidency more than anything else — promises made, promises kept.”

Trump then introduced Pirro, who he said “treats us very, very well” and “has got viewership like you wouldn’t believe.”

Pirro offered her own endorsement of the president from the stage.

“Do you like the fact that this man is the tip of the spear who goes out there every day and fights for us?” she asked the enthusiastic crowd. “If you like the America that he is making now, you’ve got to make sure you get out there tomorrow.”

“Jeanine has been a great, great friend to all of us,” he said.

In addition to the two Fox stars, Limbaugh got top billing. A Cape Girardeau native, he remains an important figure in this town on the Mississippi River. A road near the airport is named after him and the federal courthouse in town is named after his grandfather. Tourists are offered a self-guided tour of the landmarks of Limbaugh’s life, from the house where he grew up to the schools that he attended to the barber shop where he shined shoes to the local radio station where he got his start.

The conservative media figures were featured prominently at the start of the rally. By contrast, Josh Hawley, the Republican candidate for Senate whose campaign was the ostensible purpose of the rally, was not called to the stage until an hour and six minutes after Limbaugh first got up to get the show started. Hawley was given five minutes to speak; Limbaugh got 10.

While news reporters are generally barred from participating in partisan events, the cross-pollination between the political and the opinion media worlds has only grown in recent years. Partisan figures are hired as network commentators even as they continue to interact with their side of the aisle.

When Glenn Beck was still at Fox during Barack Obama’s presidency, he helped sponsor a Tea Party rally in Washington to protest White House policies. During the 2016 campaign, CNN severed ties with Donna Brazile, a Democratic strategist, after it was revealed that she shared questions for CNN-sponsored candidate events in advance with friends on Hillary Clinton’s campaign.

Even so, it is unusual for full-time media commentators to cross the line to directly participate in political rallies. Indeed, when Hannity planned to attend a Tea Party rally in 2010, Fox pulled the plug.

“I don’t think we should be supporting the Tea Party or any other party,” Rupert Murdoch, the founder of Fox News, said at the time.

But as Trump emerged on the presidential scene before the 2016 election, Hannity, for one, has made no secret of their friendship.

“I’m not hiding the fact that I want Donald Trump to be the next president of the United States,” Hannity told The New York Times in 2016. “I never claimed to be a journalist.”

By last year, he amended that.

“I’m a journalist,” he told The New York Times Magazine. “But I’m an advocacy journalist, or an opinion journalist.” Trump is happy to embrace Hannity and Fox. At other campaign rallies this fall, he gave shout-outs to Fox News personalities by name, finding that to be a reliable applause line with his supporters.

In Council Bluffs, Iowa, as he called Democrats “the Dims,” he attributed the word to Fox. “Who says that? Lou Dobbs, the great Lou Dobbs,” Trump said. “He says that, right? Sean Hannity says that. The Dims. Sean Hannity.”

“Judge Jeanine says that, doesn’t she?” he added.

“Laura — how good has Laura been, right?” he went on, referring to Laura Ingraham.

The crowd cheered some more.

“We got a lot of good people,” he said. “Do we like Tucker?” he asked, meaning Tucker Carlson. “I like Tucker.”

The crowd applauded its agreement.

He was not finished yet. “How about Steve Doocy?” he asked. “How about Ainsley, Brian?” That would be Ainsley Earhardt and Brian Kilmeade, hosts along with Doocy of “Fox & Friends,” which the president watches regularly in the morning.

As Trump concluded at the Iowa event, “We got a lot of great friends.”