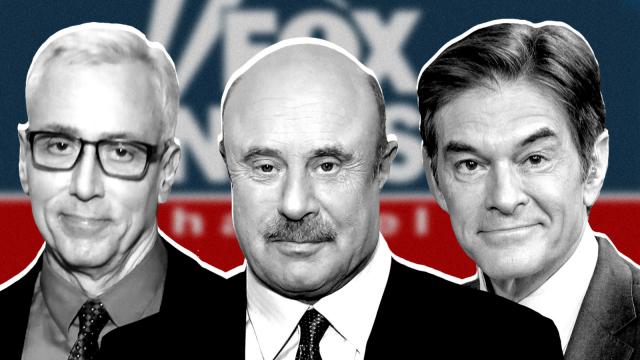 CNN — Fox News has displayed a knack in recent weeks for inviting prominent television doctors on its air who make absurd comments that ignite controversy.

Since the arrival of the coronavirus pandemic, the conservative network has hosted Dr. Mehmet Oz, Dr. Drew Pinsky, and Dr. Phil McGraw on its programs.

While the three household names have all had success in daytime television, each of them has previously faced serious criticism from medical professionals. Moreover, none of them are infectious disease experts.

And yet Oz, McGraw, and Pinsky have all appeared on Fox News, making comments that support the network's editorial viewpoint, but which fly in the face of what health officials have said about the coronavirus.

In the weeks before President Donald Trump declared a national emergency over the pandemic on March 13, Fox News hosts and personalities spent continually downplayed the seriousness of the coronavirus.

After Trump's declaration, their tone became more serious. But it has again shifted of late, with high-profile hosts and personalities now pushing to end the shutdown and questioning whether it was even prudent in the first place.

Neither Oz, nor McGraw, nor Pinsky are on the payroll of Fox News. The network does have a pool of paid medical contributors, which includes Dr. Marc Siegel, Dr. Martin Makary, and Dr. Janette Nesheiwat, that it regularly uses to discuss the virus.

But Oz, McGraw and Pinsky are household names, giving what they say and the advice they dispense significantly more weight. And the comments each of them have made while on Fox News have supported the message the network was promoting at one point or another.

A spokesperson for Fox News declined to comment for this story. But all three doctors have walked back the controversial comments they've made during their appearances on the network.

Oz, the celebrity cardiac surgeon, has become a fixture on Fox News in recent weeks, although he is not formally employed by the network.

During his appearances, he has made comments that have drawn significant scrutiny. This week, he faced backlash for comments he made Tuesday on Sean Hannity's Fox News show.

As Hannity, arguably Trump's top supporter on cable television, discussed how to end the shutdown and get Americans back to work, Oz offered up an idea.

Reopening schools across the country might be "an appetizing opportunity." He cited an article in a medical journal which said it "may only cost us two to three percent in terms of total mortality."

"We need our mojo back," Oz told Hannity, contending that reopening schools "with the theoretical risk on the backside" might "be a trade-off some folks would consider."

Oz did not respond to requests for comment from CNN. But on Thursday, facing significant criticism, he released a video on Twitter in which he said he "misspoke."

"I've realized my comments on risks around schools have confused and upset people, which was never my intention," Oz said.

Oz said he has been "asked constantly" how to "get people back to their normal lives." He said he would continue to examine different approaches to "beat this virus."

But those aren't the only comments Oz has made on Fox's airwaves that have drawn criticism.

He has caught Trump's attention for talking up the potential effectiveness of the antimalarial drug hydroxychloroquine as a way to treat the novel coronavirus — despite the lack of firm scientific evidence that it is an effective treatment.

Oz himself has even acknowledged the lack of evidence from clinical trials that proves whether or not hydroxychloroquine is effective against the coronavirus.

"There's no question it's not proven to be beneficial in large clinical trials we expect in America, certainly that the FDA and medical societies would desire," Oz acknowledged earlier this month on Fox News. "But these have been supported with case studies."

In fact, at the time of his comments, studies in humans had presented conflicting conclusions. This week, however, a French study found that hydroxychloroquine does not help patients with the virus.

Oz, who is an advocate of alternative medicines and treatments, has been skewered by the medical community for years. In 2015, a group of physicians wrote Columbia University, saying they were "dismayed" Oz was a member of the school's faculty. And in 2014, Oz was scolded by senators during a congressional hearing over his promotion of weight-loss products on his television show.

Each time, he has defended himself. In 2015, Oz said he provides the public "information that will help them on their path to be their best selves," provides "multiple points of view," and contended that "doesn't sit well" sometimes "with certain agendas which distorts the facts."

McGraw is not a medical doctor; he holds a doctorate in clinical psychology, but is not licensed to practice.

On Thursday night he appeared on Laura Ingraham's Fox News show where he appeared to criticize the shutdown.

"The economy is crashing around us and they're doing that because people are dying because of coronavirus," McGraw said. "I get that, but look, the fact of the matter is we have people dying -- 45,000 people a year die from automobile accidents, 480,000 from cigarettes, 360,000 from swimming pools -- but we don't shut the country for that."

"But yet," he added, "We're doing it for this and the fallout is going to last for years because people's lives are being destroyed."

McGraw faced a brutal round of criticism for his comments, with his name trending on Twitter Friday morning.

Critics pointed out that automobile and swimming pool accidents are not contagious causes of death.

Moreover, his comments about swimming pools were grossly inaccurate. According to the Centers for Disease Control and Prevention, there were 3,536 unintentional drownings in the United States form 2005 to 2014 — not the 360,000 annually as McGraw said.

In a video posted online Friday afternoon, McGraw apologized and acknowledged his errors.

"Last night I said we as a society have chosen to live with certain controllable deadly risks every day: smoking, auto crashes, swimming. And yes, I know that those are not contagious," McGraw said. "So probably bad examples. Probably bad examples."

"And by the way, I misspoke about drowning deaths," McGraw added. "I quoted a worldwide number, not a US number."

McGraw said he wants people to follow recommendations issued by public health experts and government leaders, and said he believed the country was right to shut down if that is what it takes to protect people.

But McGraw said that he worries about people's mental well-being while stuck in quarantine. He said he is "concerned the deterioration of the mental and physical health can be substantial" while inside for prolonged periods of time.

Pinsky is one of America's most famous physicians. He's widely known for his syndicated radio show "Loveline" and the reality television show "Celebrity Rehab." He also previously hosted a show on CNN's sister channel, HLN.

In early March when called upon to offer his professional opinion on the coronavirus, he significantly downplayed the threat and instead attacked news organizations that were taking it seriously.

In appearances on Fox News in early March, Pinsky claimed the real problem was "due to panic, not the virus." And, despite data pointing to a much higher mortality rate for the coronavirus, Pinsky argued the flu was "vastly more consequential."

"It is a press-induced panic that will have real consequences," Pinsky said in a March 2 appearance on Ingraham's show.

Pinsky shared a similar message in other television appearances, including channels outside of Fox News. He argued that panic inspired by the press was "far worse than the virus."

At the time, his comments were criticized, but Pinsky stood by them. But earlier this month, in the face of incontrovertible evidence, Pinsky apologized.

"My early comments equating coronavirus with influenza were wrong," Pinsky said in an April 5 video posted to Twitter. "They were incorrect...and I want to apologize for that. I wish I had gotten it right, but I got it wrong."