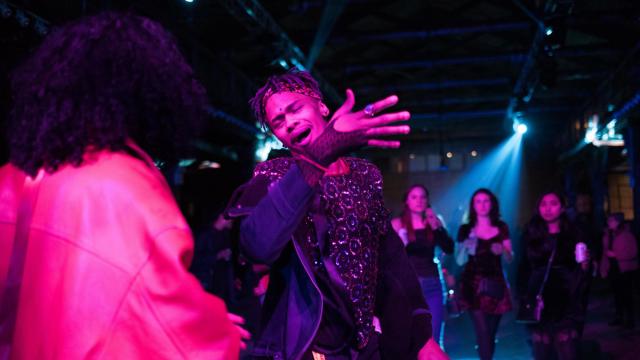 NEW YORK — It was a tough year, but at least we got “Big Little Lies” and Tiffany Haddish. Politics appalled a lot of us, men did, too, and the Scotch tape holding the New York City subway together popped off. Not to mention, New Yorkers were handed the coldest New Year’s Eve since 1962. “I dare you,” 2017 seemed to be taunting. “Ring me out.”

Part of me wanted to ignore the dare. New Year’s, always hard for me, felt increasingly lonely. Most of my friends are married, affianced, or gobbled up by Los Angeles, or veganism. I’m 34. I’m single, and always have been. I’m a terrible dancer. And yet: there’s virtue in stepping into the bracing cold, in shocking the blood awake and feeding the brain something new.

After spending last New Year’s crawling across Manhattan, I wanted to set foot in other boroughs — all four of them, in fact. My friend Colin agreed to join. I chose wildly disparate experiences — Cardi B, contra dancing, Vivaldi, an all-night gender-fluid party — to see if 14 hours outside of my comfort zone, in the company of strangers, might crack me open a bit for the year to come.

I’m firmly an indoor person, but I thought I’d start off with a little natural splendor. We arrive for one of the Sunday afternoon guided walks of Wave Hill, with its striking views of the New Jersey Palisades.

Turns out we are the only people on the tour. It’s 16 degrees. Even Jon Snow would head inside.

Our guide Tony takes us by the Wave Hill House. Theodore Roosevelt lived there for a while, as did Mark Twain. Blindingly cold, I see the house as shelter, and whatever cave man DNA my iPhone and homosexuality haven’t overridden now compels me toward it.

Later, I consider the European hornbeam tree before me, whose bare branches jut out conically, and an Asian dogwood tree, whose bark reddens in the winter. I’m heartened, seeing things thrive in misery. Trees exfoliate in the winter, Tony tells us, shedding their bark in radical self-care. I imagine them opening a nice shiraz after we’ve left.

I’m partial to the opening credits of “Working Girl,” so I figured a ride on the Staten Island Ferry, bound for Manhattan on the eve of a new year, would be particularly stirring. I stare ahead at the financial district skyline, pretending the Carly Simon song is playing and I’ve got Melanie Griffith’s hair. The air feels like daggers, but I manage.

My fellow passengers feel differently. Everyone’s bundled and exhausted, dressed for a Sunday commute, not New Year’s revelry. As we pass the Statue of Liberty, foreign tourists pop onto the outer decks for quick photos, their fur-trimmed hoods flapping in the lacerating wind. In the bathroom, a man rests clanking bags of wine on either side of the sink before stepping to the urinals.

Jill Montesano, 20, and her boyfriend, Brenden Kranich, 20, are heading to Times Square. “The people, that’s what’s going to get to me,” Kranich said. “Sometimes it wigs me out not being able to move. It’ll be fun, though, to get to spend it with her.”

“He said no more kisses until midnight,” Montesano said.

Billed as “New York’s floating concert hall,” Bargemusic is presenting Vivaldi’s “Four Seasons” and Bach’s “Violin Concerto in A Minor” at its home, a converted coffee barge moored by the Brooklyn Bridge.

In the cozy hull, the seven-member ensemble, led by violinist Mark Peskanov, tuned onstage in front of windows looking onto the Manhattan skyline. The audience — mostly older, white and NPR tote bag-owning — filed in happily.

Two couples laughing it up behind me — Lisa Love and Charlie Mendosa, and Lauren Glant and Michael Gillespie — became friends when their children dated and remained so after they split up. “Our kids used to be involved, and now we are,” Gillespie said.

The ensemble makes a crisp and emotive meal out of the Vivaldi, as the boat rocks in the wake of all the East River booze cruises. Peskanov plays so hard he breaks a bow string during “Autumn.”

I catch the cute bassist glancing at me, and I imagine a Zankel Hall wedding, but he’s probably just wondering why someone’s in a “Little Mermaid” sweatshirt in the front row. “It’s for a ‘90s party later,” I want to mouth. “And it’s my roommate’s.”

The “Winter” concerto’s my favorite, and I glance at Vivaldi’s sonnets, translated in the program. “Shivering, frozen mid the frosty snow in biting, stinging winds,” he wrote. “This is winter, which nonetheless brings its own delights.”

Colin and I hold hands with the people next to us and form a circle of four.

“Circle to the left,” she says.

We circle to the left.

“And stop,” she says. “Get your partner across from you, and you’ll be home.”

We’re in the lofty gymnasium at Camp Friendship where Brooklyn Contra, a volunteer-run club, is hosting a New Year’s Eve contra dance. Contra is a social dance, with traces of square, swing and folk, where you’re in weaving, twirling lines and constantly being flung into a new person’s arms.

Eye contact is key. I’m terrified, but I’m here to push myself.

“Find someone experienced to dance with,” the instructor says.

A local band called Grand Picnic plays, and Colin is whisked away. “Will you teach me?” I ask a woman in a scarf.

“Someone will,” she says, already saddled with a beginner and clearly not wanting to double her burden.

I do-si-do with a man named Chris, who, as he spins me, says, “I need more resistance from you.”

There’s not really time to think; you just have to take people in your arms and hold their hands and look in their eyes and twirl. “Hello! Hi! I’m sorry!” I shout to every new partner, and most can’t wait to fling me to the next.

“Release hands and turn alone,” the instructor calls out. “But don’t turn your back on your neighbor.”

“I turned my back on you,” the older woman next to me says, taking my hand again. “I’m so sorry.”

Benevolence! I nearly cry. Colin, still wobbly from the barge and now the twirling, gets sick.

Rapper Cardi B, one of two female artists to hit the Billboard No. 1 spot in 2017, is set to perform at the Knockdown Center, an old glass factory converted into a performance and art venue. The coat check line is like Ikea on a Saturday, so we wear ours. The vaulted, concrete-floored space fills up. Women’s necklines plunge in sequined and knit dresses and backless jumpsuits; men wear red tuxedo jackets, ski lodge sweaters and turtlenecks with billowing bell bottoms. A girl in a beret kneels to lick and seal a newly rolled joint, which she then holds high in triumph.

The young crowd is a healthy mix of colors and persuasions, all smoking weed — Jeff Sessions’ nightmare, I reckon.

“If you’ve got somebody who’s locked away, put your cellphone lights up,” the DJ says, and a sea of cellphones are thrust into the air. “If somebody’s passed on, put ‘em up.” More go up. “Keep ‘em up, New Year’s Eve,” he says, playing Meek Mill.

Plastic flutes of free Champagne line the back bars like terra cotta warriors. The crowd is lively and hands are in the air, pounding to a mashup of Soul II Soul, Snap!, and Rob Base and DJ E-Z Rock. A group of girls form a hand-held chain and first-grade-field-trip their way through the crowd.

People make out: scruffy boys, a man holding his girlfriend and a bottle of Patrón, and two glam girls against the column I’d found to lean on but quickly ceded, eminent domain and all. Clumps of VIPs on elevated platforms swell like sea anemone. Colin texts a guy he’s flirting with. I watch Ben Platt’s Instagram story.

When the clock strikes midnight, the air fills with smoke. Cardi B, now onstage, takes the mic.

“I want to thank everybody for supporting my music,” she says, then takes a selfie video and leaves the stage. There’s confusion. “Cardi’s gonna have a few drinks, give her 30 minutes,” the DJ says, and puts on more music.

People hit the bars, Edward Scissorhanding multiple glasses of Champagne. In the gender-neutral bathrooms, there’s vomit in two out of nine sinks. By coat check, people sit on the floor checking their phones, heads drooping like week-old flowers.

So far it’s been a lot of "& Friends,” but finally Cardi B emerges, in a sparkly blazer and bra.

I’ve got a contact high and I’m about to swim to a man on a barge, that’s what’s poppin’.

“It’s a new year, bitch,” she says. “There was another state that offered me more money, but I wanted to spend it in my home. So let’s get it poppin’.” She throws off her blazer and launches into her hit, “Bodak Yellow.”

“We waited all that time for two or three songs?” a woman shouts at her friend. “We could’ve gone to a dive bar.”

“Would you like a free hug?” a twentysomething in nothing but gold underwear asks me in the entrance to the House of Yes.

“Aren’t you freezing?” I say. “I hope you’re getting hazard pay.”

Inside, a remix of Donna Summer’s “I Feel Love” blasts while silver-leotarded dancers writhe in hanging, spinning cages. Two female go-go dancers, one in silver antlers, the other in a silver dolphin head, dance on the bar.

It’s a ‘90s-themed party, and I’d hoped for the “Friends” theme, or maybe an episode of “Dr. Quinn, Medicine Woman.” People dance in painted suits, blazers with crew neck shirts, Nickelodeon T-shirts and half-undone overalls. Flannels hang from more than a few waists. In the side room, a circle of guys, shirtless under their unzipped Adidas tracksuits, hold hands and take turns staring into one another’s eyes — future contra dancers, all.

It’s quiet like a waiting room on the subway, heading farther into Brooklyn.

“Where are we going now?” a girl asks her friend.

The line for the Spectrum Party at the Dreamhouse, a parquet-floored DIY queer venue, is so long there’d better be a cronut or Bette Midler in “Hello, Dolly!” at the end of it.

“Line bumps,” the woman next to me says to herself, tapping a half-teaspoon or so (I’m hoping to cook more in 2018) of cocaine onto her knuckle, then snorting it.

The entryway is littered with tinsel, ATM receipts, and half-full Poland Spring bottles. Inside, it’s like a David Lynch rumspringa, but with no choice at the end, just more of what you’re doing. People stumble around like zombies, kissing and shoving — that 4 a.m. mix of inspired and incapable.

I did it — I left the house and heard music and saw nature and the whites of strangers’ eyes. But, frankly, after 3 a.m., New Year’s takes on a homogeneous blur. People stumble on, blowing at the occasion’s embers long after they’ve gone out. There comes a time when you have to let a night, as you do a year, go.

“Bodak Yellow” plays softly on the radio on the ride, and I, sort of, softly, sing along.