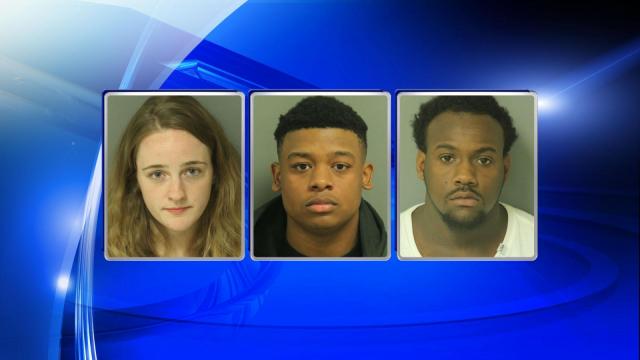 Wendell, N.C. — Four people, including a 15-year-old girl, were arrested last week and charged in connection with a February robbery at Wendell's K&S Bank, at 2850 Wendell Blvd.

According to Wendell police, Donovan Kearney, 19, of 5328 Seaspray Lane in Raleigh, entered the bank on the afternoon of Feb. 25 with a handgun and demanded money from employees. No customers were in the bank and no one was injured. Kearney faces charges of robbery with a dangerous weapon, conspiracy to commit robbery with a dangerous weapon and three counts of second-degree kidnapping.

Police also seized a 1994 Lexus LS 400 belonging to Wiggins, which they said was used as the getaway car.

Wiggins and Beaver surrendered to authorities last week. Both were being held at the Wake County Detention Center. Her bond was set at $150,000; his was $100,000.

Kearney was arrested on Friday and had yet to learn Monday what his bond would be.

Bill Carter, Wendell's chief of police, noted that the Feb. 25 robbery was the first on a Wendell bank in 50 years.

"Given the nature of the crime, the origin of the offenders and other factors, the ability to bring this case to a successful conclusion is a testament to not only the well-established working relationships within the law enforcement community but to the commitment of the trained professionals involved,” he said.