Foster care workers share what motivates and moves them 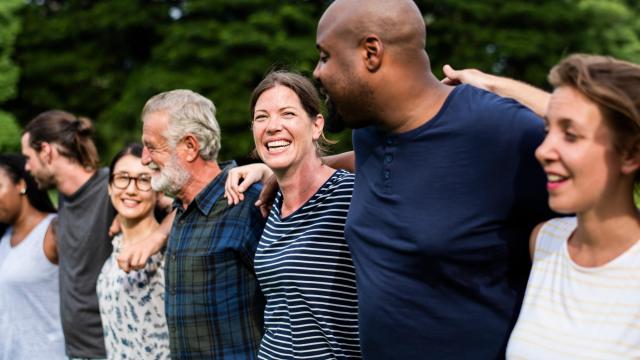 This article was written for our sponsor, KidsPeace.

Sometimes the work you are called to do isn't the work you start out doing. It was this way for Will Hatch, state manager of the North Carolina chapter of KidsPeace, a private charity organization that offers therapeutic foster care, as well as other behavioral and mental health services for children and their families.

In 1997, Hatch was working a corporate health care job that was "financially fulfilling," but left him wanting in other areas. He spent the off hours of his corporate job working part-time as a community-based mental health worker, frequently working with kids from disadvantaged backgrounds.

"When I got the chance to work part-time in the mental health field, I immediately realized that I loved it," Hatch said. "I also realized that some of the kids, as tough and rough around the edges as they might be, that demeanor didn't rattle or bother me. In fact, these are some of the kids that I most enjoyed working with."

His part-time job eventually turned into a full-time position and he got to work making an impact on his community like he'd been yearning to do.

With a background in psychology, Hatch was well qualified to take on the responsibility of working in what he calls "day treatment services." These programs are for children and teenagers who have behavioral challenges, usually as the result of trauma. Many come from disconnected family situations and these kids often have difficulty functioning in the community, at school and at home.

After observing Hatch and taking note of the way he had the ability to connect with children, a co-worker suggested Hatch become a foster parent. Although he has since remarried, Hatch was a single man at the time with biological children of his own and wasn't sure if he was the right fit. But after talking it over with his sons and speaking with a recruiter, Hatch decided to become licensed as a therapeutic foster parent.

"Therapeutic foster care is quite different from traditional family foster care — all of the children that we work with have undergone trauma, and mental health treatment is needed, which is supported through therapeutic foster care," explained Sarah Dowd, a program manager for KidsPeace. "People must recognize these kids are in foster care because of situations that were not their fault or circumstances that were out of their control. They need somebody to understand this and be their parental figure for the period that they're in treatment."

During his time as a KidsPeace therapeutic foster parent, Hatch had three different placements and eventually adopted one of his foster sons.

It's important to note that successful fostering does not always end in adoption and the primary goal of foster care is reunification with the biological family when possible; in other words, Hatch's situation with his last foster son is the exception, not the rule.

In 2015, just as Hatch's fostering years were winding down, the North Carolina chapter of KidsPeace was looking for a new program manager for its Raleigh office. Hatch thought it was a perfect opportunity to help facilitate successful foster situations like the ones he'd been a part of.

"I thought, well, you know what? Maybe there's another way I can continue to help, even if I'm not going to necessarily take a kid into my home anymore," Hatch said. "Maybe I can do this job and work closer with some of the families and still be a part of foster care and help kids whose families are struggling to manage them."

Since accepting the job at KidsPeace, Hatch "hasn't looked back" and is moving the mission of the organization forward — to make a difference and give kids peace. Every day he gets to work in tandem with other dedicated foster care workers like Dowd, who has worked in foster care for more than 20 years — 17 of those years have been with KidsPeace.

Dowd discovered KidsPeace while working as a case manager, as many of her referrals were coming from the organization. Deciding that she wanted to "be on the other side of things and work directly with kids" she took on her first role at KidsPeace.

Over the years, she's had many different job titles at the organization, but today as a program manager, she trains staff and helps case match, placing foster children with the right families.

"I'm pretty passionate about my job," she said. "No two children are the same, so you have to definitely think outside of the box. Our staff is very dedicated to the foster parents as well as to the children. If you don't have good, strong foster parents, you're not going to be able to be a strong program."

Dowd said there's nothing like the feeling of seeing children succeed in a family that loves them as their own after years of hardship. While foster care can get a bad rap, Dowd said she wouldn't be doing the work for as long as she has if there weren't positive outcomes like the ones she gets to witness regularly.

"Several of my foster parents that I've worked with since I've started here are still here, and if you ask them, 'If you were to host a luncheon for every child that you served over your years, how big would your table be?' Some of these foster parents have said, 'It would have to be at a convention hall because the table would be too long for a normal room,'" relayed Dowd.

Dowd and Hatch could probably say the same for the number of children that have impacted their lives over the years.

"What keeps me here and keeps me in this work are the moments when a kid makes the cheerleading squad. Or when the kid graduates high school and is perhaps the first person in their immediate family to do so. Or when the child, who is no longer a child, but a young adult, has a job and is doing really well and is so proud of themselves," Hatch relayed. "Knowing where they came from, what they've experienced, and seeing them overcome obstacles and achieve what some consider 'mundane' things, despite all the odds stacked against them, that's special."

Hatch said he tries to meet people where they are and admits he doesn't have all the answers, but giving kids a chance to succeed invigorates him — even on the hard days.

"Last year we had two more kids that graduated from high school and went off to college. Those are the things that make me so happy. They make me feel like maybe I made a tiny bit of a difference in helping that kid along the way to get to where they are today," he said.

This article was written for our sponsor, KidsPeace​​​​​​​.