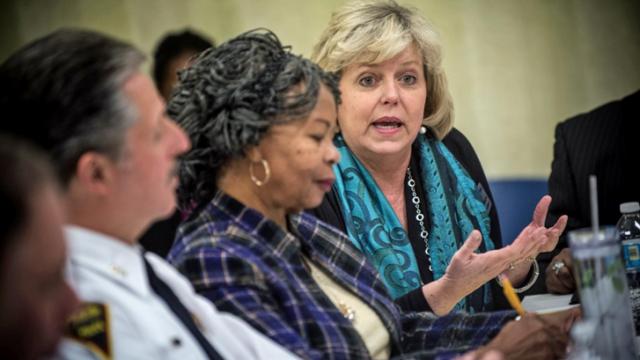 By Andrew Barksdale, The Fayetteville Observer

“I think we have been able to save a lot of young men,” Drayton said. “All these kids want is somebody to show that they care for them.”

Drayton, 53, shared his experiences volunteering at the Great Oaks Youth Development Centers while attending a Thursday forum organized by the Observer as part of its “Seeking Safety” project focused on solutions to the Fayetteville area’s crime problems.

About two dozen community leaders attended the forum at the newspaper, and much of the 90-minute discussion focused on youth who lack opportunities and role models — and too often end up in trouble.

Many in the room — representing local governments, law enforcement, churches, the business community and several social agencies — agreed that the community needs a united effort to tackle problems.

Observer executive editor Michael Adams said the gathering of community leaders was an opportunity to share what the newspaper has found in in its reporting as a means of starting a conversation among people who have influence to take action.

City Councilman Bill Crisp had a stark assessment:
“We are in crisis mode,” Crisp said. “How does this crime affect Fayetteville? In every way possible.”
Adams said the newspaper has a stake in reducing crime.

“We live and work here,” Adams said. “We are proud of and part of this community. So we feel like this is a conversation that we are deeply engaged in.”

The chancellor of Fayetteville State University, James Anderson, listened to the discussion and then declared that his college of 6,100 students would do more to help troubled young people.

“I’m going to put something on the table,” Anderson said. “Fayetteville State will take the leadership ... and we’ll have a summit.”

Sheriff Moose Butler said it was urgent the community do more to help the younger generation find ways to be successful.

Mary Holmes, executive director of the Cumberland Community Foundation, said that crime has many facets and causes, but programs aimed at keeping younger people out of trouble and in school have a proven record of success.

“Our country knows that this model works,” she said. “We just need to do it.”

Cumberland County’s top prosecutor, District Attorney Billy West, said the agencies represented at the forum should set goals on how to drive down crime rates — and be prepared to settle in for the long haul before seeing big results.

“The Memphis model appears to be what would work here,” West said.

In Memphis, officials have been using a strategy called collective impact, in which crime reduction goals and programs are coordinated through a single guiding organization. Memphis officials say their work has not only reduced crime but spurred job creation and improved the health and education of its residents.

Others Thursday talked about the need to improve the appearance of Fayetteville’s older corridors, and they remarked how much better the city center looks today.

Other cities have cleaned up their downtowns, too. Anderson cited Greensboro’s example, and public schools Superintendent Frank Till talked about the renovations done by his hometown of San Diego.

Doug Peters, president of the Fayetteville Regional Chamber, said most companies considering new sites to build are looking at “almost entirely on the livability of a community.” He said he is reticent about talking about crime to prospective clients visiting Fayetteville.

“We almost hesitate to answer the crime question,” Peters said. “It typically always comes up, and when it does, we often don’t hear from that company.”

Robin Jenkins, a Fayetteville resident and former deputy director of the state Department of Public Safety’s Division of Juvenile Justice, said the key to any successful endeavor is personal relationships.