Fortify lane shifts a bit behind schedule, but delays are imminent 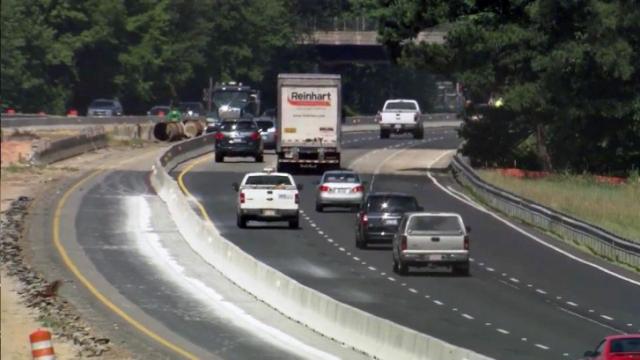 Raleigh, N.C. — Construction in the Interstate 40 section of the Fortify zone has intensified in recent weeks as crews finish up work on Interstate 440, but lane shifts being installed between Lake Wheeler Road and the I-40/440 split have gotten a bit behind schedule.

North Carolina Department of Transportation officials said Friday that lane shifts and reductions are expected to be in place on I-40 East by late August, a few weeks later then originally forecast. On I-40 West, lane reductions may not be in place until September.

Still, officials said drivers should be prepared for increased travel times as crews work their way through the area. Many parts of I-40 that are four or five lanes will be three lanes once lane shifts are complete, something that could add 30 minutes to trips through the work zone during peak travel times.

Despite the "slow and steady" nature of the lane reduction work, other parts of the Fortify project are nearly complete. Work on the I-440 portion of the rebuild should be done by July as crews finish putting down permanent lane markings and "snow-plow-friendly" lane markers. That stretch of highway has been open for some time, but finishing touches are still ongoing.

With the work wrapping up on I-440, the closed ramp lane on Interstate 495/U.S. Highway 64/264 West to I-440 East is in the process of being reopened. That would relieve delays for drivers who use the stretch of highway during the morning commute.

'Badger Breaker' makes debut on I-40

As crews ramp up their efforts to shift lanes and begin repaving on I-40, a 23-ton machine called the "Badger Breaker" is helping crews rip up the highway between Lake Wheeler Road and the U.S. Highway 1 interchange.

The machine uses 12 hammers, each of which weighs between 1,000 and 1,200 pounds, to break up the pavement so it can be recycled and used in new asphalt that will be laid down in the work zone.

“The machine turns the monolithic concrete slab into smaller, more manageable-sized rocks that can be processed further to create a stabilized subgrade,” Amir Nezarati, a senior assistant resident engineer for the DOT, said.