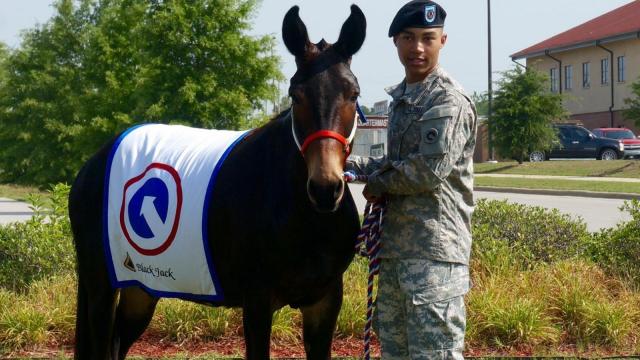 Fort Bragg, N.C. — The 1st Sustainment Command at Fort Bragg welcomed a new mascot Wednesday, a few weeks after the death of its former mascot.

The sergeant mule was the unit’s mascot since 1983, when it arrived as a 2-year-old private. It was donated to the command by retired Col. Robert O. Wary and his wife, Roseanne.

Staff Sgt. John Blackjack died May 31 from a respiratory illness. The animal was honored during the same ceremony Wednesday to welcome its replacement.

Bragg officials said the unit uses mules as mascots because the animals used to carry supplies into the battlefield. The 1st Sustainment Command provides supplies for troops.

Maj. Gen. Darrell Williams said John Huck Blackjack has to prove himself if he wants to rise to the rank of sergeant, like his predecessor.

"As he proves his mettle, as we are sure he will, we know that he will get promoted," he said.