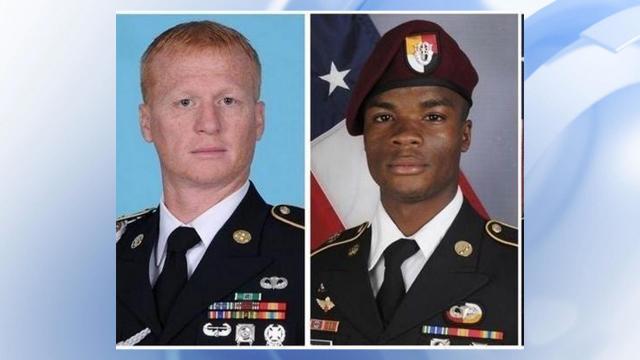 Fort Bragg, N.C. — Two soldiers killed in an Oct. 4, 2017, ambush in Niger have been named honorary Green Berets, according to the U.S. Army.

A ceremony for Sgt. 1st Class Jeremiah Johnson, 39, and and Sgt. LaDavid Johnson, 25, was held in Fort Bragg on July 20, when the soldiers were honored for their bravery. Both were killed in action by enemy combat alongside teammates Staff Sgt. Bryan C. Black and Staff Sgt. Dustin M. Wright

Video released by the Pentagon in 2018 suggests that the team that was ambushed had received intelligence that an ISIS commander was possibly moving into their area.

The video, not previously released to the public, shows the body of Sgt. La David Johnson being recovered from under a thorn tree in Niger 48 hours after he was killed in the ISIS ambush. Footage from a drone overhead showing Johnson's recovery comes at the end of the video as Nigerien forces bring his body out from under a tree and prepare to load him into a truck to return him to American forces.

Sgt. Jeremiah Johnson was a chemical, biological, radiological, and nuclear specialist, and Sgt. LaDavid Johnson was a wheeled vehicle mechanic. They were honored by commanding general Lt. Gen. Francis Beaudette.

“These men represent the very finest our nation has ever produced, stalwart in their dedication to duty, selfless in every aspect of act and of deed, valorous in the face of overwhelming odds and danger, and committed to freeing the oppressed,” Beaudette said.

Family members of the soldiers attended the ceremony and were presented with shadow boxes holding the Green Berets.