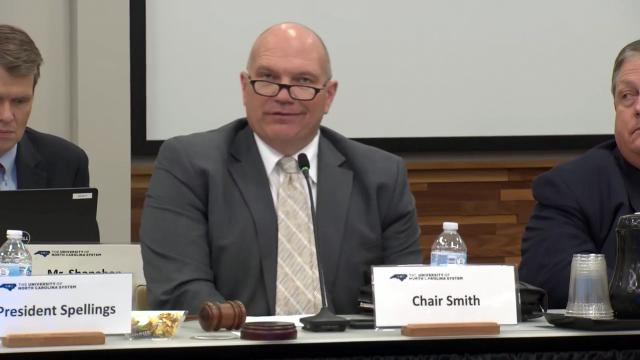 Chapel Hill, N.C. — University of North Carolina Board of Governors member Harry Smith, who resigned as board chairman at the beginning of October, said Monday that he will leave the board entirely early next year.

Smith said he doesn't have time anymore to be on the board and that he plans to leave Feb. 1.

"I started my own private equity firm, and I just can't keep spending all this time," he said.

New Board Chairman Randy Ramsey said in a statement that Smith agreed to serve until February or until the General Assembly picks a replacement.

Smith relinquished the board's chairmanship earlier this year but said at the time he planned to stay on as a regular member. On Monday, he said he told Ramsey and others at the beginning of 2019 that he didn't plan to serve in 2020 and that the double resignations were a two-part plan.

Ramsey said in his statement that Smith "has tirelessly served this Board, University System, and state for the past seven years for the betterment of our students" and that he "worked collaboratively to show that differing views and opinions are healthy for any organization – to ensure all voices are heard and great decisions are made."

Smith's time as chairman was a tumultuous one, and his public resignation announcement came on the same day reports surfaced linking him to Peter Romary, a private attorney who has run afoul of the University System's administration.

Romary's push for security footage from downtown Greenville figured in the recent resignation of ECU Interim Chancellor Dan Gerlach. The University System's in house attorney sent Romary a pair of cease and desist letters over the last week accusing him of falsely saying he represented members of the Board of Governors and ECU Board of Trustees.

The letters were first reported by WBTV. Smith told the station that he retained Romary on a previous issue, but not on the Gerlach matter.

Smith, who graduated from ECU, told WRAL News Monday that he "didn't have anything to do with that in any way shape or form."

Romary, he said, "always contacted us and I've always sent that straight to the system office.

"And we've not paid him a dime," Smith said. "Not one single time have we ever asked him to do anything."