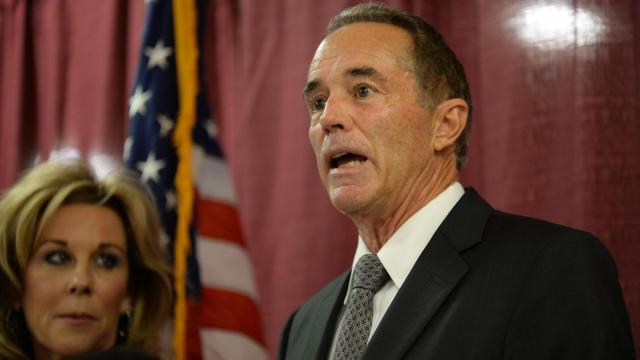 CNN — The first sitting congressman to support President Donald Trump's bid for the White House was sentenced to 26 months in prison on Friday after pleading guilty to federal charges in an insider trading case.

"You had a duty and you betrayed that duty," Broderick said, additionally slapping Collins with a $200,000 fine and a year of supervised probation upon his release.

Collins, 69, admitted to sharing non-public information with his son about a failed drug trial they were investing in. He emotionally addressed the court, saying in part "now I stand here today as a disgraced former member of Congress."

The former Republican lawmaker pleaded on behalf of his son and blaming himself for putting his family in this situation. In the nearly three-hour hearing, he spoke for mere minutes and begged his wife and daughter for their support, asking them to please stay with him.

Geoffrey Berman, the US Attorney for the Southern District of New York, accused Collins in a statement Friday of showing "greed and disregard for the law."

"Lawmakers bear the profound privilege and responsibility of writing and passing laws, but equally as important, the absolute obligation of following them," Berman added. "Collins's hubris is a stark reminder that the people of New York can and should demand more from their elected officials, and that no matter how powerful, no lawmaker is above the law."

Collins resigned from Congress ahead of the guilty plea. By pleading guilty, Collins avoided a broader set of charges from the superseding indictment, including securities fraud, conspiracy to commit wire fraud and wire fraud.

Collins admitted to having given his son nonpublic information about the failed results of a drug trial, which Collins had obtained by virtue of his position as a board member of the pharmaceutical company Innate Immunotherapeutics Limited.