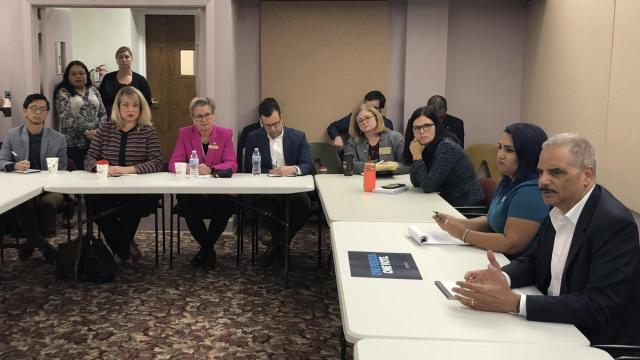 Holder, who served under former President Barack Obama, met with activists in Raleigh and Greensboro. He's chairman of the National Democratic Redistricting Committee, making him the Democratic Party's point man on redistricting reform, gerrymandering lawsuits and state legislative fights heading into the 2020 elections.

Those elections will decide control of state legislatures, and thus a decade's worth of election maps for legislative and congressional districts across the country. His group, with backing from the former president, has funded lawsuits and election campaigns with the overarching goal of electing Democrats and undoing maps his side sees as unfair Republican gerrymanders.

When that's done, Holder said Thursday, he hopes to see nonpartisan redistricting reform take hold in more states. He said he favors an independent commission that takes the power away from elected officials to draw their own districts.

“We’ve got to get back to a place where elections are simply fair," Holder said.

Republicans have criticized Holder's effort as a partisan one, geared toward electing Democrats whether the maps are fair or not. A spokesman for Senate President Pro Tem Phil Berger, with whom Holder sparred a bit on Twitter last month, asked Thursday "how many times Eric Holder has hosted a roundtable in blue states."

"It’s probably equal to the number of blue states he’s sued, which is zero," Pat Ryan said in an email. "Holder’s support for ‘fair maps’ is a phony front to help Democrats win more elections."

Holder hasn't shied away from the partisan nature of his effort. He told those gathered in Raleigh that "it sounds kind of strange, but this is a partisan attempt at good government.”

He also noted after the event that he's spoken out against Democratic gerrymandering efforts in New Jersey and Maryland. He acknowledged that his group hasn't backed lawsuits over maps in states controlled by Democrats.

Four state legislators were at the Raleigh gathering, including Rep. Deb Butler, D-New Hanover, who got some national fame last month when she shouted "I will not yield" as House Republicans took a surprise vote to override Gov. Roy Cooper's budget veto. Holder told her Thursday that, "you're my hero."

The most heavily repeated message: Redistricting effects everything. With control of the maps, and control of the General Assembly, advocates said, North Carolina Republicans have tightened regulations on abortion, loosened rules on guns and pollutions and blocked Democratic efforts to expand Medicaid and extend taxpayer-funded health insurance to hundreds of thousands of people.

Holder agreed and said he wants local groups to identify people personally affected by those laws – and thus affected by gerrymandering. Their stories can help bring the issue home for people, Holder said.