Clayton, N.C. — He was there at the right place and at the right time to give a child who was pulled from the waters at the beach the breath of life.

A former nurse from Clayton was at the beach this weekend when he came across a child who had nearly drowned. His training kicked in, and he's thankful to have played a small part in saving the child.

Derek Gibson was out on Holden Beach in Brunswick County for one last lounge before heading home to Clayton. He was there with his wife and two daughters and noticed a tense crowd gathering a few yards away. 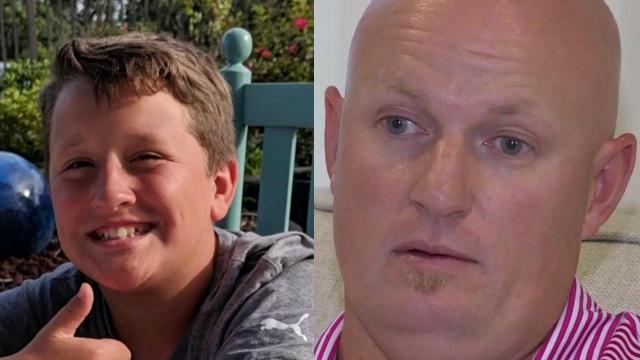 There was a 12-year-old boy lying on the sand barely alive.

"I noticed he was pretty blue," Gibson said. "You could tell he wasn't breathing."

Not only that, his pulse was terribly faint. As a former Duke Life Flight nurse, Gibson knew he had to get this child's lungs working ASAP. Another nurse happened to be on the beach and gave him CPR, causing him to vomit water.

"But at that point, he didn't have breathing to the point that it would have sustained life for him," Gibson said.

So he grabbed an oxygen kit from paramedics and put the mask over the boy's face. He climbed into the back of a pickup with the child to meet an ambulance.

The boy, Levi Floyd, lives outside Winston-Salem and suffers from asthma.

"I drowned and I was gone," Floyd said. "I was just blue all over."

In a FaceTime phone interview, Floyd said he was out with his cousin, diving into waves.

"When it was my turn to dive into the wave, I ended up not coming back up," Floyd said.

His cousin yelled for Levi's dad, who scooped him out of the water. He'd been under for about a minute. Floyd's mother, Lyndsey Floyd, felt helpless.

But something did happen. Something beautiful.

"So my brother and my sister and my cousins, they all started singing and praying," Levi Floyd said. "And they were like 'Jesus, please let him be OK."

Levi spent two days in the hospital. The former Duke flight nurse, who helped give him the breath of life, also spoke with the boy on FaceTime.

"Today, talking to that little boy and knowing he's gonna be OK ... that will stay with me forever," Gibson said. "That Levi is making a recovery, a full recovery is nothing short of a miracle in my book."