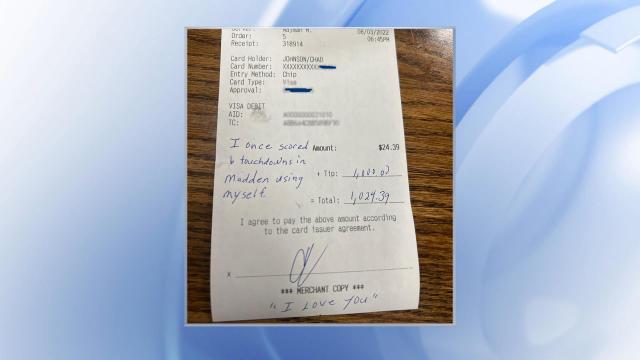 Greensboro, N.C. — A former NFL star left a $1,000 tip at a Greensboro restaurant on Wednesday night as a way to say thank you to a restaurant that's served him well.

Chad Johnson, also known as "Chad Ochocinco," played for Cincinnati Bengals, the New England Patriots, and the Miami Dolphins between 2001 through 2012. He was in town for the AAU Junior Olympic Games at North Carolina A&T this week.

He dines at Stephanie's Restaurant on Randleman Road each year during the AAU, according to owner Stephanie Hall.

"We always enjoy him when he comes in," she said.

This time, Johnson came into Stephanie's Restaurant by himself. Only a few of the staff members recognized him from his NFL days, Hall said.

Hall said every part of that tip went to his server and the floor manager, Najmah.

"She talked about that all night," Hall said.

At the bottom of Johnson's receipt he wrote, "I scored touchdowns in Madden using myself" and "I love you," according to a tweet Johnson posted.

He quoted in the tweet Proverbs 11:25, a Bible verse that says, "A generous person will prosper; whoever refreshes others will be refreshed."

Hall said that after Wednesday night, Johnson is part of the Greensboro family.