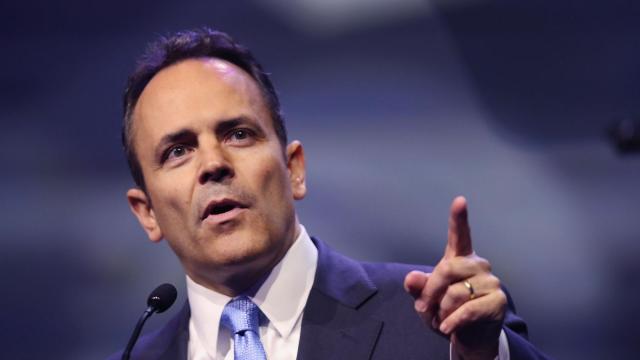 CNN — Former Kentucky Gov. Matt Bevin issued hundreds of pardons and commutations of sentences in his final days in office after his November defeat to Democrat Andy Beshear, some of which are for violent offenses.

The Kentucky secretary of state's office began filing the majority of these executive orders into their public system on December 11, their website shows.

The office says due to the high volume of final actions by Bevin, the documents are still being processed.

According to the secretary of state's website, as many as 161 pardons and 419 commutations of sentences were filed on December 11, including commutations for 336 people who were serving sentences solely for drug related charges.

When a governor signs an executive order, it goes into effect at that time, the secretary of state's office said.

CNN has reached out to Bevin and has not heard back.

Prosecutor Rob Sanders of Kenton County told CNN on Friday that prosecutors across Kentucky have filed an open records request to receive the complete list of pardons and commutations. He said prosecutors have been trying to obtain this list since Tuesday.

The Louisville Courier Journal first reported the number of pardons and commutations.

That list of pardons includes Blake Walker, who was convicted in 2003 of killing his parents; Kurt Smith, who as a teenager was found guilty of murdering his 6-week old son; Delmar Partin, who was convicted of beheading a woman and stuffing her in a barrel; and Kathy Ann Harless, who left her newborn baby to die in an outhouse.

The former Republican governor wrote in his executive order that Harless "has paid enough for her death of her new-born son."

Bevin pardoned and commuted the sentences of Dayton Jones, who was convicted in 2016 of sexually assaulting a 15-year-old boy; and Patrick Baker, who convicted of reckless homicide in 2017. The Courier Journal reported that Baker's family had held a fundraiser and donated to Bevin's gubernatorial campaigns. Baker served two years of a 19-year sentence, while his co-defendants are still in prison, the newspaper reported.

The former governor did the same for Micah Schoettle, convicted last year of raping a child and sentenced to 23 years in prison.

"Micah Schoettle was tried and convicted of a heinous crime based only on testimony that was not supported by any physical evidence," Bevin wrote in his executive order signed December 9. "In fact, any and all evidence that is available, refutes the allegations that were made." He added that the case was investigated and prosecuted in a "manner that was sloppy at best."

Schoettle's trial had included testimony from the victim, according to the Northern Kentucky Tribune. Schoettle had served fewer than 18 months.

The victim's mother called the pardon a "slap in the face," CNN affiliate WCPO reported.

"It feels like we're going through it all over again ... we just got to the point where we felt safe leaving the house and not looking over our shoulders," she told WCPO.

Bevin told The Washington Post he made the decision because he's a "big believer in second chances."

"I think this is a nation that was founded on the concept of redemption and second chances and new pages in life," he told the Post. "If there has been a change and there's no further value that comes for the individual, for society, for the victims, for anybody, if a person continues to stay in, then that's when somebody should be considered for a commutation or a pardon."

Bevin's last day in office was Monday. A spokesman for his campaign didn't comment to the Post.

In an executive order signed December 9, Bevin commuted the sentences for 336 inmates who are "solely serving" sentences for drug possession — and majority of the pardons Bevin issued are for drug-related convictions.

He pardoned a Louisville community activist, Christopher 2X, who Bevin called "a man with a heart for community service."

"He has turned his life around after a rocky start many years ago and he has paid his debt to society," Bevin wrote of Christopher 2X, who had prior convictions for drug possession and theft by failure to make disposition.

Amanda Hall, an organizer for the American Civil Liberties Union of Kentucky, also received a pardon for her previous convictions of drug possession in 2009 and drug trafficking in 2011.

"I hope that the governor to come sees the example that you have given us about redemption and second chances and this is one of the best days of my life and thank you," she said in a video retweeted by the organization.

"I hope sooo many more people get to feel this beautiful feeling that I have," Hall said on Twitter.

But many have been critical of the former governor's move.

"What this governor did is an absolute atrocity of justice," Prosecutor Jackie Steele told the Post. "He's put victims, he's put others in our community in danger."

Prosecutor Eddy Montgomery told the newspaper that he informed the victims' families about the pardons after finding out through the news.

Bevin conceded to Beshear last month after requesting all of the state's counties recheck the results of the gubernatorial election.

In a tweet Thursday, the Democratic Governors Association said Bevin "kept standing with special interests until the very end -- even at the expense of Kentuckian's safety and wellbeing."

Bevin's successor, newly elected Gov. Andy Beshear, on Thursday announced he restored voting rights for over 140,000 former felons in the state through an executive order.

Beshear's father, former Gov. Steve Beshear, had issued an executive order in 2015 restoring felons' voting rights, but Bevin promptly reversed it with his own executive order upon taking office later that year.

UPDATE: This story was updated Friday with new information on the number of pardons and commutations filed as it became available from the Kentucky Secretary of State.