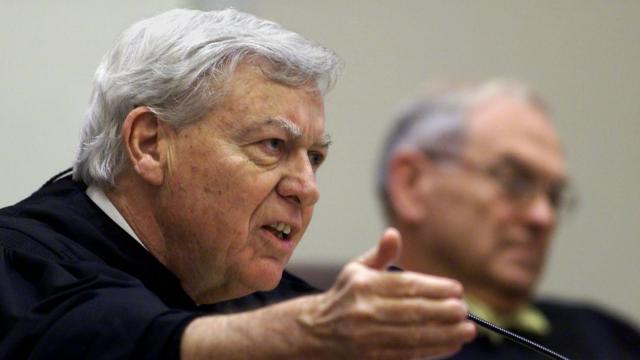 CNN — The former chief justice of the Florida Supreme Court is warning that President Donald Trump poses a "grave and real threat to our democracy" because of his threat to not accept the outcome of the election.

"I set out my thoughts here because I am compelled to believe that our country, and thus our children and grandchildren, face a grave threat to keeping the kind of representative democracy that we have experienced in our life," Charles Wells wrote in a letter sent to friends this weekend and provided to CNN. "I do not believe that we have had as serious a threat during our lives."

Wells added that he believes only a significant victory by Joe Biden will prevent Trump from succeeding in undermining the legitimacy of the election.

"The only way that I can see that this threat can be eliminated is to vote for Biden," Wells wrote. "It will not be enough to just not vote for Trump. Any basis for a contested election can only really be eliminated is by the election not being close. "

Speaking to CNN's Alisyn Camerota on "New Day" Monday, Wells said he has concerns that this year's election could be even more contested than 2000.

"The thing that also bothers me is the statements that there's not going to be, if Trump loses the election, a peaceful transfer of power," Wells said, adding, "We are depending upon people voting and those votes being counted expeditiously."

Democrats in recent weeks have prepared for legal challenges in the event Trump contests election results. They are bracing for a wide range of scenarios, covering everything from Trump trying to deploy federal law enforcement officials to the polls, to Republican state legislatures overruling a state's popular vote, to Trump declaring victory on election night when millions of mail-in ballots still have to be counted.