Former employee accused of embezzlement at NC Department of Revenue 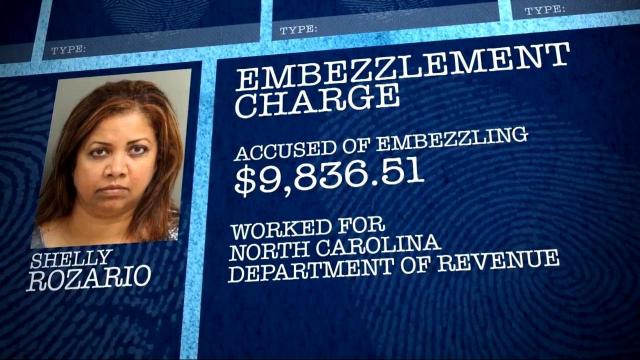 Raleigh, N.C. — A Garner woman has been accused of embezzling nearly $10,000 from the North Carolina Department of Revenue.

Officials said Shelly Rozario, 54, of Garner, worked as an administrative associate for the department. The state says her position was temporary, and she is no longer an employee.

Rozario was charged Sept. 24 and is accused of embezzling the money between Jan. 1-Sept. 11 of 2019. The amount totaled $9836.51 and came in the form of money orders submitted by taxpayers to the NCDOR, officials said.

Officials said they acted on a tip by the agency’s Tax Fraud Hotline. Rozario was fired on Sept. 11.

“Theft is a breach of the public trust, something the department takes very seriously,” said Revenue Secretary Ronald G. Penny. “We believe this to be an isolated incident and we have made changes, such as installing additional cameras, to prevent something like this from happening in the future.”

Rozario appeared before a Wake County magistrate and was placed under a $20,000 bond. She had a court appearance on Wednesday.