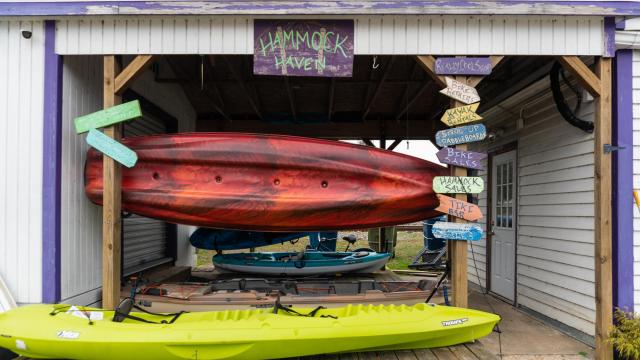 Liane Harsh, when she first started, had no idea how to run a business.

A former physical education teacher and coach in Fort Lauderdale, Fla., Harsh moved to Washington, N.C., on somewhat of a whim. Now, nearly 15 years later and with a successful business to her name, there's nowhere else she'd rather be.

For Harsh, it all started in 2006 with a simple vacation to visit friends — Harsh is close with the owners of Backwater Jack's Tiki Bar and Grill, who also moved to the area from South Florida. The group got to talking about a building that Harsh's friends had recently purchased, right next door to their bar and grill. From there, a casual conversation became one of the defining moments in Harsh's life.

"They said, 'What would you do if you could do anything you wanted with that building?' So I said I'd open a kayak shop," Harsh recalled. "Then they told me, 'Well, we bought it. If you want to do something with it, it's there for you.' It was one of those pivotal moments in life. I had been teaching for 14 years, and I was either going to continue doing that or leave," she said.

Soon after that conversation, Harsh made up her mind, resigned from her teaching job and nine months later moved to her new home in Washington.

The building Harsh took over boasts a location right by the waterfront along Main Street. Dubbed Inner Banks Outfitters, the store offers kayak, paddleboard, and bike rentals, as well as equipment repairs and a range of products like life preservers and sunscreen.

Harsh never had plans or training to be an entrepreneur, but was able to draw from the mentalities she developed as a coach and physical education teacher. While she has seen her fair share of challenges over the years, she's taken care to emphasize the importance of teamwork, which, for her, is where the success of Inner Banks Outfitters lies.

"Learning how to run a business is always evolving. You're never not learning and if you do stop learning, then you're probably doing something wrong. Even now, that challenge continues, but I have a bookkeeper, an accountant, the right insurance agents — I have all those people lined up, so that when I do run into issues, I know who to ask," Harsh said. "I stick with my strengths, and I rely on the strengths of the people I have on my team. Since I'm an ex-P.E. teacher and coach, thinking of business from that perspective is what works for me."

Interacting with the community at large has always been a priority for Harsh, whether through teaching paddling classes in partnership with Beaufort Community College or hosting special events at the shop.

After dabbling here and there, and learning what events brought the most interaction, Harsh struck gold and with the help of another small business owner just down the street, was able to bring new life to her idea.

"Our biggest thing has been the wine and cheese paddle to Castle Island. We set up a whole spread of wine and cheese and crackers, and we'll paddle up, sit down and have a glass of wine, then watch the sunset as we paddle back," said Harsh. "This last year, Mary from Wine & Words — the Wine Fairy — has been coming and doing wine tastings, so we've really taken it to the next level, and people love it."

"At the end of the day, there's just a good network of local business owners here, and everybody tries to support each other," Harsh finished.

Initially, this support came as a pleasant surprise to Harsh. Coming from Fort Lauderdale, she was accustomed to seeing the small business community get lost in the noise of larger competitors. In Washington, however, everyone's on the same team — from employees to colleagues to community members — and it's a team that Harsh couldn't be more grateful to be a part of.

"There are moments where it's chaotic, but for the most part, somebody comes into my shop, and we have a whole conversation — it's not me selling them a product, but there's a connection that happens, and then you do business," Harsh said. "Sometimes people come to my shop, and their intention is not even to spend money. It's to talk, you know, 'I'm stopping by, I'm out doing my rounds, where's the sweet tea?’ — that sort of thing. People in this town, whether they're business owners or not, they love that small-town feel, and they don't want that to go away. They really are committed to supporting the businesses here, and I can't say enough about that."

"This was actually just finished a few weeks ago, but I raised my sheds, so now my main building is on the ground, and my sheds are up in the air with decking all around them. I'm in for the long haul now," Harsh said. "It cost a nice chunk of change, but it was an investment in my business, an investment in peace of mind, and an investment in the community as well."

While Harsh may not have been born in Washington, it's her home now. And much like her new-and-improved buildings, it's one that she's put permanent roots down in.

"I feel like one of the questions people ask me all the time is, 'Are you from here?' Because clearly I'm not — I'm from Ohio originally, and you can hear it in my voice," Harsh said. "But I always say, 'I'm not from here, but I'm probably going to die here.' I may not have been a part of the initial group, but I'm in, and that's one of the things I love about this town."