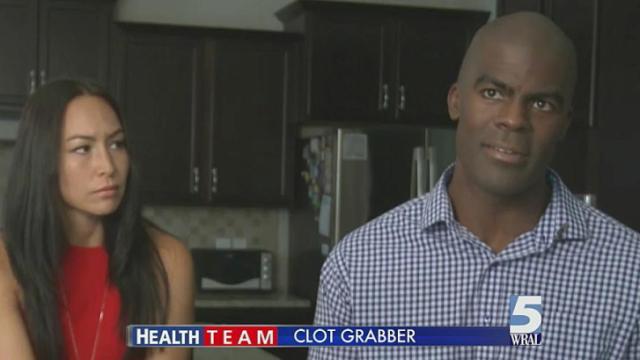 Raleigh, N.C. — Quincy Monk, a former linebacker with the New York Giants and a husband and father of two, was among the last people anyone would have expected to suffer a stroke.

Last June, Monk, 36, was ironing a shirt at his home when the iron fell out of his hand.

"It just came out of nowhere," he said. "Mentally, I was like, 'What's wrong with this iron?' Rather than, 'OK, I have numbness in my arm.'"

Then his wife Lisa saw him.

"He was sweating. He was disorientated, and it was really like he couldn't focus," she said.

Lisa immediately took her husband to Rex Hospital where doctors found a large clot blocking blood to part of his brain.

Doctors gave him a clot-busting drug, but told Lisa her husband needed something more than they could offer.

Quincy Monk was transferred to Duke Raleigh Hospital where a specialist could pull the clot out. Duke neurosurgeon Dr. Ali Zomorodi was ready and waiting with a device called Solitaire.

"Once the catheter is through the clot, then you deploy the stent," Zomorodi said.

The clot gets enmeshed in the stent and is then pulled out, he said.

Doctors said Monk might have lingering disabilities and will face months of therapy following the procedure. But his wife said it only took a few hours to see improvements.

"Every hour his speech and his sharpness just kept coming back," she said.

Doctors have not found a cause for the clot, but said the family's quick response allowed Rex and the Duke staff to work together to offer Monk potentially life-saving therapies.

A recent New England Journal of Medicine study found that the endovascular stent procedure used on Quincy Monk is better than the clot busting drug t-PA when treating large clots.