McCabe: 'I think it's possible' Trump is a Russian asset 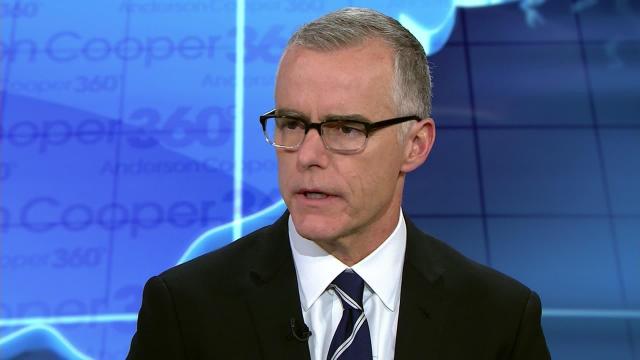 "I think it's possible. I think that's why we started our investigation, and I'm really anxious to see where (special counsel Robert) Mueller concludes that," McCabe said.

It's another bombshell comment from McCabe, which comes days after he outlined on Sunday to CBS the reasons top US officials decided to open a counterintelligence prove and obstruction of justice investigation into the President.

McCabe is promoting his new book, "The Threat," which paints a stark portrait of his time at the bureau under Trump, describing in vivid detail his version of interactions with top officials at the White House and Justice Department. The book was released Tuesday and became and instant best-seller.

The former acting FBI director has raised eyebrows following that interview on CBS' "60 Minutes" when he said Deputy Attorney General Rod Rosenstein raised the idea of wiring himself to surreptitiously record interactions with the President and mused about which Cabinet officials might support an effort to invoke the 25th Amendment to oust Trump from office. Rosenstein has previously said that comment was mischaracterized.

McCabe took over as the leader of the FBI when Trump fired James Comey in May 2017. McCabe was pilloried throughout his time leading the department and was eventually fired in 2018, just days shy of his announced retirement date. He's under criminal investigation by federal prosecutors in Washington, DC, for misleading investigators in their probe of the FBI's handling of the investigation of the Clinton Foundation.

McCabe had harsh words for the President during his interview with Cooper, charging Trump with undermining the country's top law enforcement agencies for political gain.