Chapel Hill, N.C. — A 500-year-old stone linked to North Carolina's Lost Colony at Roanoke could be hidden in the walls of a century-old amphitheater in the Triangle.

Nestled in the woods, just around the corner from the historic Gimghoul Castle, the Forest Theatre in Chapel Hill looks like something out of a fairytale.

The stone walls and tall towers can just barely be seen peeking through the autumn trees – making it appear almost like a castle itself – and while generations of UNC students have enjoyed the historic space, many people visiting Chapel Hill have driven right past it without even noticing.

Like many theaters, this relic is full of legends – some more true than others. One legend dates one "secret" stone in the theater's wall back to the Lost Colony of Roanoke, and possibly to Sir Walter Raleigh himself. 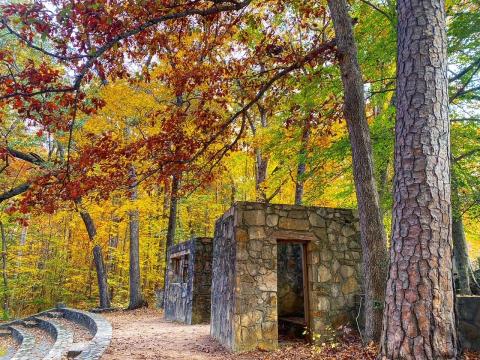 A swampy forest was the original theater

While hundreds, or even thousands, of students and families have spent countless hours enjoying shows in the open-air theater, it's still considered something of a secret. According to The Daily Tar Heel, "the stone amphitheater has existed for nearly a century, and many students aren’t even aware of it."

Before the two-story stone towers and cobbled walls were constructed, there was a time when the "Forest Theatre" truly was in a forest. According to a description written in 1953 by Betty Johnson in the N&O, the site was at the "bottom of a wooded bowl" and "rather swampy." But enthusiastic drama students built a wooden stage over marshy ground, with a little stream and the surrounding trees creating a natural backdrop for the play's set. 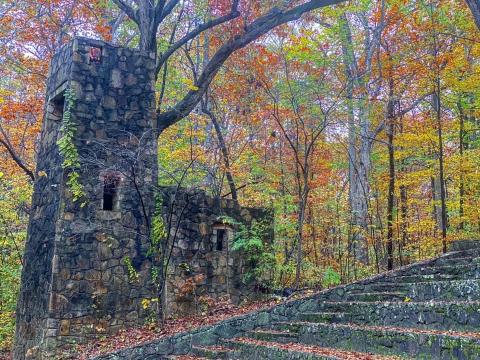 The audience sat on blankets and towels on the surrounding hillside to eagerly watch the first show, which was put on in 1916 to commemorate the 300th anniversary of Shakespeare's death.

It wasn't until 1919 that a permanent theater structure was placed on the land.

UNC's drama professor Frederick Koch and botany professor William Coker, joined forces to create the first vision of the Forest Theater. Their mark on the community's history is still seen today – with the Forest Theatre taking on Koch's namesake and the Coker Arboretum, just a stone's throw away from the theater, honoring Coker at the North Carolina Botanical Garden.

Koch taught at UNC for over two decades, using the theater space for the student troupe, the Carolina Playmakers. 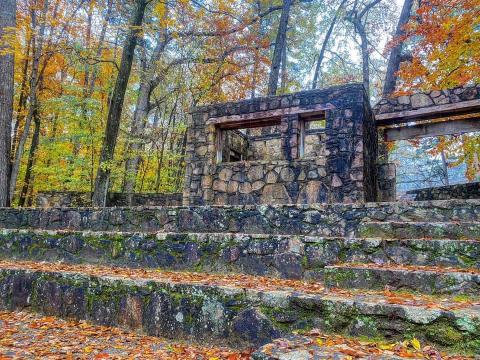 A stone from the Lost Colony of Roanoke

Decades of history are hidden in the Forest Theatre's stone walls. The stones themselves were quarried from the ground in the nearby community. Some legends and historians say the stones actually come from the original "hill" from which Chapel Hill takes its name.

Many of the impressive stone walls seen today were built during the 1940s, when additions and improvements were constructed with $20,000 worth of WPA funds in 1940 – and more additions in 1948.

While most of the stonework is from native stones, there is one "secret" stone that could date back to North Carolina's first colony – our Lost Colony at Roanoke. 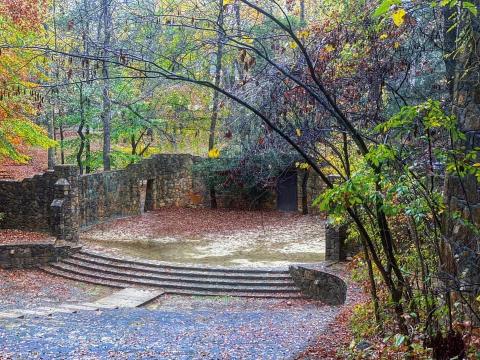 According to a website and book created by UNC Archivist Nicholas Graham and Cecelia D. Moore, former university historian at UNC, "During that work, designers added a stone brought from Roanoke Island that is believed to be a ballast stone from the ships that carried Sir Walter Raleigh's first colonists in the 1500s."

The designs were created by Albert Q. Bell, who also designed the Waterside Theater on Roanoke Island, where popular "The Lost Colony" production is performed. It seems possible, given Bell's connection to Roanoke Island, the story about the stone's origins could have some merit.

The stone can be found at the top of the seating area, overlooking the entire theater. Clearly different from all the native Chapel Hill stones, it's round and smooth instead of flush to the wall, and it's cream-colored instead of gray. It certainly matches the appearance of other ballast stones used in that time period. 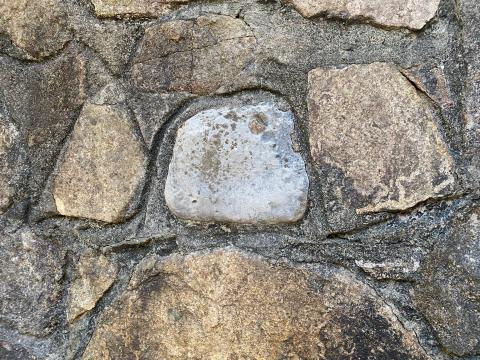 Ballast stones have been found along the North Carolina coastline, remnants removed from colonial ships as they made port. Sir Walter Raleigh funded several trips to colonies in North Carolina in the1580s, meaning it is possible at least one of those ships left ballast stones behind.

However, some historians argue that, while the coastline waters are full of ballast stones dumped by ships from the colonial time period, it's unlikely the Roanoke ships would have dropped any ballast stones. It's possible, then, that Bell did indeed put a ballast stone in the Forest Theatre, but that it was only rumored to have been from Roanoke. It could have simply been a historic ballast stone – still hundreds of years old and very historic, but not necessarily connected to the Lost Colony of Roanoke.

"Near the entrance to Shallowbag Bay on Roanoke Island there is a spot called Ballast Point, so named for the mass of discarded ballast stones," writes Brandon Fullam in his book A Lost Colony Hoax. "Since the 18th century, local lore has alleged that these ballast stones were from Raleigh's first two expeditions to Roanoke."

Fullan argues that the ships that left England bound for Roanoke were already loaded with heavy equipment for the colony and likely would not have needed many, if any, ballast stones. 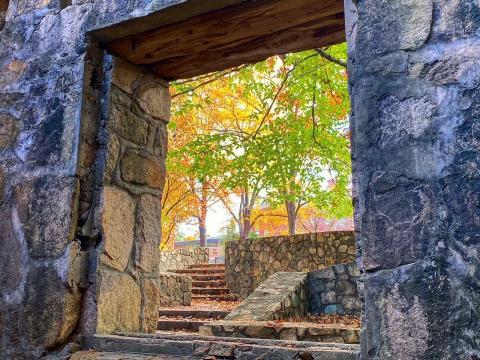 It seems true that Bell brought a ballast stone from Roanoke to install in the Forest Theatre – but is it possible he, himself, was a believer in a myth that dates back to the 1700s? If so, the myth is roughly 300 years old, while the stone is around 500 years old. Arguably, the myth is as historic as the stone itself – and still part of the Lost Colony history and folklore that pervades North Carolina's roots and culture.

Regardless, the Forest Theatre has mysteries hidden in its walls that date back to the 1500s. Like any good theater, it will likely hold those mysteries for decades to come – and collect a few more along the way.

North Carolina has its very own version of Stonehenge –a mystic spiral of stone pillars known locally as Hartleyhenge.

Just around the corner from the Forest Theater is Gimghoul Castle. Around the same age as the theater, the castle was built in the 1920s, and it has even more mysteries and legends than the theater.

Castles across North Carolina: Exploring the state's most enchanting castles
SUGGEST A CORRECTION