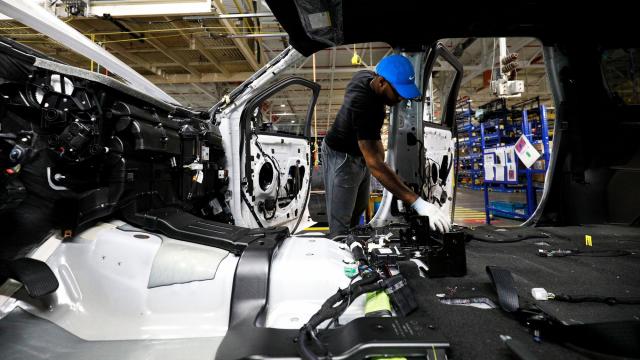 The United Auto Workers union announced that 56.3% of members at Ford voted to approve the deal. Workers at only a handful of factories voted to oppose it. Support for the deal is much stronger than four years ago, when only 51% of Ford workers voted for that labor contract.

The contract, which covers 55,000 union members, gives veteran workers a 6% raise over the length of the contract, as well as a $9,000 signing bonus. That signing bonus is less than the $11,000 that workers at GM got, but those workers were on strike for nearly six weeks and lost much more than the $2,000 difference in lost wages.

The deal also allows workers hired since 2007 to more quickly get to the same pay scale as veteran workers than they would under the previous contract. And it allows for some temporary workers to be hired on as permanent employees.

"This is a life changing contract for many," said Rory Gamble, the acting president of the UAW who was the union's lead negotiator with Ford. He said no longer will there be a two-tier wage system at Ford or workers permanently stuck as temporary workers.

Overall, the union estimates that the average Ford worker will get $30,000 in additional wages and benefits over the life of the contract.

Ford has typically had the best relations with the union among the three unionized US automakers. Workers there have not gone on strike since 1976.

The union will next try to reach a deal with Fiat Chrysler, the third automaker whose members are represented by the UAW. Those talks have been making progress, but they have yet to be the focus of union negotiators while the talks and ratification at GM and Ford took place.

The Ford deal was reached within days of the GM strike ending, and it's possible that a tentative deal at Fiat Chrysler could also be announced in short order.

But far more of the workers at Fiat Chrysler have been hired since 2007, and thus are being paid at a lower pay scale than the veteran workers. So it will be more costly for Fiat Chrysler to agree to match the deals reached at GM and Ford.

The Fiat Chrysler talks could also be complicated by recent plans announced by the company to merge with French automaker PSA Group, the maker of Peugeot cars.