For Wilson, baseball is a way of life 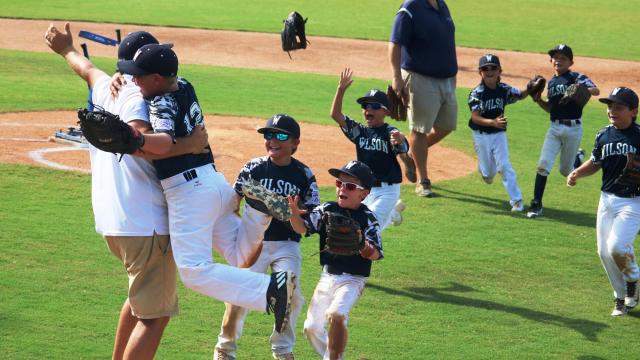 The City of Wilson knows a thing or two about baseball. With its impressive Fleming Stadium, year-round leagues and Friday night lights, this eastern region has become a baseball cultural hub.

Throughout the year residents and visitors enjoy events, leagues and sandlot pick-up games dedicated to "America's favorite past time." But peak season for Wilson's baseball culture is summer. These seasonal months bring both fireflies and fly balls, and children and adults alike join in on the fun.

Celebrities gather in Wilson to golf, eat and support baseball

Each year, Wilson's Wedgewood Golf Course hosts its annual golf fundraiser. The tournament, which has been in operation for 16 years, brings together celebrities and donors from around the area to support the North Carolina Baseball Museum, located in Wilson.

Johnny Grubb, 1974 National League All Star and 1984 World Series Champion with the Detroit Tigers, drove down from Richmond, Va., to participate. Grubb spoke of the great baseball culture of the area and how many of his teammates over the years were from N.C.

Bob Harris, known for 42 years as the "voice of the Blue Devils" for his legendary announcing of Duke University sports, was also in attendance.

"I've been involved with this project from the beginning," Harris said of the museum. "It's really grown, and I think that's strictly due to the people in this community. So many people think you've got to put a museum in a big city like Charlotte or Raleigh, but you don't. This is a hotspot of baseball in North Carolina because North Carolina is a baseball state, and Wilson is really a baseball town."

A few miles down the road from the golf tournament stands the N.C. Baseball Museum.

With more than 6,000 items of memorabilia (a statistic that is routinely growing), it is a testament to a city and a state passionate about baseball. Not only are there local artifacts and mementos from nearly every professional player to call N.C. home, but also items significant to the game in general, including a couple display cases with Babe Ruth memorabilia.

George Herman "Babe" Ruth, also known as the Great Bambino, is arguably one of the most famous baseball players of all time.

The museum can be found just over the left field fence at Fleming Stadium. Wilson's longstanding stadium is home to their minor league team, the Tobs, who play in the Coastal Plain League.

College athletes from along the East Coast get to experience Fleming Stadium's grandeur during its collegiate summer league that attracts applicants from Virginia to Georgia. Fleming Stadium also hosts the Hot Stove League Banquet, another fundraiser for the museum.

The Banquet brings together celebrities, little league champions and other baseball fans from the area. Field, sandlot or dugout — Fleming Stadium is a buzzing place to be.

For Wilson little leaguers, summer is a homerun

Little leagues are another major part of the baseball culture in Wilson.

The J. Burt Gillette Athletic Complex is known nationally as a state-of-the art facility capable of hosting large tournaments on its numerous fields. Last summer alone, two different statewide little leagues chose the field to host their championships, as did the District 6 tournament.

Just like the Sandlot movie characters Scotty, Benny and Squintz, young kids have the opportunity to experience the magic of baseball come June.

It's undeniable that baseball is a game enjoyed by people of all ages and backgrounds; and this summer, Wilson residents and visitors — from retired professional legends to young sandlot heroes — can experience the game that has stood the test of time.