For Trump, Dutiful Words of Grief, Then Off to the Next Fight 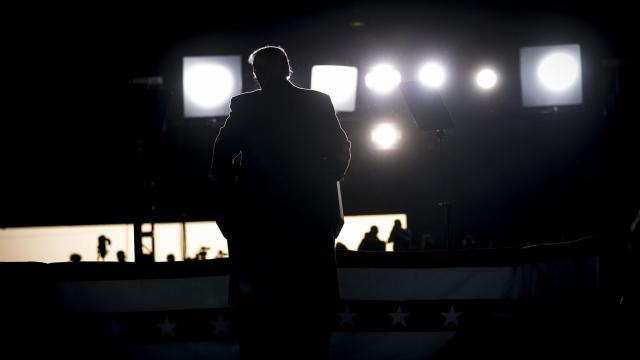 WASHINGTON — For months, Republican officials have complained privately that President Donald Trump lacks the ability to confront moments of crisis with moral clarity, choosing to inflame the divisions that have torn the country apart rather than try to bring it together.

It took the importuning of his Jewish daughter and son-in-law to craft a powerful statement of outrage at anti-Semitism after Saturday’s slaughter at a Pittsburgh synagogue. Then Trump went back into partisan mode, assailing his enemies. By the evening’s end he was tweeting about baseball, and on Sunday he went after another foe.

Trump’s mixed messages after the synagogue killings and the wave of bombs sent by one of his supporters to leading Democrats have thrust his leadership into the center of the national debate with about a week until fiercely contested congressional elections. Even some supporters call him tone-deaf, and critics say his fire-and-fury style has fueled a toxic moment in American history, while defenders bristle at what they consider opportunistic attacks by opponents interested only in tearing him down.

The deaths of 11 worshippers in Pittsburgh revived questions about what signals Trump has sent, intentionally or not, to the most radical fringe elements of society. As the president notes, members of his family are Jewish and he has been perhaps the staunchest supporter of Israel to sit in the Oval Office. Yet his castigation of “globalists,” seen by some as code for Jews, and his attacks on George Soros, the billionaire financier of liberal causes, have unsettled Jewish leaders.

“These words are like sparks to the gasoline of disturbed minds,” said Tom Malinowski, a former State Department official running as a Democrat for Congress in New Jersey. “These words can kill.”

Trump’s team rejected any linkage between his language and the acts of isolated extremists. “Everyone has their own style, and frankly, people on both sides of the aisle use strong language about our political differences,” Vice President Mike Pence told NBC News. “But I just don’t think you can connect it to acts or threats of violence.”

Trump’s discordant approach to national crises was apparent long before the past week. He equated white supremacists with counterprotesters after the violence in Charlottesville, Virginia, last year and engaged in a long war of words with the mayor of San Juan, Puerto Rico, when she asked for more help dealing with Hurricane Maria. His response to the brutal killing of Jamal Khashoggi, a Saudi journalist and U.S. resident, focused on his desire not to lose arms contracts with Saudi Arabia.

The president has made clear he does not see national harmony as his mission. He mocks the notion of being “presidential,” and the crowds at his rallies egg him on, eager for him to “tone it up” rather than “tone it down,” as he puts it. He reads the dutiful words of unity and grief and determination that aides put in front of him, but he refuses to stick to the script. His people want a fighter, in his view, and he plans to give it to them. If the mandarins of Washington and the cable channels tut-tut over his language, it is because they are out to get him. “He’s not an emotive president, he’s not an emotive leader,” said Ari Fleischer, a White House press secretary under President George W. Bush, who rallied the country in the days after the terrorist attacks of Sept. 11, 2001. “His style is completely different. It’s blustering and dogmatic.”

“Trump often sounds bad but he acts well, while President Obama always knew what to say but he didn’t do things well, he didn’t do things right,” Fleischer added. “He had soothing words and comforting nonthreatening language, and that didn’t improve our standing anywhere, including domestically.”

Inside the White House, advisers veer between resolve, resignation and resentment — struggling to get Trump to do and say what a typical president might, frustrated that he does not always heed their guidance and bitter that his critics are piling on. Sometimes they take it upon themselves to do what he will not.

Two White House officials, Jason Greenblatt and Avi Berkowitz, traveled to Pittsburgh on Saturday a few hours after the shooting, and were still there on Sunday. Urged on by his daughter Ivanka Trump and her husband, Jared Kushner, the president made plans to travel to Pittsburgh this week.

But he saw no reason to dispense with his campaign schedule or adjust his message. Within minutes of expressing outrage at anti-Semitism at a rally in Illinois on Saturday night, he attacked Rep. Maxine Waters, D-Calif., who had been targeted in last week’s spate of bomb scares. And he called out by name Bill Kristol, a prominent conservative commentator and Trump critic, who was once described by Breitbart News as a “renegade Jew.” By Sunday morning, Trump was attacking another opponent who had been sent a bomb, “Wacky Tom Steyer,” the liberal California billionaire leading a campaign to impeach the president. “He comes off as a crazed & stumbling lunatic who should be running out of money pretty soon,” Trump wrote on Twitter after seeing Steyer interviewed on CNN.

By end of the day, he was lashing out at the media again. “The Fake News is doing everything in their power to blame Republicans, Conservatives and me for the division and hatred that has been going on for so long in our Country,” he wrote. “Actually, it is their Fake & Dishonest reporting which is causing problems far greater than they understand!”

For his part, Kristol responded more in sorrow than in anger on Sunday. “We’ve been pretty lucky in our presidents,” he said. “They’ve tended to rise to difficult occasions. I wish there were any reason to hope our current president were either capable or inclined to do so.”

Trump’s relationship with Judaism has long been complicated. During his campaign in 2016, he reposted Twitter messages from a since-suspended account called @WhiteGenocideTM, which was said to be located in “Jewmerica.” He also retweeted an image of Hillary Clinton against a backdrop of dollar bills with the phrase “Most Corrupt Candidate Ever!” in a six-pointed star that some interpreted as a Star of David.

Kushner insisted that his father-in-law “is not anti-Semitic” but merely “careless in retweeting imagery that can be interpreted as offensive.” Kushner and Ivanka Trump have often joined the president in seeing criticism about his statements as partisan in nature.

The renewed scrutiny of Donald Trump’s rhetoric and his party’s position on guns could complicate the final week of the campaign for Republicans. Trump in recent weeks helped consolidate support for Republican candidates on the right, mainly in solid-red states where he is popular and opposition to gun control runs strong. But even before the weekend, he was largely banished from the most competitive campaigns for the House and various governorships because of his unpopularity with swing voters.

The gun issue is unlikely to hurt Republicans in most competitive Senate races, which are being fought over overwhelmingly rural territory. But there are close races for governor where Republicans have struggled to regain support from moderate white voters alienated by Trump and where Democrats are running on gun control, including crucial battlegrounds like Florida and Ohio.

Trump had already voiced frustration that the attempted bombings diverted attention from his closing message during the campaign. With Trump indicating he will not cancel his rallies, some in his party braced for a split-screen week that they feared could drive even more moderates away: the president hurling bolts at Democrats while funeral services are held in Pittsburgh.

“The events of the last week have rendered these rallies an even bigger double-edged sword,” said David Axelrod, the former senior adviser to Obama. “How do you call for unity in one breath and whip up the crowd into a state of rage about perceived enemies the next?” Republicans sometimes sound pained when asked about Trump at moments such as these. “I sometimes disagree with the way the president treats people,” Rep. Steve Stivers of Ohio, chairman of the National Republican Congressional Committee, said on “Meet the Press” on NBC on Sunday. “I thought after the pipe bombs he initially set the right tone of unity and coming together. And I hope that he will continue on that path.”

When the host, Chuck Todd, noted that the word “initially” made it sound as if he did not think the president had continued to set the right tone, Stivers said stiffly, “I said I hope he’ll continue on that path.”