For Trump, a first look at what presidential veneration could be 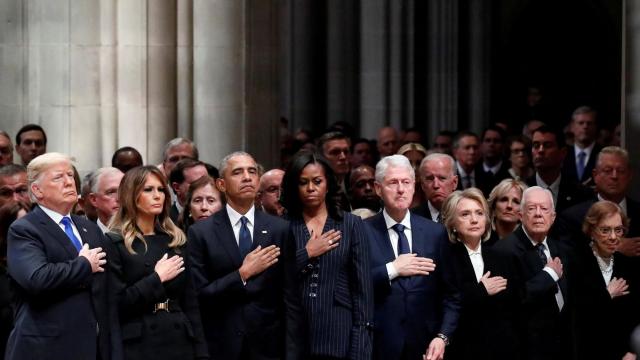 (CNN) — As he listened to military choirs and honor guards venerate George H.W. Bush on Wednesday, President Donald Trump found himself contemplating the vast scale of the job he holds --and wondering how his own legacy might compare.

In private this week, the current commander-in-chief has expressed amazement at the number of events designed to commemorate Bush, a one-term president who has been hailed as an even-handed bastion of civility.

Seeing the traditional rites of a state funeral up close impressed Trump, a president highly attuned to ceremony and pomp, according to people he spoke with afterward, and led him to consider how his own presidency will be remembered when the time comes.

"The memorial was a beautiful tribute to President Bush's extraordinary life and a noble legacy to public service," Trump said at a Hannukah reception Thursday in the East Room. "He was a wonderful man. We will always remember this great statesman and beloved American patriot. He really was very special."

Ahead of Wednesday's funeral, Trump had been anticipating an awkward encounter with the ex-presidents with whom he has not spoken since taking office, according to people familiar with the matter. His arrival into the sanctuary -- after all other guests had been seated -- disallowed any mingling with the Obamas, Clintons or Carters, though his vice president, Mike Pence, was seen in friendly conversation with the group before Trump walked in.

When he did arrive at his seat, Trump spent a moment removing his black overcoat and handing it to a military aide before sitting down and shaking President and Mrs. Obama's hands. He declined to reach further down the row to the Clintons or Carters, leaving the entire group to sit silently as the service got underway.

Watching coverage of the moment later, Trump shrugged off any perceived slights, suggesting there was no reason he should have extended his hand to Hillary Clinton, his old 2016 rival, or her husband, former President Bill Clinton.

After the ceremony, Trump departed well ahead of the other presidents, his motorcade pulling away from the National Cathedral as Bush's casket was still being carried back down the marble aisle. Though Wednesday was considered a national day of mourning, with federal employees given the day off, Trump walked straight into the Oval Office upon returning to the White House.

"It was a very brutal campaign," Wead said, suggesting the media portrayal of Bush as a "kinder, gentler" president compared to "philistine" Trump was inaccurate. "This is the modern presidency and to win it, whether you're George H.W. Bush or Donald Trump, you're going to have to learn how to win it by branding and by counter-punching," Wead said.

Trump later tweeted his approval: "Doug Wead, a truly great presidential historian, had a wonderful take on a very beautiful moment in history."

On Thursday the President had resumed his preoccupation with special counsel Robert Mueller's ongoing Russia investigation, which is expected this week to produce court filings that could shed light on its progress. In a tweet, Trump blamed the probe for tarnishing his presidential accomplishments -- the very ones he hopes will be among his lasting presidential legacy.

"Without the phony Russia Witch Hunt, and with all that we have accomplished in the last almost two years (Tax & Regulation Cuts, Judge's, Military, Vets, etc.) my approval rating would be at 75%," he wrote. "It's called Presidential Harassment!"

That's a rosy view of his approval rating, however, with most polls showing a figure about half that size.

Not since Trump's own inauguration nearly two years ago have the full trappings of the presidency been as elaborately displayed as this week, when uniformed military bands, 21-gun salutes and color guards were rolled out for one of his predecessors and not for him. Trump himself ordered the use of the presidential 747 aircraft, dubbed Special Air Mission 41, which transported Bush's casket from Houston to Washington and back again.

"The elegance & precision of the last two days have been remarkable!" he tweeted on Tuesday.

The pageantry of the job has always appealed to Trump, who was wowed by a military parade in Paris last year and ordered his own in Washington, only to later cancel it because of cost. He rarely misses an opportunity to employ "Hail to the Chief" as he enters a room, and has even embossed the presidential seal on his golf cart at the private clubs he owns.

As Washington paused to honor Bush, those symbols were everywhere, bracketing recollections of a decent and steady statesman -- a glimpse for Trump of how a traditional presidency can be remembered and celebrated once it has ended.

Like all recent presidents, Trump had preliminary meetings in the early days of his presidency about how he might want his own funeral to look. That's a precautionary practice undertaken by all White Houses in case something terrible happens while he's in office.

Even before he ran for president, Trump had selected a burial plot at his Bedminster, New Jersey, golf club. Most presidents are laid to rest at their presidential libraries, however, and it's not clear whether becoming president has changed Trump's plans.

In his funeral decision-making, Trump would have had an opportunity to select a grand state sendoff or something smaller. While some ex-presidents, including Ronald Reagan, chose an elaborate week-long mourning -- including a horse-drawn caisson followed by a riderless horse, its stirrups filled with Reagan's own boots -- Bush went for a more subdued state funeral.

Tradition holds that all ex-presidents are invited to these types of events, a practice Bush was intent on maintaining as he made plans for his own funeral. Trump was not invited to Barbara Bush's funeral in April, but afterward the Bush family reached out to the White House to inform Trump the state funeral for President Bush would be different.

In between the two Bushes' funerals was another highly-watched memorial -- for Sen. John McCain in September -- that amounted to an outright rebuke of Trump, who was not invited and played a round of golf instead. Trump spent that week seething that a political rival, one who had not served as president, was receiving the type of official veneration usually reserved for a commander in chief.

After McCain's death, Trump drew criticism for his muted response to the passing of a man he regularly mocked in public. This week has been different, however, with tensions between Trump and the Bush family put aside. Trump visited the Bushes for 23 minutes at Blair House on Tuesday, and first lady Melania Trump oversaw a delivery from the White House florist shop to the presidential guest house before the family arrived.

In the afternoon after Wednesday's funeral, the Trumps paused for a moment in front of Bush's portrait in the White House, currently draped in black fabric, to consider the event that had unfolded.