For This Stuffing, Brioche Beats Bagels 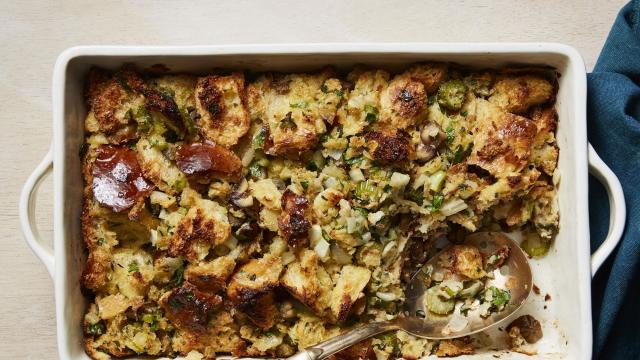 To me, bread is the soul of a good stuffing. The better the bread, the better the dish. So I buy rich, egg-yellow challah or brioche, letting them go stale so they can absorb the most flavor from vegetables and stock.

My mother considers this a waste. “I prefer eating my brioche with butter and jam,” she said. A frugal child of the Depression and World War II, she makes her stuffing out of scraps she has saved all year. Baguette heels, rye crusts, leftover bagels: All go into a plastic bag in the freezer.

We also disagree about chestnuts. I opt for roasted, peeled chestnuts in a jar, but my mother insists they be peeled fresh, a task that fell to my father. He’d do four at a time, scoring an “X” onto the glossy shells, microwaving them until the shells curled back, then yanking them off while the nuts were still warm. He’d listen to an opera to pass the time; when Don Giovanni descended into hell, I’d know the job was done.

Something my mother and I do agree on is the importance of good homemade stock. We make it with every leftover bone that comes through our kitchens. To season the broth, I save leek tops and parsley stems in a bag in the freezer; without any bread scraps in there, I’ve got plenty of room.

This stuffing is baked in a casserole dish so the surface gets crisp and brown. But you can use the mixture to stuff a turkey instead. Be sure to cook it until a meat thermometer inserted into the stuffing reads 165 degrees.

If the stuffing has not reached 165 degrees but the turkey has, remove the bird from the oven, scrape the stuffing into a baking pan, and continue to bake until it’s done.

To roast chestnuts, use a paring knife to cut an “X” in the shell of each nut, then roast in a 400-degree oven until the shells curl back at the cuts, about 15 to 20 minutes. Let cool until you can comfortably pick up the nuts, then peel off the shells. This becomes harder as the nuts cool, so work quickly. Or return the unpeeled nuts to the oven for a few minutes and try again.

Consider this a basic template for stuffing, and make it your own. You can substitute other breads for the brioche (cornbread, baguette, whole wheat) and other nuts or sautéed mushrooms for the chestnuts.

Dried fruit — like cranberries, figs or chopped apricots — is a nice addition here. If the fruit is hard or crystallized, let it soak in hot water for 15 minutes or so to soften before using.

8 tablespoons unsalted butter (1 stick), plus more for the pan

1. Arrange brioche pieces in a single layer on a rimmed baking sheet. Let them dry out overnight, or place them in a 200-degree oven for an hour or two. (They’ll be ready when they feel stale to the touch but haven’t taken on any color.)

2. Heat oven to 375 degrees, and butter a shallow, 2-quart casserole or gratin dish. On a pot on the stove or in the microwave, melt 4 tablespoons butter. Put bread in the prepared baking dish and toss with melted butter. Bake until golden and toasted, 8 to 10 minutes. Let cool, then transfer toast to a large bowl. (Don’t wash the baking dish; you’ll use it again for the stuffing.)

3. In a 12-inch skillet, melt remaining 4 tablespoons butter over medium heat. Stir in onion, celery, fennel and 1/2 teaspoon salt; cook until soft and just starting to brown, about 12 minutes. Stir in thyme and sage, and cook for 1 minute. Remove from heat and transfer to bowl with brioche. Gently fold in chestnuts and pepper and let cool.

4. In a medium bowl, whisk together 1 1/2 cups stock, eggs, parsley and remaining 1 teaspoon salt. Fold gently into bread mixture, then scrape it all back into prepared baking dish. Drizzle on remaining 1 cup stock until the mixture is moist but not squishy; you may not need all the stock.

5. Cover dish with foil and bake until lightly springy, about 25 minutes. Remove foil and continue to bake until golden brown, another 20 to 30 minutes.