For This Master Sculptor, the Medium Is Muscle 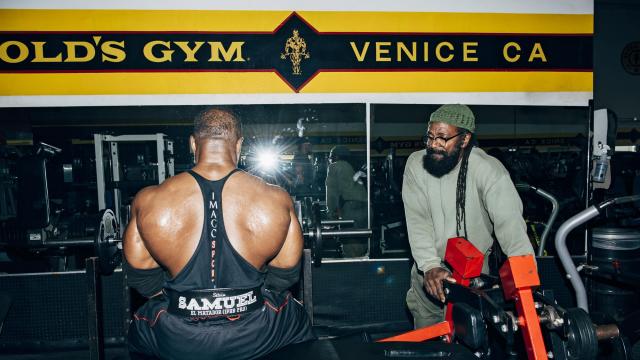 VENICE, Calif. — Remember the episode of “Seinfeld” that features Elaine trying to return a dress to Barneys after she takes it home and realizes that it doesn’t look nearly as good as it did when she was at the store, surrounded by mirrors that made her appear skinnier?

Well, it’s the opposite at Gold’s Gym in Venice, the longtime bodybuilding mecca frequented by Arnold Schwarzenegger and three subsequent generations of herculean he-men.

Here, lifters get stretched out horizontally not just by pushing heavy weights and ingesting supplements of varying legal statuses, but also through their own reflections on the walls.

And for those with a real interest in getting huge and $225 an hour to burn, one trainer stands at the front of the pack.

He is Charles Glass, a bespectacled, beanie-wearing and dreadlocked former bodybuilding champion who got his start competing in gymnastics at the University of California, Berkeley. He won the middleweight championship with the International Federation of Bodybuilding in 1983, before giving up the sport professionally to train others.

His celebrity clientele, as listed on his website, has included the actor and former wrestler Dwayne Johnson, aka The Rock; the four-time Arnold Classic champion Kenneth Wheeler, known as Flex; the 2008 Mr. Olympia winner, Dexter Jackson; and big-name athletes such as Magic Johnson, George Foreman and Jose Canseco.

YouTube and Instagram have turned Glass into something of a national fitness celebrity. And here at home, in this land of thick necks, turbo tans and tattoo parlors, he is a tourist attraction unto himself.

On a recent Friday afternoon, bodybuilding legends like Kai Greene, a three-time runner-up in the Mr. Olympia contest, ambled over with camera crews for impromptu interviews. People with day passes took selfies with Glass.

Glass moved to a private area with Lionel Brown, a 5-foot-8, 240-pound competitive bodybuilder, and watched him practice his stage poses.

“This is what we call classic shape, nice form,” Glass said, after instructing Brown to take off his shirt. “Show your abs. Do a double bicep. Squeeze your lats.”

“See the separation there?” Glass said. “That’s the difference between a professional and an amateur.”

Most bodybuilding trainers emphasize repetition with free weights and extreme poundage. Glass, who is in his 60s (“old,” he said), makes essential tweaks to that, emphasizing form over maximum overload and unapologetically using machines — often in strange new ways that take handlebar and seat placement as mere suggestions.

There is also an earthy gracefulness about him, from the inconspicuous dark green sweatshirt and matching green cargo pants he wears to the way he avoids barking clichés like “come on, baby” and “let’s go, cowboy” at his clients. (Among his favorites is an 80-something grandmother who works out with him nearly every day and is, he says, “one of the hardest working people in the gym.”)

For the most part, he comes off less like mayor of the mesomorphs than their Yoda-ish therapist. So this November, I went to Glass for a couple of workouts.

The first day, we did an intense pec workout in which he moved me around to a variety of chest press and fly machines. The weights we used were significantly lower than what I do on my own, but the workout was considerably more focused. And difficult.

Putting a rectangular block behind my back on the incline press pushed back my overdeveloped shoulders, forcing me to isolate my chest in ways I’d barely felt before.

The next day, we worked legs, where even the ordinary hamstring curl machine exercise was made exponentially harder by having me put my hands at the front of the pad and arching up slightly, as if I was doing a back extension.

Glass also had me do one of his signature exercises, a single leg press movement that is done by stepping into a horizontal leg press, turning the body to the side, and going one leg at a time with the other suspended in midair.

It was not only one of the most intense quad exercises I’d ever done, but also felt sort of like being forced to take a calculus test at the same time.

“Before we had a lot of machines, we all used free weights because that’s what we had,” Glass said. “But now, you can’t get certain angles from free weights than you can get machines. They put a different kind of stress on the muscles. I try to work around what I have.”

The way Glass tells it, he gave up his own bodybuilding career in the 1980s because of the toll it was taking on his body. “At my heaviest, I was 262 pounds,” he said. “I was taking health risks, and I didn’t want to do that. I couldn’t walk without breathing like a madman. I thought, ‘Do I really want to do this?’ And that’s when I realized I was done.”

He’s not about to voice blanket opposition to performance-enhancing drugs. “I’d be a hypocrite,” he said.

He acknowledges the role steroids play with bodybuilders competing at the highest levels. But he does want clients using them to start making choices that factor in their health, including going to a doctor regularly and getting blood work done.

As I worked out, a pair of lifters who are big enough to snap Chris Hemsworth like a twig screamed through dead lifts.

Glass was unimpressed. “A waste of energy,” was what he called their loud display.

In walked Glass’ next client, another person who is expanding his customer base.

“Calvin!” Glass said, walking off to great him.

It was Calvin Klein, who looked lithe and fit in his tight navy T-shirt and charcoal sweatpants.

“I’m committed to staying healthy and energized, and this is a great way of doing it,” Klein said.

Glass, he said, “is up there with the best.”