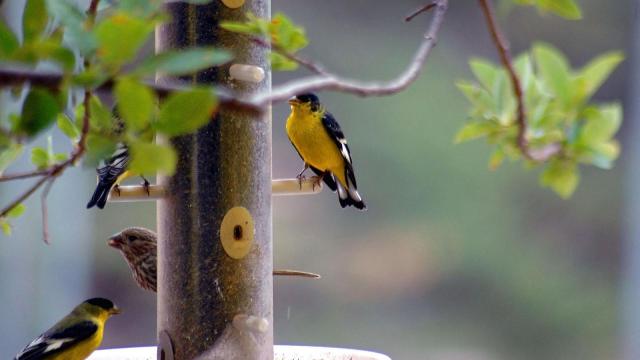 Like my father, and his father before him, I’m an early riser. With teenagers in the house, I love starting the day when the house is still quiet, but this summer, when I open the back door, it is anything but that. Even at 5 am, there’s already a cacophony of birds up and at work. Cardinals and robins are plucking the soil for worms. The starlings who have taken up residence in my attic are flitting to and fro with nesting materials. There are finch nests in my tea olives. I recently put up two plexiglass bird feeders on the windows by the kitchen and within a day, I had visitors. What a small thing that gives me so much pleasure when drinking my coffee every morning.

I recently read a story about Bill Thomas, a Harvard medical graduate who, at 31, took over running a nursing home. While there and at such a young age, Thomas identified the three plagues of all nursing homes: boredom, loneliness and helplessness. He wondered if caring for another being might change that.

He started asking questions like, “how about if we allow pets?”

“Against regulations,” someone told him.

In any case, perhaps partly because he was young and came in with fresh eyes, he challenged those regulations. He brought in 100 birds, four dogs, two cats, rabbits, gardens and a flock of laying hens. Guess what happened? A study found that, among other measures, the facility’s total drug costs became less than half that of a comparison facility, and deaths fell by 15 percent.

Dr Gawande, in his book Being Mortal, wrote, “The most important finding of [the] experiment wasn’t that having a reason to live could reduce death rates for the disabled elderly… [it] was that it is possible to provide them with a reason to live, period.”

I had this in the back of my head when I recently purchased two large boxes of the same plexiglass bird feeder I had put up in my kitchen and made visits to many of my dear clients living in Assisted Living.

This past week, when I revisited them, one told me said, “They [the birds] discovered it in just three days.”

Another said, “I love birds. That’s the best gift.”

A former physician in his nineties and blind still wanted me to put one up. He asked me to describe the birds that were feeding on his during my last visit. “Purple finches,” I said. “What is your favorite bird?”

He had spent most of his life in New England and said, “I think the thrush, because it was so rare to see them--though I’ve enjoyed the blue birds on my daughter's porch, too.”

We can’t prevent people from aging and the inevitable losses that come with it, but maybe we can at least, with Bill Thomas' experiment in mind, find creative antidotes to bring more life into our loved one's last days.