For One Far-Right Politician, Forgetting Germany’s Past Just Got Harder 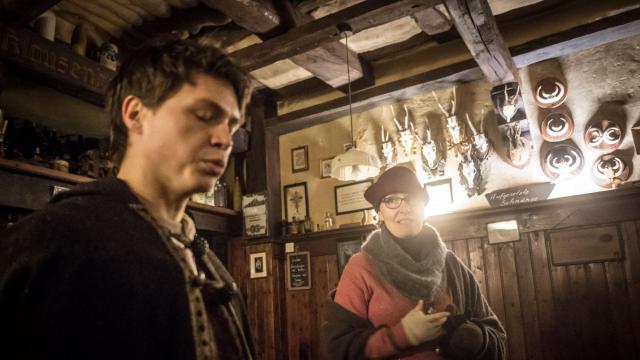 BORNHAGEN, Germany — No one in the village saw it coming, least of all Björn Höcke, a quiet and well-liked local father of four who also happens to be Germany’s most notorious far-right politician.

Last January, at a rally in Dresden, Höcke questioned the guiding precept of modern Germany — the country’s culpability in World War II and the Holocaust — calling on Germans to make a “180 degree” turn in the way they viewed their history.

Germans were “the only people in the world to plant a monument of shame in the heart of their capital,” he said, referring to the Holocaust memorial in Berlin.

And then, one recent Wednesday morning, Höcke woke up in his rural home to find the Holocaust memorial outside his bedroom window: 24 rectangular concrete slabs, one section of the original monument, rebuilt to scale on the property immediately neighboring his.

The only difference: The slabs had been rotated 180 degrees.

“We wanted to remind Mr. Höcke that he can turn German history however much he likes, it doesn’t change,” said Philipp Ruch, co-founder of a Berlin-based artist collective known as the Center for Political Beauty and, at least on paper, Höcke’s new neighbor.

The memorial has put an uncomfortable national spotlight on Bornhagen, a village of 309 inhabitants on the former border of East and West Germany in the fabled rolling hills of Thuringia, where the Brothers Grimm long ago collected fairy tales.

Höcke, a history teacher turned local chief of the Alternative for Germany, or AfD, has called the village his “refuge” and “locus of inspiration.” But behind its idyllic facade, Bornhagen reflects the new, confusing reality of a Germany where polite political consensus and demographic homogeneity are breaking down, and where the intimate and ideological live side by side.

The far-right AfD won 34 percent of the vote in Bornhagen during the most recent elections, more than twice the national average. But neighbors are neighbors. Supporters of the left-leaning Greens go hunting with AfD voters here. Recent refugees live peacefully in the village, too.

Until the memorial appeared overnight on Nov. 22, these contradictions had coexisted peacefully — at least on the surface. But the art installation has upset village life. For many, it has forced a conversation they would have preferred to avoid.

“We don’t talk about politics,” said a friend of Höcke’s wife, who like many villagers did not want her name used.

But Höcke’s remarks, which had shocked even some in his own party though it decided not to expel him, have made that mind-your-own-business custom harder to abide for some. And they have raised a challenging question that goes far beyond this village: How should Germans deal with the rise of the far-right, now that an openly nationalist party has entered Parliament for the first time since World War II?

For Ruch and his fellow artists, the answer is clear: People like Höcke deserve “not one millimeter.”

“He broke the mother of all taboos, he challenged the founding narrative of modern Germany and he got away with it,” said Ruch, who was born in Dresden and now lives in Berlin.

“We learn from our past so it does not happen again,” he added. “That is who we are. That is our strength.”

For 10 months, the artists discreetly scouted out the village. They registered a business to get local license plates, rented the property next to Höcke’s house, and erected a tent in the garden to put together the replica memorial while shielded from view. Neighbors were told the tent was hiding a surprise for an engagement party.

“Aggressive humanists,” the artists call themselves. “Terrorists,” Höcke calls them. He has tried to have them evicted, so far to no avail: Their rental contract runs until 2022.

In recent weeks, school classes came to visit the memorial, far-right opponents slashed the tires of cars parked outside the site, and far-left supporters held an anti-fascist march. Death threats have been traded. Police cars now patrol the normally sleepy streets at all hours.

Already, the local butcher says sales of his prize-winning sausages are down. Wedding reservations in the village castle have been put on hold. The only hotel worries about cancellations.

Overnight, said Silvia Rinke, who has voted for the left-leaning Greens all her life, “we have become the Nazi village.” Rinke, who offers guided tours in medieval garb, says tourists are asking less about the region’s rich history, and more about Höcke. “It’s almost embarrassing to say you live here,” she said.

Bornhagen knows about German history. Its castle is 1,000 years old. Goethe and Bismarck are said to have come through the town. When Rinke moved to the village in 1993, the old East-West border fence ran through what is now her backyard.

She is appalled by Höcke’s comments. But she is also appalled by some of the artists’ methods.

Filming the Höcke family home, for example, or rifling through their trash to get a DNA sample in order to determine Höcke’s own racial purity. (It turns out he has Polish and Portuguese blood.)

This month, villagers found a letter in their mailboxes offering 5,000 euros ($5,900) to anyone willing to provide a witness statement that Höcke has written under a pseudonym for a newsletter associated with a convicted neo-Nazi who lives two villages away.

All of that revives memories of a time most people in a village on the border of the former East Germany would rather forget. “I am anti-AfD, but even I feel like I had to become pro-Höcke,” said Rinke, for whom privacy is a red line.

Ruch insists that the “surveillance” of Höcke’s home was mostly for show. “We are not the state, we are not the Stasi,” Ruch said, referring to the East German secret police. “The state probably should monitor a known Nazi, but it does not.”

He has not visited the memorial and will not comment on it directly — except to say: “Bornhagen is not Höcke.”

The village has always integrated foreigners, Apel said. The same barracks that once hosted the border guards of communist Germany now host 80 asylum seekers from countries like Afghanistan, Iran and Iraq. Three refugees work in the local inn. “There has never been trouble,” Apel said.

Rexhino Metushi, who came to Bornhagen from Albania in 2015 and is doing an apprenticeship as a cook, confirmed this. “I know everybody here and everybody knows me,” Metushi, 18, said in fluent German. The innkeeper, Martin Röhrig, is helping him to get work visas for his parents.

Röhrig is no fan of the AfD. When Höcke approached him once to sign a petition, he politely declined. But he knows that several of his clients have embraced the party.

“I don’t think that all the people who vote for the AfD are Nazis,” said Röhrig, 34. Many, he said, simply feel abandoned by mainstream parties that “can’t even form a government.”

Rinke visited the miniature memorial for the first time last week. She did not stay long. One of her friends lives next door. Her 8-year-old’s room overlooks the site.

Children are asking “why people are being mean to Mr. Höcke,” Rinke said. Her son goes to school with his children. “How do you even begin to explain this?”

But that, said Susanne Prinz, a 30-year-old farmer from a neighboring village and one of the volunteers who show the site to visitors, is the point of the memorial: to force people to take a stance.

“You can’t just look the other way; that is one lesson we learned from history,” she said. “When children ask questions, you have to explain.”