For Many Public Housing Residents, It’s Cold Inside, Too 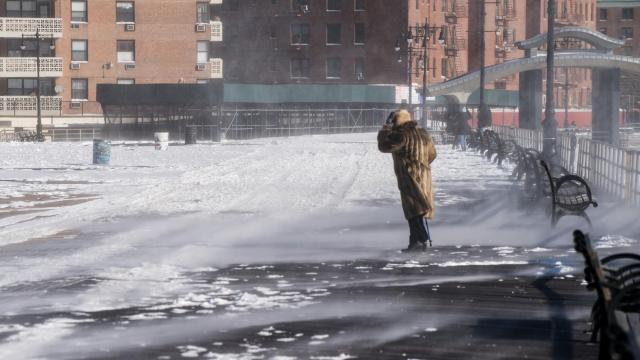 NEW YORK — The oven was on in Patricia Elcock’s apartment on the Lower East Side of Manhattan because the radiators were cold — and a window in her 10-year-old grandson’s room would not close all the way. They had taped clear plastic over it, hoping the room would feel less drafty.

“It’s cold, it’s cold, it’s cold,” said Elcock, 59, a security guard who has lived in the building at 99-103 Avenue C for about 13 years. Other residents echoed her complaints about the heat — off more than on lately, because the boilers seem to be in perpetual disrepair — and about the slow response from the New York City Housing Authority, which runs the building.

In the bone-chilling wake of a wind-propelled snowstorm, the city said that heating systems had failed in dozens of buildings operated by the agency and that repair crews were scrambling. Some 15,000 people, about one of every 11 living in agency buildings, did not have heat at some point during the storm.

But many residents said that for days before that, the heat in their buildings had been intermittent at best.

On Friday, the agency said the heat had largely been restored. Only 18 buildings, with 459 apartments and 1,011 residents, had heat or hot water problems, the agency said, and Mayor Bill de Blasio said agency workers had been doing the best they could in trying circumstances.

“As the problems have been occurring,” the mayor said on WNYC radio, “we’ve been getting the heat back on in each development.” But he added that there were still “a few, for sure” where “we have more work to do.”

Across the city on Friday, the plows and blowers were revving. Underfoot was soft, powdery snow — 9.8 inches in Central Park, which broke a 30-year-old snow record for the date and was compounded by just over three-quarters of an inch of rain, according to the National Weather Service. The snowfall totaled 7.4 inches at La Guardia Airport and 8.4 inches at Newark Liberty International Airport, also records, and 8 inches at Kennedy International Airport.

Friday dawned clear and sunny, but the Weather Service forecast more cold for the weekend, with wind chills plunging to 10 to 15 degrees below zero in New York City on Friday night.

Jasmine Blake, a spokeswoman for the housing agency, said the problems with heat dated to last weekend, when cold temperatures settled in and additional employees were assigned to round-the-clock duty. The snowstorm complicated repair efforts that were already underway, including, she said, in 32 buildings “where we know we have the most chronic issues.” From 6 a.m. to midnight in those places, she said, someone was assigned to do “constant monitoring” for problems with heat.

The agency said that on average, heat was restored within five hours of a breakdown.

The city’s public advocate, Letitia James, said in an interview that her office had received calls about the lack of heat from public housing developments across the city. She said the problems affected vulnerable residents, as in the case of a family at Drew Hamilton Houses in Harlem dealing with no heat and a baby with a fever of 101 degrees.

“We need the boilers replaced, period,” James said, adding that reductions in federal money for public housing had begun long ago. “At the end of the day, Washington is not coming in on a white horse,” she said. “The city and state has to show them by being responsible.”

So for many public-housing residents, it was a long, cold week.

Arlynné Whittingham said she went to the Home Depot around the corner from her apartment in a city-run housing complex in Woodside, Queens, but her neighbors had beaten her there. The space heaters were sold out.

Whittingham, 57, wanted one because her apartment was cold after two of the six boilers in the complex broke down. She turned the oven on, and that was not all.

“I had to get completely dressed to go to bed,” she said. “It felt like the outdoors in here.”

Victor Bach, a senior housing policy analyst for the Community Service Society of New York, said the housing agency had issued alerts — the agency said it calls residents in a building when it receives a report of a heat problem, and again when the problem is fixed. Bach also said the agency has a telephone number widely referred to as a hotline that residents could call. “It didn’t in the past,” he said.

“I think NYCHA learned some lessons from Superstorm Sandy, when things really went bottom up, in terms of trying to do their best to keep in touch with residents who are at risk,” he said.

But he said the problems persisted.

“Any tenant without heat is unacceptable in this kind of weather,” he said. “We’re talking about an aging infrastructure in NYCHA buildings in which many boilers have outlined their useful lives and get easily strained when the winter weather gets severe.”

The mayor said that one housing agency building was coping with a boiler installed in 1954 and that others had heating plants from the 1960s. Blake, the spokeswoman for the housing authority, said the cost of replacing “our most critical boilers” was $2 billion.

For the homeless, the cold was an even more daunting problem. Many had accepted the offer of outreach workers to go into shelters, but some decided to ride it out alone. Homeless people in Pennsylvania Station said they would take refuge from the elements in the transit hub butcould not sleep there. “They move you along,” said Sasha Purandaye, referring to the police. “Train. I sleep on the E train.”

Many others in Penn Station echoed that idea, noting that the E line runs underground for its entire length, so E trains tend to be warmer than others.