For George Bush and His Eldest Son, a Relationship Unique Among American Presidents 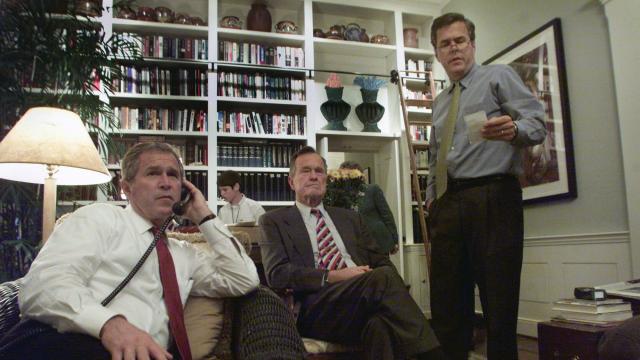 WASHINGTON — Theirs was a relationship of Shakespearean dimensions, father and son occupants of the Oval Office. A son who grew up struggling to live up to the example of the great man. A father who watched his eldest boy eventually take his place in the seat of power, his love unquestioned but his advice unwelcome.

They always insisted that talk of tension was overblown, that those who tried to analyze their interactions for fracture points or Oedipal motives were engaged in “psychobabble.” But one way or the other, in the last years of the father’s life, according to people close to the family, George Bush and George W. Bush were, at last, at peace with each other.

When the son gives the eulogy for the father Wednesday at Washington National Cathedral, it will bring to a close an extraordinary relationship unlike any in the annals of the U.S. presidency. At once caring and competitive, fraught with the weight of history and resistant to scrutiny, their bond was unbreakable despite a lifetime of stress that would carry implications not just for the family, but for the nation and the world.

By the time George W. Bush left office in 2009, the 41st and 43rd presidents could finally put the burdens of public life behind them and focus on the things that parents and children focus on when the parents grows older. They relaxed with each other in Texas and Maine unaccompanied by a military aide with the nuclear codes. They shared the joy of family weddings and births, and fretted over health problems. They talked about funeral plans.

“Let’s face it,” he added, “43 being president was difficult for both of them in some respects. And while neither of them put undue burden on the other, there were still underlying tensions given the nature of the situation. I think it was much easier in the post-presidential years.”

In a way, the two were finally at perfect parity, both former presidents in retirement. “It returned to the relationship they had when neither one of them was president but now they had had the shared experience of both having been there,” said Karl Rove, the first employee of the elder Bush’s earliest presidential committee and later the architect of the younger Bush’s campaigns. In their mutual post-presidency, George W. Bush seemed intent on making sure his father knew that he truly did admire him. A fledgling painter, he produced a portrait capturing his father’s spirit. A fledgling author, he wrote an almost-worshipful book about his father that he rushed into print so that it would be published before the elder Bush died.

The very fact that the two agreed to cooperate with Updegrove for his book underscored the shifting dynamic. After years of resisting putting their relationship on public display, they seemed ready to try to define it for history on their own terms, dispensing with the speculation that constantly irritated them.

Growing up the eldest son of George Herbert Walker Bush had its benefits and challenges. George H.W. Bush was a star college baseball player, a war hero and a successful businessman before entering politics. George W. Bush always said that what he got from his father was “unconditional love,” but he also got a tough act to follow. He sought to follow the same path, enrolling in some of the same schools, but struggled with alcohol and a wild streak.

The subtle tension between father and son finally erupted around Christmas 1972 when George W. Bush took his 16-year-old brother, Marvin, out drinking. Driving home, he smashed into a neighbor’s trash can and noisily dragged it down the block. His father summoned his eldest son to the study.

“I hear you’re looking for me,” the inebriated young man snapped. “You want to go mano a mano right here?”

It was not until George W. Bush quit drinking cold turkey after his 40th birthday that his life began turning around. He eventually brokered the sale of the Texas Rangers and made himself the public face of the team as a managing partner. That led to a successful campaign for governor, which ultimately led to a White House run of his own.

George W. Bush seemed intent on avoiding what he perceived as his father’s mistakes. Not only would he not raise taxes as the first Bush did, he would cut them. He would cultivate the conservative base even as he touted the family’s famed compassion. And most famously, he would send U.S. troops to Iraq to topple Saddam Hussein, whom his father had left in power after the Persian Gulf war of 1991. Many wondered at the time about his true motivation. “This is a guy that tried to kill my dad at one time,” the son said of Saddam at one point.

But people close to George W. Bush have long argued that it was far too simplistic to suggest the invasion was just trying to finish what his father started and that the Sept. 11, 2001, attacks were dramatic proof of the dangers of leaving threats like Saddam in place, even though he was not involved.

The 43rd president made clear that while he appreciated his father’s love and support, he did not necessarily lean on him for advice. His father, he explained, was no longer briefed the way he had been as president and therefore was not as informed. When journalist Bob Woodward asked about his father’s counsel, the son said, “There is a higher father that I appeal to.”

But it did not go unnoticed when the elder Bush’s national security adviser, Brent Scowcroft, wrote a newspaper column arguing against the Iraq invasion. The younger Bush was livid, knowing the piece would be seen as a message from his father, and he railed at his staff. He called his father, who tried to calm him down. “Son, Brent is a friend,” he said.

Dan Bartlett, who served the younger Bush as a White House counselor, said episodes like the Scowcroft flap did not last. “All that quickly fades,” he said. “It just really does. None of that had any real residue in what I saw, and there wasn’t much talk about it in the years after.”

Still, George W. Bush later included in his memoir a letter his father sent him at the time of the invasion supporting his decision, as if to prove to doubters. But his father, while never publicly questioning his son’s decision, later told his biographer, Jon Meacham, that he believed Vice President Dick Cheney and Defense Secretary Donald H. Rumsfeld had too much influence and served his son badly.

Even so, Rove and Bartlett, among others, said too much was made of such things. Bartlett recalled watching the first Bush sweating his son’s re-election drive as if it were his own, though his victory meant the son had succeeded where the one-term father had failed. “You’d be hard-pressed to find anybody who saw any evidence of strain during” the second presidency. “There’s just too much respect, too much reverence.” Jonathan Bush, the brother of the elder Bush, said his brother respected the younger Bush’s prerogatives as president. “When George W. was president, he was the perfect counselor because he would never give his advice. He would just listen,” Jonathan Bush said in an interview. “They were very close when he was president.”

In the end, the elder Bush’s final decline at his home in Houston came quickly last Friday night, too quickly for the son to make it from his home in Dallas. And so a speakerphone connected them one last time.

The son told the dying father that he was a “wonderful dad” and that he loved him.

“I love you, too,” the father replied in what were reported to be his last words.