For Five Harvard Freshmen, a Personal Examination of How They Got In 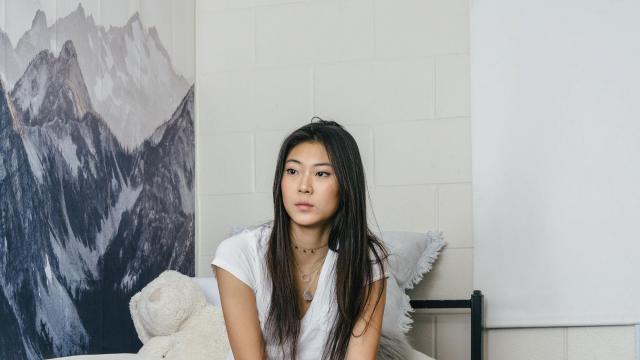 CAMBRIDGE, Mass. — Two freshman friends sat across from each other in a common room, comparing notes on how exactly they got into Harvard. In some ways, their situations were opposites: One was a “double legacy,” with two parents who had received Harvard degrees. The other was the son of a police officer and on full financial aid.

The legacy student, Iman Lavery, remembered feeling self-conscious during a conversation when she first arrived at school: A classmate had contrasted people who were “super qualified to be here” with legacies. For her friend on financial aid, Joseph Felkers, it had been the frequent questions from new acquaintances of “What’s your thing?” — how did you get in? — that set him on edge, making him wonder if his “thing” was his passion for poetry or simply that he was poor.

For many freshmen at Harvard who have started school as a lawsuit challenging the university’s use of affirmative action in admissions plays out in court, the case has been personal. It has sharpened the usual freshman-year doubts about how they ended up among the less than 5 percent of applicants chosen from a pool of 42,749. And it has forced uncomfortable questions about which circumstances beyond their control — like race, wealth or legacy status — got them or their classmates here.

Lavery and Felkers said that the case was not talked about much among freshmen, although they said they had discussed it here and there, at dinner or between classes. Felkers described it as “kind of an elephant in the room.”

But late on a recent weeknight, the two sat down with Lavery’s three roommates — Nadine Lee, Lauren Marshall and Charlotte Ruhl — to talk about the case and how it had made them reflect on their admission to Harvard and their experience.

The room was decorated with botanical prints and a poster of a landscape by the Japanese artist Hiroshige. Felkers, who wore wire-rimmed glasses and his hair in an undercut, perched on a white couch next to Marshall and Ruhl, who tucked their socked feet under them. Lavery and Lee, both in leggings and sneakers, sat across from them on a chair and a storage bench. As they talked, the students, all 18 years old, passed around a package of Double Stuf Oreos that Ruhl’s mother had sent.

The plaintiffs in the case have accused Harvard of discriminating against Asian-Americans by holding them to a higher standard than any other racial group. Defending itself, Harvard has been forced to reveal aspects of its admissions process that it kept closely held in the past, and some, like the special treatment given to students whose relatives made major gifts to the university, have been jarring.

Two of Lavery’s roommates — Lee, who is Korean-American, and Marshall, who has a Chinese mother and a British father — said they thought that Harvard’s admissions process was biased against Asian-Americans.

Lee — who grew up in Englewood, New Jersey; Seoul, South Korea; and Marin County, California — said she had long assumed that she would face discrimination in applying to college, partly because she had watched Asian friends with excellent grades and scores be rejected by their desired schools. She said she had thought a lot about how to stand out from other Asian-American applicants. Ultimately, she applied to join the U.S. Air Force Reserve Officers Training Corps. In her applications, she emphasized her enthusiasm for the military and her ambition to be a trauma surgeon.

“I knew that I didn’t — whatever this means — I didn’t want to be the typical Asian,” she said.

Marshall, who wore dark eyeliner and had a swirl of bleached hair, is an accomplished composer from just north of London. She said she had not felt as if she was competing against other students of Asian backgrounds to get into Harvard because her strengths were creative rather than strictly academic. Had her talents been in STEM — shorthand for science, technology, engineering and math — she would have felt differently, she said.

“If my grades were amazing and that was my hook — the fact that I’m an accomplished, like, STEM-field scientist or whatever,” she said, “I would feel a little bit — maybe I wouldn’t have ticked the Asian box” on the application.

She said that what she had read about the lawsuit, particularly that Asian-American applicants were rated lower on personality traits than applicants of other backgrounds, made her suspect that some admissions officers were probably prejudiced against Asian-Americans.

“That’s just racist,” she said of the so-called personal ratings. (Harvard’s dean of admissions and financial aid, William Fitzsimmons, suggested in testimony in court that high school teachers and guidance counselors were partly to blame, saying that recommendations for white students were stronger than those for Asian-American students.)

Still, while Marshall wanted Harvard to address the issue, she said she also opposed the plaintiffs’ effort to end affirmative action in the school’s admissions.

The lawsuit directly accuses Harvard of discriminating against Asian-Americans, but it also has shed light on an array of advantages for some applicants: legacies, for instance — who are admitted at five times the rate of nonlegacy students — recruited athletes and those whose relatives have made major donations.

From reading online forums in which students compared their application profiles and discussed one another’s chance of getting in to different schools, Felkers had gleaned that his potential “hooks,” or advantages, were that he was from the Midwest and that his parents were low-income.

Felkers, who is from Caledonia outside Grand Rapids, Michigan, said that he was grateful for any boost to his chances but that he also felt ashamed. He said that after he was admitted to Harvard, he heard that an acquaintance from a rival high school, who had been rejected from some elite colleges, had told a mutual friend, “'Oh, Joseph got in because he’s on free and reduced lunch.'”

“It’s like a punch to the stomach,” Felkers said. “Of course it’s going to make you feel insecure.”

At Harvard, he said, his family’s poverty was often on his mind, especially when topics came up like what people’s parents did for a living or where they went to college. He said he frequently found himself debating how much to reveal.

“In a situation like this — we’re all just sitting around eating Oreos — I’m comfortable talking about my aid status,” he said.

“But if I’m, you know, on a Friday night, trying to get into a party thrown by, like, the heavyweight rowers, I’m not going to say, ‘Oh, by the way, I’m on full aid.'”

For Lavery, who is from Seattle, the discomfort had lingered since the conversation — during an August pre-orientation program — in which a classmate had casually suggested that most legacies were not qualified to be at Harvard. After that, she said, she spent a lot of time thinking about whether to reveal that she was a legacy to the friends she was making in the program, some of whom came from low-income backgrounds.

“At the same time, I almost feel guilty saying that,” she quickly added, “because being a legacy affords me a privilege.”

Lavery’s maternal grandmother immigrated from Mexico and her maternal grandfather from India, so she checked three boxes on her application, indicating that she was Hispanic, white and Asian. She said she knew that her racial and ethnic background could have played a role in her admission, as well.

“A lot of my thinking after I got in,” she said, “was like, ‘OK, well, I know that these were factors, but I know that I’m qualified to go to this school,’ and so it’s kind of a balancing act.”

Ruhl, who is white and graduated from Stuyvesant High School in New York City — where efforts to diversify the student body have left some Asian-Americans fearing that they will be excluded — was the one student in the room who said she had no idea what it was about her that had won her admission.

Earlier in the week, she had put in a request to see her own admissions file. Harvard has officially permitted students to see their admissions files since 2015, after a group of Stanford students successfully used a federal education law to gain access to their records. A Harvard spokeswoman said that the university had received roughly 200 such requests per month this fall.

In a moment when many people here are examining what has won some people admission over others, the chance to see one’s own file — complete with notes from admissions officers — can be tantalizing, although some students have said that they found the records cryptic.

Ruhl said she was simply curious. “This whole admissions process is such a mystery,” she said. Lavery said she had requested to see her file, too.

“This is news to me!” Felkers said, about his friends requesting their files. He said that he had thought about requesting access to his file but had not. And he did not think he would now.

“If I could be guaranteed that, once I opened it, it was going to say things that I wanted it to say, that would make me feel good and wholesome and fulfilled, I would,” he said. “But the chance that it doesn’t outweighs the benefits.”