For Fiddler Crabs, ‘Size Does Matter’ 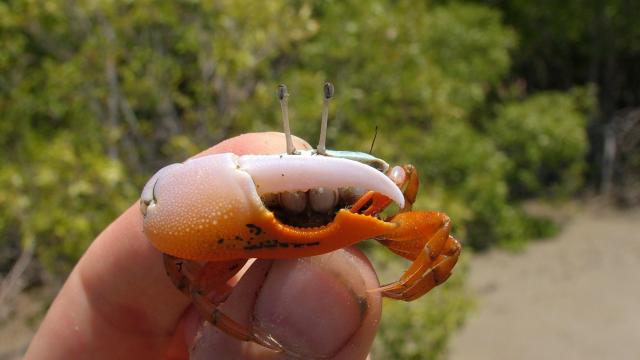 Male fiddler crabs are lopsided, with one claw that seems about the right size and one very large claw. As you might expect, one function of the larger claw is to attract females. The males drum with it and wave it when they see a female among them.

The wave means: Come hither, and I will dig a burrow for us and our eggs, and we will populate the mud flats with fiddler crabs uncountable.

Females prefer larger claws, as you might expect from looking at the males, and they have a thing for really fast wavers.

Sophie L. Mowles of Anglia Ruskin University in Cambridge, England, and her colleagues ran some tests with a robot claw to learn whether females noticed when males sped up their claw waving. As the team reported in Biology Letters, females preferred males who picked up the pace.

The conversation with Mowles was edited for length and clarity.

A: They live in burrows, and you only see them at low tide. At high tide, they go back into the burrow and they seal it up. They feed on mud flats by sifting the sediment through their mouth parts and eating microorganisms.

The female has two little claws — two normal-size claws for her — which she uses to help that feeding, to help pass the sediment up to her mouth. The male has one that it uses for feeding. And the other is huge. It’s greatly enlarged, to the point that it can be approximately half of his body weight. It’s often really brightly colored as well.

Now, what the males do is that they wave this claw in a species-specific pattern. So each species of fiddler crab has its own kind of wave, and they do this to maintain a territory, but also to attract a female.

Q: What do females like in a male crab?

A: Size does matter. The females like larger claws. They likely indicate a male that’s big. He can offer her a big burrow, because she goes into that to incubate her eggs. Also, crustaceans continue to grow for their majority of their lives, so a bigger male is older, which means that he’s a survivor so he’d be a good one to mate with. He’s probably got good genes for survival.

Q: And they prefer fast claw-waving?

A: They like males that wave and drum more rapidly. And what we showed in an experiment published in 2017 was that these vigorous displays demand much energy and deplete a male’s stamina. But despite this, males that wave rapidly or drum rapidly actually have greater stamina.

We tested this by making them run in a sprint track after a bout of these vigorous displays. Males that had signaled more vigorously were speedier in the sprint trials.

What we actually found was that they did, indeed, prefer the escalating males over the ones that were slowing down. So they do pay attention to those changes in rate.

Q: Were the females terribly disappointed when they realized they had been tricked?

A: Once they got to the robot, they would touch the base plate of it and realize there’s something wrong — it’s not real. They would usually at that point stop moving or run away.

Some of them actually responded as if he were a real male crab, which is by tickling him. What the females do is go up to the male and use their legs on one side of their body to tickle him. This communicates to him that she’s interested in him as a mate, and she’s not just trying to steal his home.

Q: Is there more to find out about fiddler crab mating?

A: The fiddler crabs are like little invertebrate peacocks. Why is so much going on there? Why has he got the huge tail with all the colors, why does he have to do a dance?

The same is true with the fiddler crabs and many, many other animals throughout the animal kingdom that perform either complex or even quite simple courtship displays, like our waving claw. It’d be really interesting to tease apart which bits exactly are important to females.