For Ex-Trump Strategist, Senate Race in Alabama Is a Thorny Battleground 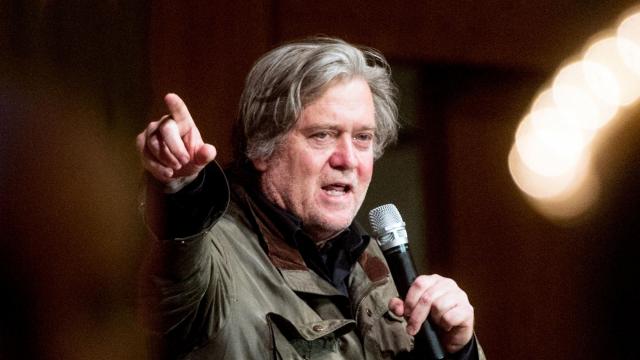 AIRHOPE, Ala. — Four months ago, Stephen Bannon was plotting a takeover of Washington and the Republican Party from his office in the West Wing as chief strategist to President Donald Trump.

On Tuesday, Bannon the private citizen stood where his latest fight had taken him: the mulch floor of a barn in southern Alabama, where he delivered a passionate plea to elect Roy S. Moore, the former judge who faces numerous accusations that he preyed on young women, some of them teenagers.

Railing against Republican leaders in Washington, the mainstream media and Moore’s many critics inside his own party, Bannon told the crowd of several hundred who had crammed into the barn: “They want to destroy Judge Moore. And you know why? They want to take away your voice.”

When Moore took to the stage, where an American flag the size of a billboard served as the backdrop, he worked his way through a speech that touched on everything from Common Core, to the value of military service, to bathrooms for transgender people. “They don’t want me up there. I know that,” Moore said softly, referring to his would-be colleagues in the Senate. “They don’t want somebody up there with an independent mind.”

It was not quite the fight Bannon envisioned leading. But it will have to do.

The stakes for Moore, the Republican Senate nominee who next Tuesday faces off against the Democrat Doug Jones, are indeed high. The race has become a closely watched referendum on the Republican Party leadership in Washington, the credibility of the national news media and the country’s tolerance for political scandal.

But the only person who may have more on the line than Moore is Bannon, who is risking his own campaign to topple Sen. Mitch McConnell, R-Ky., the Republican leader, as well as other incumbent Republican senators across the country.

Bannon, who never publicly questioned Moore after the allegations surfaced last month, saw a fortuitous turn of events before the rally here. McConnell, who had urged Moore to get out of the race after The Washington Post reported that a woman had accused the former judge of touching her sexually when she was 14, softened his insistence over the weekend and said he was “going to let the people of Alabama make the call.”

Then Monday came an endorsement from Trump. The president, who had stayed away from explicitly encouraging Alabamians to vote for Moore, although he did cast doubt on the veracity of his accusers’ claims, called Moore to offer his encouragement and said on Twitter: “We need his vote on stopping crime, illegal immigration, Border Wall, Military, Pro Life, V.A., Judges 2nd Amendment and more.”

Less than 12 hours later, the Republican National Committee reversed course and said it was reinstating the support it had pulled from Moore, lending his struggling campaign a crucial lifeline of manpower and financial support as the race enters its final week. (BEGIN OPTIONAL TRIM.) The Republican Party now finds itself in a situation remarkably similar to the one it was in last year with Trump: grudging acceptance of a nominee facing repeated allegations of inappropriate conduct with women because the conservative electorate shows no inclinations of walking away.

During the rally, Bannon tore into Mitt Romney, the 2012 Republican presidential nominee who this week declared Moore “a stain” on the party and the nation, and accused him of using his faith as an excuse for getting out of service in Vietnam. “You hid behind your religion,” Bannon thundered. “Do not talk to me about honor and integrity.”

(END OPTIONAL TRIM.) Bannon has been building a larger footprint for himself and the website he leads, Breitbart News, which seemed to have as many people working the rally in Fairhope as the Moore campaign itself. Breitbart streamed the event on its website and its Facebook Live account and hosted three hours of programming from the venue on Sirius XM’s Patriot Channel.

Bannon added another media outlet to his broadening portfolio Tuesday when he began hosting his old Sirius XM show, which he plans to return to more regularly now as he steps up his attacks on McConnell.

Matt Boyle, the Washington political editor for Breitbart, who was at the rally, said that the Moore story was tailor-made for the hard-right website. “We believe that this story really captures the war that we’re seeing between the deplorables, the voters of the Republican Party, and the establishment,” he said, using Hillary Clinton’s infamous insult of Trump supporters.

All signs, including the most recent polling, have pointed to a race that could swing either way.

Jones, in a speech streamed on his Facebook page Tuesday, made an uncharacteristically strong denunciation of Moore, accusing him of humiliating Alabama. “Roy Moore has never, ever served our state with honor,” Jones said. “He has never, ever been a source of pride for the people of this state, only a source of embarrassment.”

And for his part, Moore has continued to push beyond the norms of political civility. Speaking to a Christian radio host Monday, Moore implied that liberal billionaire George Soros, a survivor of the Holocaust, was going to hell. “He is pushing an agenda and his agenda is sexual in nature, his agenda is liberal, and not what Americans need,” Moore said. (BEGIN OPTIONAL TRIM.) Before the rally Tuesday, Dean Young, a senior adviser to the Moore campaign, was helping set up. Wearing a red “Make America Great Again” hat, he scoffed at the notion that Moore was feeling the heat of a close race.

“Judge Moore doesn’t scare,” Young said. “He’s going to keep fighting for what he believes in the end. And that would be his God — and that’s the Christian God, let’s make this clear — and the country.”

“And he will continue to do that,” Young added, “once he gets to Washington.”

(END OPTIONAL TRIM.) Kevin Spriggs, who owns three convenience stores in nearby Daphney, said that the election came down to a simple choice. “I don’t like the allegations; it made me uncomfortable,” he said as he waited for the speeches to begin. “But with Doug Jones you’re getting a real live Democrat.”

McConnell’s opposition to Moore, he added, was only strengthening the resolve of voters like him. “I consider myself a Republican activist. Yet I feel like my own leadership is shooting me in the back.”