For Elizabeth City, it's the most wonderful time of the year 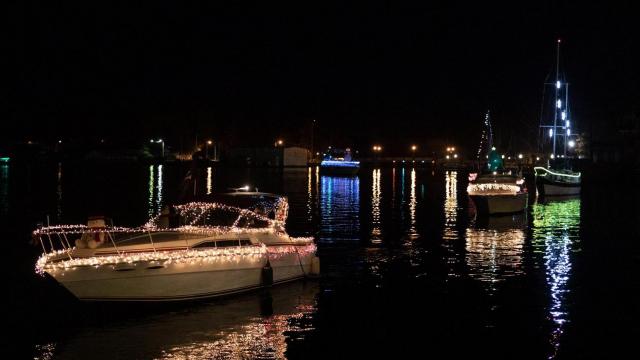 In Elizabeth City, the most wonderful time of the year is a little more wonderful than others.

Main Street is filled with lights, local businesses compete for the most festive window displays, and lucky wanderers may even catch a glimpse or two of Santa Claus.

For those in town, it's like a holiday movie come to life.

"Our downtown streets are typically packed, and it kind of reminds you of an old-style downtown Christmas, where people are wandering and looking in the windows and greeting each other on the corner to say hello," said Debbie Malenfant, Executive Director at Elizabeth City Downtown, Inc. "We love having the events, and we really want the town to feel like a Christmas town — and not just when there's an event. We want people to come down anytime during the holidays and feel that one-of-a-kind Christmas holiday movie feeling."

In Malenfant's role, she helps coordinate events for Elizabeth City's downtown district — and while the area offers events year round, there's nothing quite like the display they put on around Christmastime.

The holiday season kicks off the Friday after Thanksgiving with the Downtown Celebration & Grand Illumination, where everyone strolls down Main Street, enjoying displays in shop windows, hot cocoa and caroling, all culminating in a countdown to the official downtown lighting.

"We'll walk down our Main Street and usually at many of our retail locations and dotted along the street, we have a variety of kid and family activities. We'll have Santa Claus roaming around, tea parties, sleigh rides and give out gingerbread cookies and hot cocoa and other types of sweets and things," said Malenfant. "Most of the businesses and restaurants participate and everyone is all decorated for the holidays — it really is magical."

In addition to the downtown lighting, Elizabeth City also hosts an annual Christmas Parade, as well as a Lighted Boat Parade. The first weekend of December is packed with these celebrations, as well as a First Friday ArtWalk; a monthly celebration where downtown Elizabeth City comes alive with artwork, artist demos, and live music; and Small Business Saturday; which sees businesses and restaurants across town decking out their stores and offering special holiday deals, creating a unique shopping experience.

For the entire month of December, it's a town-wide affair.

The various events and holiday gatherings are only possible through community support, and luckily, Elizabeth City has no shortage of that. In fact, the Christmas Parade usually brings in over 100 floats and entries over the three mile parade route, and the Lighted Boat Parade was recently named one of the Top December 2020 Events in the Southeast by the Southeast Tourism Society.

Debbie Bush Brinson is Fleet Captain of the Pasquotank River Yacht Club, the group that runs the Lighted Boat Parade. Bush Brinson has been involved with the event for years, since her father, now retired commodore of the fleet, previously served as the club's fleet captain.

"After the ArtWalk is done, we pass out glow sticks so that when kids and families come down to the waterfront, they can wave at us as we parade by. Through working with the ArtWalk, we're able to pull more people in for the boat show," said Bush Brinson. "Everyone decorates their boat, but the sailboats are a favorite — they can string lights all up and down the boat. Other people have Christmas trees and different themes. Everybody does something different, but unique, so no one looks alike."

In the future, Bush Brinson hopes to see more boats get involved with the Lighted Parade, especially since it's now an award-winning event.

From the various parades to the town lighting, Elizabeth City's Christmas celebrations give cities twice its size a run for their money — and for Bush Brinson and Malenfant, there's no place like home for the holidays.

"I've been to New York at Christmas, and the windows at Macy's were amazing, and seeing the Rockettes — that was the most beautiful show I've ever seen in my life. But it doesn't compare to the close-knit things that go on in a community like Elizabeth City," said Bush Brinson. "The Rockettes are beautiful, but you're sitting in a big giant room with hundreds of strangers. That doesn't compare to walking down Main Street, seeing family and friends, seeing kids run around and be so excited and happy, you know?"

Out of town visitors who wish to experience Christmas in Elizabeth City are also welcome to take part in the holiday magic the town conjures up. Visitors and residents alike can get the most up-to-date information on the holiday season at ChristmasInElizabethCity.com.

"I'm not sure what that celebration will look like this year, but we obviously will still do all of our decorating, and we may even do a virtual lighting," said Malenfant. "The holidays most likely will be different than last year, but it could lead to more positivity as we slow down a little bit and appreciate the feel and the decoration and the small businesses and the effort that they're going through to make the downtown feel great."