For Couple With Moebius Syndrome, Love Is Expressed From the Heart 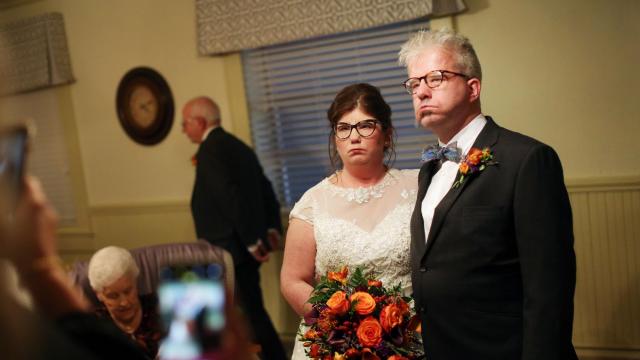 Alex Barker wasn’t expecting Erin Smith to smile when they met in 2015 after almost two years of getting to know each other online. He knew he wouldn’t either. Not because he wasn’t sure he would find her wonderful, but because, like her, he can’t.

Barker, 46, and Smith, 39, were born with Moebius syndrome, a rare neurological disorder that causes facial paralysis and affects fewer than 20 in 1 million people.

They had met only a handful of others with the disorder until Tim Smith, a man with Moebius from Remington, Virginia, created a Facebook community for the afflicted in 2013. But after a few Facebook Messenger exchanges neither Barker nor Erin Smith (no relation to Tim Smith) doubted their compatibility went deeper than their condition.

“When we started talking through the internet group, it suddenly became apparent that there was something more there than friendship,” said Barker of Coventry, England. “I can remember the first time we Skyped in January 2015. I thought, she’s quite nice looking.”

That wasn’t the outcome Smith of Linwood, North Carolina, was necessarily looking for when she struck up a chat with Barker in 2014. “I was just going through all the different people on the group, looking around, when I found Alex. I was like, ‘Oh, wow, he lives in England,'” she said.

Smith had visited London as a recent high school graduate in 1998 and dreamed about one day returning. “I thought it would be kind of cool to have a friend there with the same condition,” she said. When she sent her first message, a simple nice-to-meet-you, she was surprised by how quickly he responded.

“Then we just started talking all the time,” she said. “We became really close.”

Smith, who worked as a medical assistant at Wake Forest Baptist Health’s urgent care facility in Clemmons, North Carolina, wasn’t used to making close friends outside Linwood, where she has lived on her family’s 300-acre soybean, corn and hay farm since birth. Small-town living suited her: People with Moebius attract strangers’ attention with their expressionless faces and impaired speech — another side effect of the damage to facial nerves — and there are few strangers in Linwood, a town of about 5,000.

“Obviously, growing up was sometimes difficult,” she said. In addition to her facial paralysis, Smith was born with a club foot. (Limb abnormalities are common among people with the syndrome.) “But I wasn’t really picked on at school because we all grew up together and everybody knew me and my background,” she said. The closeness of the community helped steer her past the feelings of alienation and loneliness that often set in early for children with Moebius. Her temperament helped, too.

“Going through school, I never saw Erin come home completely upset or terrified. She didn’t get bullied much mainly because of her personality,” said Smith’s father, Bobby Smith. “She’s always been a cheerful, happy person. You can tell when she’s smiling even if it’s not on her face.”

Those closest to Smith say they can see the smile in her eyes. Both she and Barker also communicate their feelings verbally and with affectionate hugs.

Barker, an advice and information officer at AbilityNet, a British nonprofit organization that helps people with disabilities use technology, also sensed Smith’s constant if concealed smile. After a few Skype sessions, he thought he might like to see it for himself, in person.

During a 2015 video chat, he told her he had a week of vacation coming up that November and no plans. “She said, ‘Why don’t you come and see me?'” he said. “I was like, that sounds quite good. I was thinking, if Erin and her family are the worst people ever, it’s still a week in the States. I can still go and buy American things, so it’ll be OK.”

When Barker landed in North Carolina, the Smiths — Bobby and Erin’s mother, Luann — did not make him want to flee for the nearest Walmart. “As soon as I met her family I felt at home,” he said. “They’re so warm and welcoming. And the second I met Erin I knew she was the girl for me. In my heart I was hoping that something would happen, but I didn’t know if it would.”

It did. Barker’s 2015 vacation, filled with local wine tastings and visits to the nearby Blowing Rock mountains, included a first kiss, and then a series of them. Bobby Smith had never seen his daughter so happy. And he had never seen her so unhappy about the prospect of waiting seven months for a reunion. The National Moebius Syndrome Foundation Conference in California, where the couple planned to meet next, wasn’t until July 2016. So before Barker flew back to England, Bobby Smith pulled him aside.

“He said, ‘Son, I want you to come back,'” Barker said. “And I was like, what? Then he said he would pay for me to come back and surprise Erin for Valentine’s Day.” Barker didn’t hesitate. He said yes to the offer.

Erin Smith chokes up when explaining why Valentine’s Day 2016 was among the best days of her life. “We realized that week Alex came to visit that we were connected and that this was meant to be,” she said. “When I found out my father offered to bring him back out here for Valentine’s Day, it was obvious my mom and dad knew as well.”

A party the Smiths arranged for more than 100 guests at the Wine Sellars Wine Shop and Bistro, in Lexington, North Carolina, on Feb. 13, 2016, was ostensibly to raise money to help send Erin Smith to the Moebius conference in July. But “about two hours into the fundraiser, my dad decided to make a speech to thank everyone for coming out to support me,” Smith said. “Then he said, ‘Me and mom wanted to do something special for you, too.'” Courtney Mason, Smith’s best friend since childhood, captured what happened next on video: Barker wanders into the crowded restaurant, and Smith lets out a shriek. She runs down the hall and throws her arms around him as party guests, many who have known Smith since birth, hoot their approval.

For Barker, the Valentine’s Day trip confirmed what he already knew. He was in love with Smith, and he wanted to spend the rest of his life with her. “I never set out to fall in love with someone who has the same condition,” he said. Like Smith, he had dated people without the syndrome. He was once engaged, briefly. “But actually I think it makes things so much easier,” he said. “If there’s one real connection between people with Moebius, it’s the experience of being stared at. It can cause you to feel really isolated, because having a smile is so important. If you don’t, people think you’re unfriendly. Sometimes it’s quite hard to meet people, because you become so self-aware about how you look as opposed to how everyone else looks.”

With Smith, he added, “we’ve got this shared bond, even though Erin is quite a bit less affected by the syndrome than me,” he said. Barker has two club feet, which affects his gait but doesn’t slow him down. And “I don’t have all my fingers and toes, so I find doing everyday things a bit more frustrating than she does.”

Barker’s physical limitations didn’t stop him from orchestrating a proposal someone without disabilities might have found daring. And stressful.

In July 2016, Barker and Smith reunited, as planned, for the Moebius Conference in Long Beach, California. Before the conference started, they met for some sightseeing. On July 10, after taking in a baseball game, they sauntered around the Santa Monica Pier. Barker seemed nervous. Smith couldn’t figure out why. “He wasn’t acting right. I was like, ‘Is something bothering you? What’s wrong, honey?'” Smith said.

He was on a slatted boardwalk with a diamond engagement ring in his pocket — a family heirloom given to him by his godmother in England — and he wasn’t sure how the proposal would unfold, or if he would drop the ring between the wooden planks when he got down on one knee.

“I’ve played the moment back again and again and again in my head,” Barker said. “I said, ‘Erin, will you be my wife?’ And there was this moment of stunned silence. I was worried she was going to say no.” Instead, she said, “Of course I will.”

“I was shocked,” Smith said. But the shock gave way to love and gratitude. “It was an amazing moment. I called my parents right afterward. Some of my friends had said, he’s going to propose in California.” Even so, “I still couldn’t believe it.”

The thrill of the engagement was followed by a dilemma: On which side of the Atlantic would they live as a married couple? For Smith, who spent the holidays in Coventry in 2016 and rung in 2017 there, the decision was difficult, but clear.

“I love England, so that’s where we’re going to live, but only for two to five years,” she said. After that, they plan to move back to North Carolina. Her parents are happy for her, she knows. “But I also know they’re also sad I’m leaving.”

Bobby Smith said he worries his daughter will be homesick. But “Alex is going to take care of me and his parents are going to take care of me,” she said. Brian and Florian Barker, Alex Barker’s parents, also live in Coventry; they welcomed her as warmly as the Smiths welcomed Barker when they first met him, and they consider her a daughter already. “Alex and Erin have this connection where they recognize each other. They see each other as complete people,” Florian Barker said.

On Nov. 10, Barker and Smith were married at the Smith family’s church, Second Presbyterian in Lexington, North Carolina, by the Rev. Brian Rummage, the pastor. Smith, in a white cap-sleeve ball gown with a lace train and her long brown hair piled beneath a rhinestone clip, walked down the aisle with her father. About 200 guests lined the pews and watched, smiling for her, as she carried a bouquet of roses and lilies in vivid autumn shades of red, gold and orange. Barker wore a bow tie in Smith’s favorite color, purple — also the color associated with Moebius syndrome awareness — and a charcoal suit from Marks & Spencer in London.

Mason, Smith’s lifelong best friend, shared matron of honor duties with another best friend, Holly Whitten. Both wore long violet dresses, and each fought tears as Smith approached. “I love them both to death. It’s just the most wonderful love story,” Mason said. The traditional ceremony performed by Rummage hit a snag when Barker had trouble fitting the ring over Smith’s finger. But Barker wasted no time in regrouping. Seconds later, when he and Smith were pronounced married, they walked from the altar arm and arm to Stevie Wonder’s “Signed, Sealed, Delivered.”

“I’m yours!” Barker sang out, pumping his arms as he and Smith strutted into their future.

Keeping It Local After the wedding, guests decamped to the Weathervane Winery in Lexington for a reception featuring local wines. “We both love wine — the drier the better,” Smith said.

Southern Tradition A picnic-like buffet of barbecue pork and chicken on hamburger rolls, plus potato salad and coleslaw and sweet tea, was catered by Backcountry Barbecue, in Linwood, North Carolina. Bobby Smith said he gets his lunch there every day while tending the farm.

Intercontinental Couple British and American flags poked out of the wedding cake, a two-tiered glazed confection. On Nov. 14, Barker and Smith left for Coventry, England, where they now live. After their arrival, they celebrated with a “ceremony of blessing” performed by a local vicar. “It’s our way of welcoming Erin to England and to our family,” Florian Barker said.