For Carteret County family, real estate is a family affair 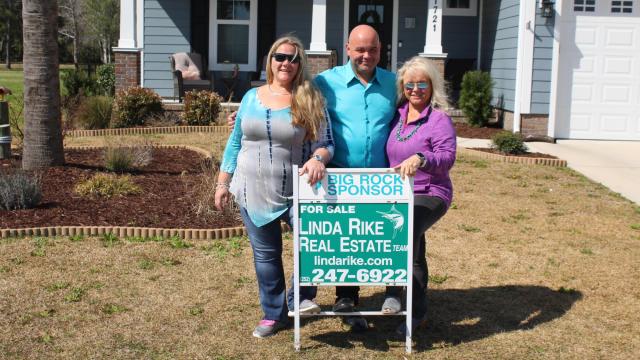 Most 12-year-olds spend their free time hanging out with friends, playing video games or watching Saturday morning cartoons. But by the time Kelinda Rike was 12 years old, she had trained her way into becoming an expert assistant.

With her mother in real estate and her father in demolition contracting — and no cell phones or answering machines at the time — the responsibility to transcribe messages during the workday often fell on Kelinda's shoulders.

"I remember one time, I took a message for my dad and maybe a day or two later, he said, 'I want you to know that so-and-so told me he called, and you took a message.' I said, 'Uh-oh,'" Kelinda laughed. "[He] said, 'I want to know who your secretary is. ' And my dad replied, 'That's not my secretary, that's my 12-year-old daughter.'"

Now a grown woman taking messages of her own, Kelinda has joined her mother, Linda, and brother, Wyatt, at the helm of Linda Rike Real Estate, making the business a full-on family affair. Although Kelinda and Wyatt have found their calling in the real estate industry, neither of them ever imagined following in their mother's footsteps — and Linda shared that sentiment, as well.

"My daughter, Kelinda, said to me one day, 'I think I'll get a real estate license.' I sort of nonchalantly said, 'OK.' I didn't want to push her, didn't want to make her feel like she had to do it. She surprised me, did it, and got her license," Linda said. "Then her brother, Wyatt, turned around and said, 'I think I'll do that, too.' I said, 'OK, go get your license.' So they both did it, just because they wanted to, with no pressure from me pulling them or pushing them either way."

When Linda decided to get into real estate, she had no idea it would become a lifelong career that would carry on to her children, especially since she already had her master's degree in education with an emphasis in counseling. But after a disappointing experience with her own real estate agent and dwindling interest in her job prospects, curiosity led Linda to look into the real estate business for herself.

Renovating and selling her first home ignited a passion in her for buying, fixing and selling properties, and it didn't take long for Linda to secure her real estate license and branch off into her own agency. Of course, buying and selling homes is easier said than done, and Linda has seen her fair share of challenges over the years.

"Working with your family — you can rely on each other for support, and you're not as competitive. In general, real estate agents are competitive," Linda said. "When you're in a family business, you're doing business the way it's supposed to be done and realizing that each and every one of us has our own little sphere of influence, and we all do our own thing our own way, but we're not really competitors. Most family-owned, family-run businesses are held close. We understand each other and help satisfy whatever each other needs. If one of us needs to be out of town or we need to be at an appointment, one of the others will gladly fill in."

For Wyatt and Kelinda, all the years of watching their mom operate helped them hit the ground running while they added their own strengths to the makeup of the business. In Kelinda's case, she was awarded Rookie of the Year in her first year of business. For Wyatt, it's all about making connections with clients — he was even asked to be a witness for a beachfront wedding of two previous clients.

Linda firmly believes that the best way to judge future performance is to evaluate past performance — and at Linda Rike Real Estate, the family-centered aspect has garnered plenty of acclaim over the past few years. Notable awards include being named one of the top five teams for both listing and selling in 2019, as well as annual recognition from the Board of Realtors for production.

Behind that success lies a relatable family dynamic— one that keeps clients coming back for business and sending references their way.

"It's great that we're here together, and honestly, who else would have me?" Wyatt joked. "Me and my sister argue every now and then, we'll get into it every two or three months for five or 10 minutes, then the next day it's nothing. We don't hold grudges."

Added Kelinda, "He knows what he knows, and I know what I know, and I always think I'm right, and he always thinks he's right — whether either one of us is right or we're both wrong. We're competitive with each other, not with mom, but it gives us a little camaraderie."

"But getting into the family business has been good," she finished. "We all love to do it, and I would not want to be in this business with anyone else."