For Carmakers, Auto Shows Are No Longer Can’t-Miss Events 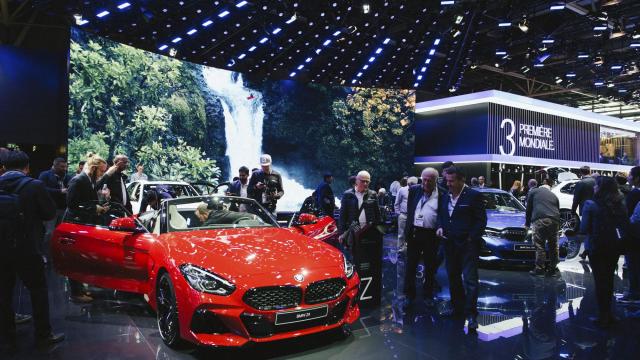 PARIS — At the Paris Motor Show last month, the first international extravaganza of the new-car season, the press had to scramble to find the special among the predictable.

The excitement among the media scrum — short-lived as it was — flowed from a stand introducing the VinFast, a generic-looking SUV that was to be the first car built in Vietnam (the company had a sedan, as well). Miss Vietnam, in glamorous attire, was there, along with dancers in traditional clothing holding long sticks.

Such is the state of the auto show in 2018: A startup from Vietnam grabs the media glory, and — Ferrari notwithstanding — companies like Ford and Fiat, Volvo and Volkswagen, do not even bother to show up.

“Motor shows are dead.” That was the bold declaration made by Herbert Diess, Volkswagen’s global chairman, this past summer during a visit to the annual Goodwood Festival of Speed in Britain. The events are “a product of the 1960s, and they are not as relevant anymore,” he told Motoring.com, an Australian magazine. “They’re not delivering what we want, and they’re not delivering what car buyers want.”

Perhaps Diess was taken by the joyous contrast at Goodwood, which showcases cars in a bucolic outdoor setting and offers visitors ride-and-drives, concerts and Champagne along with the latest models.

It is certainly a far cry from the traditional circuit in cavernous convention centers, which reaches California this week for the 2018 Los Angeles Auto Show. But even before the formal press days began Wednesday, some key unveilings — new cars from Mazda, Mini, Honda, Jeep and Porsche, among others — were either shown to the press off site or given a sneak peek online.

And in an attention-getting twist, Volvo elected to rent a stand and not display a single vehicle. As Marten Levenstam, a Volvo executive, explained to reporters: “Now is the time to really do different things in a different way. This is just one example of that.” Instead of cars, Volvo and its partner company Luminar displayed advances in LiDar technology, which uses lasers to aid autonomous vehicles in detecting objects in their surroundings.

In Detroit, officials have moved the traditional show, which has been held each January since forever, to June in 2020, hoping to attract potential buyers to an outdoor event where they can drive as well as gawk at cars.

Furthermore, the roster of no-shows so far announced for Detroit this coming January, before the switch, is already formidable: Volvo, BMW, Audi and Mercedes-Benz, among others, have already confirmed that they will not attend. Of course, many no-show companies send scouts to assess the competition.

What used to be obligatory attendance at big-time shows, to attract thousands of media types in one place, is now past.

“If we don’t have a proper unveil for a show, we won’t go,” said Mark Dahnke, a spokesman for Audi. He likes to mention the adoption of a “launch cadence,” and Audi’s conviction that bringing journalists to a one-off event, to spend a day or two with the car, is the more effective road to press attention. To that end, Audi recently invited 1,200 auto writers to San Francisco for the introduction of the E-tron, an electric SUV.

“If you do have a big reveal, the media doesn’t have enough time to digest properly what you’re doing,” Dahnke said, referring to auto-show introductions. Reporters “are covering 10 or 15 different brands in a day, and it causes you not to be able to cover a larger topic that might be more complex.”

For some manufacturers, the return is not worth the investment. A major presence at a show, with a display and news conference — plus lighting, music, catering and the other accouterments — can cost a half-million dollars or much more.

The digital landscape, overall, has altered how cars are marketed: Last year, BMW introduced its M5 in an Electronic Arts video game. (BMW did take the opportunity in France to unveil its new 3 Series sedan.)

“All the manufacturers are handing out photos, spec sheets, interviews in advance of a lot of these shows,” said Steve Keyes, communications director for Centigrade in Detroit, which handles publicity for Alfa Romeo, Genesis and other brands. “If I’m a journalist, I’ve got all the information I need before a show — well, going to one is sort of a moot point.”

Despite the declaration of Diess at VW, one exception to the trend of abandoning the auto show, at least in the United States, is Volkswagen.

“Because of the large attendances, auto shows sell cars,” said Greg Lucia, a marketing spokesman for Volkswagen. “We look at auto shows as a fundamental way to get our product in front of consumers who are in the purchase funnel.”

Mark Gillies, a spokesman for VW of America added: “For us as a small brand in the U.S., shows bring in large numbers of media. We can get the kind of exposure that’s difficult for a 2 percent player, the way a General Motors or Toyota can do outside of an auto show venue.”

Diess’ damning opinion grates on many other decision-makers in the automotive industry, who say the major shows — which usually open in the fall in Paris or Frankfurt and extend into the spring in Geneva and New York — are the defining ingredient to entice customers into showrooms.

“About 68 percent of those who come to our show are in the market for making a car decision,” said Mark Schienberg, who was visiting Paris in October. “That’s where the investment really takes off.” Schienberg is president of the Greater New York Automobile Dealers Association, which organizes the New York International Auto Show each spring.

“The issue for manufacturers is that they only have 20 minutes to do a press conference,” he said. “They want more time. We get it. But we stress to them, do something at the show, because you can’t fit 6,800 journalists in whatever outside venue they’re doing.” While reports of the auto show’s death may be exaggerated, the portents are ominous.

In Paris, acres of show floor were occupied by motorcycles and lots of Suzuki cars and trucks, a budget line that has largely abandoned the U.S. market. (It still sells motorcycles here.) And some of the companies that did go to Paris tried to leverage the situation by negotiating for a lower stand rental. That didn’t work, said Jean-Claude Girot, the event’s chief.

“I am not receptive to that,” Girot said. “We are a commercial operation, and we must have profits.”

He did allow that changing the generic formula is a must. “We have to reinvent — be more inventive, but no less interesting,” he said. “Smaller booths, perhaps. We have to fight to be better, to show better things to the visitors and press, and to keep the passion.”