For Afghans, ‘Words Do Not Have the Strength’ to Speak of Existential Crisis 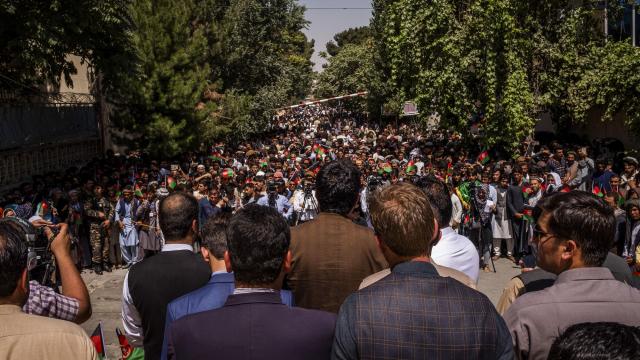 KABUL, Afghanistan — In the past 17 years of war and crisis in Afghanistan, no one remembers a season quite like this one, with peril and hopelessness at every turn. People here struggle for words to explain how it feels.

A former minister, fit with healthy habits and hardened by years of battle and politics, said he could barely force himself out of bed in the morning. A young professional, after years of dedicated work in civil society and government jobs, teared up as she tried to explain why she was losing hope, her usual clarity choked by emotion. A poet in the country’s east said his verse had dried up.

“Every time something bad happened, I would turn to poetry — it would give me calm,” said the poet, Sajid Bahar, 26, who lives in the city of Khost. “It’s been seven months that I can’t write. It no longer gives me calm. When I sit down to focus on one incident for a poem, 30 others flash through my head. My words do not have the strength for all of them.”

If there is a common theme in this upswell of alarm and worry that seems so widespread, it is a sense that no one sees any clear path through a minefield of crises.

And with a parliamentary election coming on Saturday, in which 2,500 candidates are contesting 250 seats, the possibility of widening political disputes and intractable division poses an immediate concern. After five elections and nearly $1 billion spent on them, there is little consensus on how voting should happen, and elections have become flash points for instability.

Any one of the problems facing Afghanistan right now would be an urgent national issue. Together, they have created an existential moment.

Afghan and international officials consider the Taliban’s toll on the security forces to be unsustainable, as the insurgents continue to threaten districts and towns. The daily toll, all sides of the war included, often reaches 100 dead.

Officials acknowledge the only hope is to bring the Taliban to a political reconciliation through peace talks — even though the insurgents have offered no convincing indication they are willing to accept any basic tenet of the democratic program here, including elections or hard-earned rights for women. This best-case scenario for ending the war is chilling for an entire generation of politically active young Afghans who do not want to go back to repression or civil war.

At the same time, an intensified campaign of suicide bombings by Islamic State loyalists in Kabul, the capital, has brought new menace and deepened sectarian divisions. The repeated violence against Afghanistan’s Shiite minority has soured people on the government’s promises of protection, and it is doing more than anything else to raise fears that national unity cannot hold in the face of an increasingly complicated war.

Criticism of President Ashraf Ghani’s coalition government has grown intense, on both the security and political fronts. A growing opposition movement of political elites accuses him of trying to rig the electoral system. These politicians have pushed to bypass elections altogether and declare an interim government, and some who can call on armed militias have even threatened to reject the election results by force.

But Afghans still believe in the promise of some kind of democracy, and they want to vote even though they are disillusioned. Despite the tensions, and the fact that at least a third of polling stations across the country will not open because of the war, the parliamentary vote will go ahead on Saturday.

At least 10 candidates and dozens of their supporters have already been killed, including a parliamentary hopeful, Abdul Jabar Qahraman, who died in Helmand province on Wednesday when a Taliban bomb blew up under his chair.

Geopolitically, worsening U.S. relations with three crucial neighbors of Afghanistan — Pakistan, Russia and Iran — have raised fears that those countries will intensify their meddling in the war to punish the United States. Afghan and Western officials say Pakistan refuses to stop sheltering the insurgency’s leaders or use its influence to slow the Taliban’s momentum. And both Russia and Iran, they say, are increasing their aid to the Taliban.

In this fragile environment, the physical encroachments of violence have given a new shape to life’s routine in Afghanistan.

In Kabul, there is no more visible symbol of the change than the network of concrete blast walls protecting the elite, turning the streets into a maze. Behind those walls, political and diplomatic energy is sapped by problem after problem, each solution offering a bit of relief but no breakthrough toward ending the war.

A concerted military and intelligence push over the past month has brought a rare reprieve from suicide bombings. Suspects have been rounded up in large numbers, and insurgent networks disrupted somewhat, officials say.

But the fear of that next big bombing remains, and with it a conviction that ordinary Afghans will again bear the brunt. So residents see in those blast walls a reminder of their own vulnerability, and life continues as a daily resistance.

The teacher on his bicycle navigates armored vehicles and armed guards on his way to school. The cafe is briefly deserted after a blast, and then it returns to its normal chatter. The blown-up wrestling gym starts rebuilding, one brick at a time. The student who survived a massacre in a lecture hall shows up for an exam days later, his head wrapped in gauze.

Some see the crumbling of an untenable structure created by the foreign presence as a necessary trial by fire to get to a new and more sustainable way. “We had a fake economy, fake money and fake prosperity. Security was provided by foreigners,” said Mirwais Aria, who has been trying to grow a small chain of burger cafes called Mazadar. “Our role, our input, our understanding was limited.”

“My sense is that the situation will get worse as that fakeness crumbles, that we will reach the edge of collapse before there is a move for the better,” he said. “But once it crumbles, we will see that underneath, the society has actually transformed.”

Others continue with the routine of advocacy and politics, in the face of tremendous uncertainty. At the core of that resistance is the generation of Afghans who have come of age in the past 17 years, enjoying some happier times and possibilities.

Ghani sees this group as key to escaping the quagmire — what he has described as putting out a fire in one house while simultaneously building a new foundation next door.

He has appointed many young officials to important government jobs, ignoring criticism that he is abandoning experience at a crucial time. But thousands of other youths are fleeing, risking a dangerous trek even when it is clear that Europe has shut its gates.

The vote on Saturday is turning into an important contest between an entrenched elite against young, educated Afghans who have decided to stay and try their chances.

“This election is an arena for two generations: one that is about the glories and the grievances of the past, and a younger generation that wants to build the Afghanistan of the future,” said Sami Mahdi, a journalist who is running for a parliament seat in Kabul.

“In my conversations, people still have a lot of hope in this new generation — that they can stand against the corruption, against the warlords, against the stereotypes,” Mahdi said. Muqadessa Ahmadzai, 25, is running in Nangarhar province, where many districts are under threat from the Taliban or the Islamic State, and where the provincial capital, Jalalabad, has been wrecked by repeated suicide attacks.

She says she is running for parliament to try to correct some of the wrongs of the elites, in any way she can.

“We have not received the kind of representation we expected,” said Ahmadzai, who led a nonprofit group that established literary hubs in schools for female writers. “Not only did they not fight for our rights, but they actually abused our rights.” She added: “They are the reason for Afghanistan’s crisis.”

The months ahead will likely prove even more testing to the patience of ordinary Afghans, and to the coherence of the central government.

The voting on Saturday is likely to produce the kind of localized disputes that will, once again, put the coalition government and its international partners in firefighting mode.

“We waited a long time, hoping that it would get better next year, and then the year after and then the year after. But it’s not happening,” said Bahar, the poet. “I will wait another few months, until the presidential elections. If it doesn’t improve, I will have to find a smuggling route to another country.”

He added: “In a different country, at least I can go up a mountain, sit by the water. At least my mind will be at ease.”