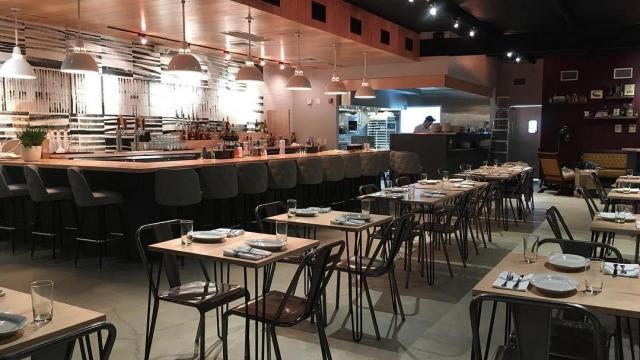 Raleigh, N.C. — It was announced this week that Blue Cross Blue Shield of North Carolina is providing 20 fresh, healthy meals per day for 365 days to those in need via A Place at the Table in Raleigh. So cool! A Place at the Table, located at 300 West Hargett Street, invites customers to pay what they can for a fresh, healthy meal while experiencing community and conversation in the café. On May 10 and11 Blue Cross NC will present Thrive NC, a two-day event featuring an immersive culinary experience with contributions from top chefs and restaurants. Tickets for that event go on sale at the end of February.

In downtown Raleigh, the folks over at St. Roch Fine Oysters + Bar announced recently that they have begun brunch service on Saturday and Sunday, open 10 a.m. until 2:00 p.m. on those days. This is in addition to their evening dining hours. They also noted that their oyster bar stays open all day on the weekend! Check out their full menu and get all their details here.

The ITB Insider reported this week that , a California-based franchise offering its own spin on the traditional Hawaiian dish poke, opened its first North Carolina location last week at 2604 Hillsborough Street. Get familiar with them here.

Congratulations to chef Dean Thompson at 41 Hundred at Raleigh Renaissance Hotel for coming out on top of this year’s Cooking for a Classic chef competition.

Speaking of North Hills, a quick update thanks to the folks over at the ITB Insider - work has begun on the Bartaco that will open next to Mura. The initial information from North Hills listed a summer 2018 opening. There is also a Bartaco in Chapel Hill.

In Cary, reader Christine Johnson notified us that she spotted a coming soon sign for the next location of . It will be in Cary’s Crossroads shopping center in the former Tasu at 2007 Walnut St. No word yet on an open date.

And speaking of Cary, if you are over that way, Postmaster is holding their Grand Opening today (February 9) with specials on cocktails, wine and beer along with some special items the chefs will be preparing.

Down in Apex, got word from readers B.J. Meier and Brian Kachel that a new Italian restaurant called Osteria G is opening very soon (like hopefully next week) at 5160 Sunset Lake Road in Apex in the former Little Hen spot.

Also in Apex, I’m not really sure what happened here, but what I do know is that the Blistered Pig is now Cantina 2 Twenty Five (of course, located at 225 Salem Street). They serve up Mexican cuisine, featuring unique tacos, tequila and mezcal. Thanks to David Amann for letting us know about the change.

The folks over at Taste Carolina notified me that there is a new North Indian restaurant called Naan Stop over on Erwin Road next to Black Twig, and their website (get this) is Naan Stop Duke. Love all these clever names.

Also in Durham, a huge shoutout and congratulations to the folks over at Toast on celebrating their 10-year anniversary!

Congratulations also to the folks over at Carrboro’s ACME Food & Beverage Company as they celebrate their 20-year anniversary. And they are holding a party (like it’s 1998 - sorry Prince) on Saturday, Feb.17 from 8:30 p.m. until 12:30 a.m. They will have a heated tent behind the restaurant and will have dancing, snacks, drinks and (of course) a damn good time. Admission is a $20 donation to Be Loud! Sophie, which supports adolescent and young adult cancer patients at UNC Hospitals.

Over in Chapel Hill, we have now confirmed that the Korean restaurant MinGa is moving from its current location into the former Captain Poncho space on Franklin Street, near the intersection with Estes Drive. Look for them to open the new space in March. Thanks to Matthew, the Burgeoning Baker, for the tip.

In downtown Durham, the owners of the popular restaurant Old Havana are in the process of transitioning into a new concept, Copa (a farm to table tapas and cocktails of old Cuba), in the old Revolution. They are looking to open the new venture in March. However, to complete that dream, they are asking for community support to make renovations/furnishings possible.

Art Sheppard, the Wandering Sheppard, noted that the date has been set for the next edition of Rodeo on Rosemary over in Chapel Hill. This year it will take place on April 22 at 12 noon featuring 15 of the best trucks in the Triangle.

Art also tipped me off to the fact that there is another new truck roaming the streets of the Triangle - and you are going to love the name, and the food. It is Pork in the Road, and you guessed it, serving up everything pork (with a few options for our vegetarian friends).

Two great sites to keep up with your favorite food trucks. Street Food Finder is one, and another, aptly named, is Roaming Hunger.

March 17 is the date for the second annual Food Shuttle Garden Gallop 5K to benefit the Inter-Faith Food Shuttle’s Growing School Gardens program (better known as the Sean is Faster Than Gordon race). If I can do it, you can do it! Come on out and support a great cause.

Durham Magazine, Chapel Hill Magazine and Chatham Magazine return with their popular culinary event, Taste, to take place April 18-22 highlighting culinary talents. The event will feature over 30 of the area’s top chefs at four unique events throughout the week.

Go ahead and mark your calendars and get your tickets for the Food Bank’s Chef’s Feast at Fearrington Village coming up on March 22. Four renowned chefs will prepare and serve favorite recipes through four courses in an intimate environment. Guests will enjoy beverage pairings, an opportunity to bid on unique auction items, and learn more about what the Food Bank and its partner agencies are doing in the community for those facing food insecurity.