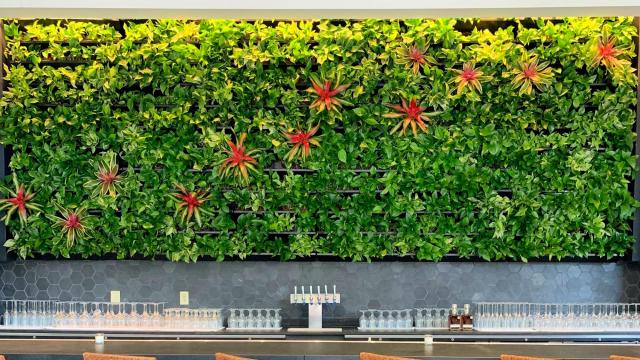 Raleigh, N.C. — The Triangle Explorer and WRAL were the first to share the news that celebrity chef Kenny Gilbert announced plans Thursday to open a restaurant in north Raleigh. Cut & Gather is expected to open at 13100 Falls of Neuse Road in early 2020. The restaurant will feature wood-fired Southern cuisine, including barbecue and seafood. If you are not familiar with Gilbert, he is known for being a fan favorite on season seven of Bravo's "Top Chef." He was a winner on the Food Network's "Beat Bobby Flay" and has judged "Chopped Junior." In addition to cooking at the G8 summit, Gilbert also prepares Oprah Winfrey's personal holiday meals each year.

Today is the day! Friday, Nov. 1 marks the opening of the much anticipated kō•än in the former An space in Cary. Sean Degnan, chef Drew Smith and their team are opening the beautiful space today at 2800 Renaissance Park Place. Smith’s menu and vision for kō•än includes an array of small plates meant for sharing like Lobster Gyoza, Steamed Buns and Duck Larb, along with large plates like Singapore Chicken Rice and Yakisoba. Expect to find inventive bowls on the menu as well like the kō•än Ramen and Vietnamese Pho with Wagyu Beef Short Rib.

Rosewater Kitchen & Bar opened this past Tuesday, becoming the first Raleigh concept from the Giorgios Group. Located in the Park District at North Hills (in the old Bruegger’s space - which you won’t recognize) is now serving dinner Monday through Saturday and brunch on Saturdays and Sundays. Soon, Rosewater will also open for breakfast and lunch service. The space has been transformed into “the piazza where people gather to exchange laughter, bites, and great cocktails and wine...a true gathering center.”

A quick update on the next location of Showmars coming to the Triangle (there is already one in Wake Forest). We got word this week that the grand opening is set for Saturday, Nov. 9 and it will be in Durham’s The Corners at Brier Creek out off Glenwood Avenue in the same shopping center as Harris Teeter. Founded in Charlotte in 1982, Showmars serves breakfast, lunch and dinner and their menu features a diverse mix of Greek, Southern and American dishes with signature items including gyros, pita burgers and fresh salads.

Got word this week from Jan Delory that Preeti Waas, who owns Sugar and Spice Kitchen, is opening up a concept called Cheeni in the lobby of the Y building on Fayetteville St where Brew used to be. She will be serving up coffee, chai and tiffin (a light snack or lunch in India) along with offering superfood smoothies and acai bowls by Frameworks Juice Kitchen. They are having a soft opening this Saturday, Nov. 2.

Heard from reader Keri Owen that a Cuban restaurant and rum bar called Rumba Cubana is taking over the former Lost Cajun building in Wake Forest. This is being headed up by Randy Hernandez who you may know from Red Monkey Latin Fusion Kitchen. Rumba’s goal is to bring Miami-style Cuban food, drinks, breakfast and nightlife with a fun and exciting experience. No word on an open date.

The folks over at ITB Insider reported that The Flying Mayan plans to open in December at 319 Fayetteville St. in the former Wahlburger’s space. Billing itself as a place where “the Southwest meets the Southeast,” The Flying Mayan specializes in “fresh, made from scratch sauces, salsas, and menu items that have their roots in both regions.” It is being developed by the same team behind the Flying Burrito, located on Grove Barton Road.

Over in Cary, got word from reader Bill Striegel that Amberly Local at 718 Slash Pine Dr. opened last Friday. They feature 24 craft beer taps, wine by the glass and a deli kitchen turning out what looks to be some pretty delicious sandwiches, salads and things like cheese and meat boards. Kid friendly!

Down in Holly Springs got word from Chris Creighton that a third location of Manhattan Pizza is coming to the shopping center at 4200 Lassiter Road (same shopping center as The Butcher’s Market). They also have two locations in Raleigh. No word on an open date.

And finally, a huge kudos to the boys over at Manhattan Cafe in downtown Raleigh. Next week they are celebrating their 5th year of owning Manhattan Cafe....and you are getting the “presents.” Throughout the week they will be celebrating by picking their best seller and offering it for $5. Here’s a quick look so pick your day(s) and take advantage of this opportunity: Mon- Cajun Chicken Panini; Tue- All Deli Sandwiches; Wed- Salad Bar; Thur- Buffalo Chicken Wrap; and Friday- Philly Friday.......(If weather permits the race car they sponsor will be out front). They are located at 320 S Wilmington St. If you’ve never been before, don’t deprive yourself anymore and get by next week to try their goodies for just $5.

The News & Observer shared this week that a new rooftop restaurant is in the works for downtown Durham, coming from the owners of Gonza Tacos y Tequila. Macondo Latin Cuisine, the second concept from Gonza owners Gonza Salamanca and Carlos Rodriguez, will open in the new Longfellow Real Estate high-rise in downtown Durham. This follows on the footsteps of an earlier announcement that they will also open one in Raleigh in the Sojourn Glenwood Place Apartments, just inside the Raleigh Beltline. The Raleigh Macondo will open early next year. The Durham location should open in late 2020. Keep up with their progress on their Facebook page.

Down in Chatham County, Neha Shah, director of the county’s visitors bureau, shared with me some exciting news coming to Chatham Park. Shah shared that David Sandeghi will be bringing his Town Hall Burger & Beer and his People's Coffee to the Mosaic at Chatham Park. Additionally, she shared that Jen Kremer, who owns bagel shops in Philadelphia, will be opening Everything Bagels in Mosaic Park as well. Additionally, Kremer will have a location in the Durham Food Hall.

Saw a tweet from the News & Observer’s Drew Jackson that the former County Fare food truck venue at 1920 Chapel Hill Road which has been on the market for a cool $1.75 million, is under contract. The 4,000 square-foot facility with a 1,300 square-foot patio in Durham’s Lakewood neighborhood features six food truck landing pads and a beer garden with outdoor seating. Too early to speculate, but that is a bit exciting.

And finally, last Friday we broke the news that the Yellow House Tacos, a proposed joint venture between the folks at IPIII and Al’s Burger, is no longer on the drawing board. That’s the bad news. The good news is we still get to enjoy the great pie at IPIII and burgers at Al’s. So life is not all bad!

We broke the news last Friday (after we “went to press”) that the Mellow Mushroom on Chapel Hill’s Franklin Street will close this Sunday.

For those down in Fuquay-Varina, you’ll be sad to learn the news that Chris Creighton shared with us that the One Stop Market at the Citgo gas station at 101 Dickins Road has closed. However, rumors are that a Mexican restaurant is going in its place. Stay tuned.

The fifth-annual WRAL.com Voters' Choice Awards presented by Millennium Buildings launched in a major way. Over 20,000 nominations were made for the area's best events, restaurants, businesses and more. And thanks to my amazing readers and followers, yours truly (Triangle Food Guy) was nominated for Best Blog AND Best Twitter personality ! But now that I am in the final five, the real work begins! Voting is now open through Dec. 1 and I would greatly appreciate your support! Thanking you in advance. Vote early and vote often!!! Vote here!

On Sunday, Nov. 3, more than 30 of the Triangle’s finest restaurants will be paired with world-class wines at the third annual Sip + Savor – A Wine, Food and Music Experience. Sip + Savor will showcase 30+ culinary all-stars, sommeliers, on-stage experience with live music, VIP lounge, and more.

The folks over at Mandolin Restaurant will hold their Fall Oyster Roast on their farm on Durant Road on Sunday, Nov. 3 from 3:30 to 6:30 pm. At their traditional North Carolina Oyster Roast, they will be cooking wild NC oysters over an open fire and serving them with the traditional accompaniments and seasonal dishes from our farm. $65 per person includes all food, non-alcoholic beverages, and gratuity. Wine and beer will be available for a supplemental fee.

The Cystic Fibrosis Foundation will hold their Brewer’s Ball on Nov. 8, 2019 from 6:30 to 10 p.m. at The Rickhouse in Durham. The Ball is an evening celebrating the Triangle's “finest” young professionals and features food, beer, live music, live and silent auctions, and a chance to mingle, all while being a part of a great cause: helping move us closer to a cure for cystic fibrosis. This one-of-a-kind beer tasting event has grown each year with the 2018 event hosting over a dozen different vendors including local craft breweries, and food from several Triangle area restaurants. The event will be capped at 300 people and tickets have sold out every year!

If you are looking for the recipe for a perfect fall day, here's a tip: Salt & Smoke VII presented by chef Kevin Callaghan and his team at ACME on Saturday, Nov. 9 from 1:30 to 6:30 pm. Join the nearly 300 people who've already bought their tickets to the seventh annual celebration of southern food and drink and music at the beautiful Rock Quarry Farm in Orange County. Visit their Facebook events page here and get tickets here. Isn't it time you #GetYourSouthOn? Thanks to the folks over at Taste Carolina for the reminder.

On Sunday, Nov. 10, the folks over at MOFU Shoppe in downtown Raleigh are hosting a pop-up meal, Get Lao'd for Veterans Suicide Awareness, benefiting Stop Soldier Suicide with an incredible Laos inspired menu from one of MOFU's own, Dallas Frentz. Dallas is a Purple Heart recipient. Get all the details and reserve your spot here on their Facebook event page.

Nov. 14 is the date for the next Uninhibited Bourbon & Wine Dinner over at Uninhibited Tapas at 3048 Medlin Drive in Raleigh. Chef Gregory Goldberg's first one was a huge success and they are looking to build on that with this one. Tickets are $45+ with the bar opening at 6, and the dinner beginning at 7:30.