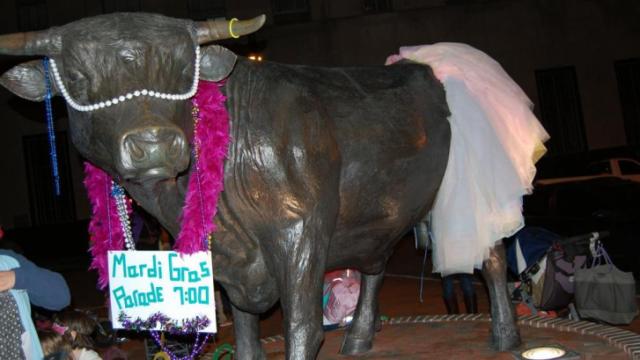 Durham is the place to be this weekend with the year’s first food truck rodeo, a Mardi Gras kickoff party and more!

It is time for the first Durham Food Truck Rodeo of 2014. More than 40 trucks, including Chirba Chirba, Pie Pushers, Porchetta and Sarge's, will be on hand at Durham Central Park from noon to 4 p.m. There will also be some local beer from Fullsteam and live music. Weather permitting, the lawn will be full of man-made snow for sledding. Bring a lawn chair and blanket and enjoy the afternoon.

Durham is getting into the carnival spirit Saturday night with a Mardi Gras kickoff party at The Pinhook. There will be music from The Bulltown Strutters and fire dancers. The event is also an official launch party for the Durham Mardi Gras parade Indiegogo campaign. Each year this walking parade heads through downtown Durham on Fat Tuesday evening. The crowd-funding project money will be used for decorations, beads, city permits and music. The parade and block party are free to join.

Band Together NC hosts its first fundraiser of the year at City Limits in Raleigh Saturday night. Brooklyn-based bluegrass/alternative-country band Yarn and Raleigh’s own Old Habits will take the stage. Proceeds benefit Band Together’s nonprofit partner this year – Communities in Schools of Durham and Communities in Schools of Wake County. Tickets are $12 in advance and $15 day of the show. VIP tickets are $75 each and get you dinner, early admission and three drink tickets.

Head to the North Carolina Museum of History on Saturday to join in the statewide kickoff to Black History Month. This year’s theme is “From Jubilee to Justice” and will honor the 50th anniversary of the Civil Rights Act of 1964. There will be music, storytellers, writers, dancers and cooking demos.

The musical “Once” plays the Durham Performing Arts Center this weekend. This show is based on the 2007 Academy Award-winning film of the same name. The story follows an Irish musician and a Czech immigrant drawn together by music. Tickets start at $35.

The North Carolina Opera presents Puccini’s “La Boheme” at the Memorial Hall at the Duke Energy Center Friday and Sunday. This show was the inspiration for the Broadway’s “Rent.” Tickets start at $27.

The North Carolina Museum of Art is letting you get a peek under the hoods of some classic Porsches. This weekend when you visit the Porsche by Design exhibit, some cars will have their hoods up for viewing. These “Hoods Up” days offer a great glimpse into these cars. “Hoods Up” runs through Monday and the exhibit itself is there through Feb. 2.

Reminder: This is the last full weekend of ice skating in downtown Raleigh. Ipreo’s Winterfest rink will close on Saturday, Feb. 1.