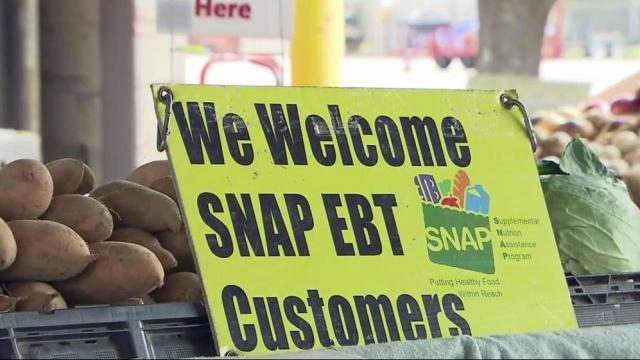 Raleigh, N.C. — North Carolina residents who receive food stamp benefits will get them early because of the federal government shutdown that has resulted over a dispute over a wall at the U.S. and Mexico border.

According to a statement released Monday by the North Carolina Department of Health and Human Services, February's Food and Nutrition Services benefits will be issued by Jan. 20. The benefits, which are part of the Supplemental Nutrition Assistance Program, or SNAP, would usually be disbursed between Feb. 3 and Feb. 21.

"We are working closely with county departments of social services and our federal partners to ensure participants and retailers have little to no interruption of FNS services due to the shutdown," Tara Myers, NCDHHS Deputy Secretary for Human Services, said in a written statement.

The U.S. Department of Agriculture is among the agencies affected by the the shutdown, which began more than two weeks ago. The USDA supervises the SNAP program along with the Women, Infants and Children program (WIC) at the federal level.

The food and nutrition services provide low-income families with funds to buy food.

Once February’s FNS funds are distributed, they will be available for use, according to the statement by the state health and human services agency. The agency warned that recipients should "be aware that since there will be no FNS benefits issued in the month of February, they should plan accordingly."

Despite the federal shutdown, DHHS projects to have sufficient funds through February, not only for FNS, but also for Temporary Assistance for Needy Families (TANF) and the Women, Infants and Children program (WIC). However, if the federal shutdown continues, funding for these services could run out after February.

According to reports, the early payout of billions of dollars in food benefits is unprecedented and has prompted states and grocery stores to respond quickly in order to accommodate the early benefit payout.

The Trump Administration came up with the early payout system because of fears that the program would run out of funds given that the federal government has shut down because of a dispute between Trump and Congress over who will pay for a $5 billion wall that would be built at the border.

According to a story in Poltico.com, Grocery retailers across the country are preparing for a potential onslaught of SNAP shoppers this week.

The retailers are working to ensure that they have enough food stocked and employees on hand to handle the volume, the site reported.

SNAP purchases account for nearly 10 percent of all grocery business in the U.S. each year, according to recent estimates.