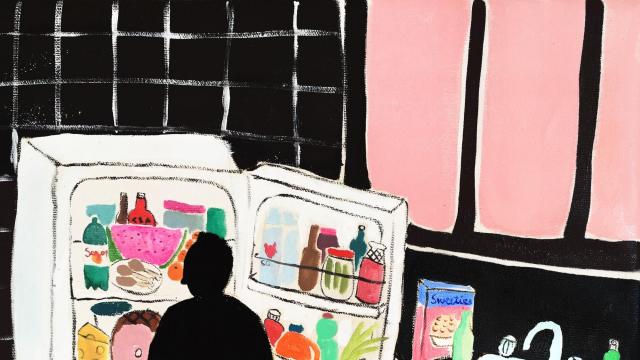 Seven years ago I lost 60 pounds, but recently I’ve struggled with gaining it back.

I’m not alone in my weight struggles. Nor am I alone in the eating disorder I have wrestled with for the last 40 years.

It’s the most common eating disorder, according to a meta analysis in the Annals of Internal Medicine, and yet it’s rarely discussed in a doctor’s office, let alone publicly.

That review found that binge eating disorder, or BED, affects 3 percent of adults in the United States in their lifetime; it is defined as one or more episodes of psychologically distressing eating per week over a period of at least three months. This isn’t a Thanksgiving dinner where you and your family couldn’t resist trying all three pies. The eating with BED feels out of control — probably because it is.

For me, it’s as if I’m sliding down a mountain swinging a pickax that fails to stop my descent. Except I feel ashamed, secretive and worried that I’ll be judged for falling.

It feels like a curse, and I suppose in many ways it is.

My curse was cast in 1978 when I was 12. It was “1950s day” at my junior high school. My mother said she had just the thing. She rummaged around in her closet and pulled out a silk chiffon and tulle dress so breathtaking that she hadn’t been able to part with it.

The dress was rose red and nipped smartly at the waist. It was the kind of dress that a young princess might wear to a cocktail party — the stuff of a 12-year-old girl’s dreams. In an instant I saw myself transformed from the girl everyone laughed at for her clothes into Cinderella. I would drift through the front doors, and the girls would stare and the boys would wonder.

People would see me as I saw myself.

The fantasy evaporated in the time it took to get the dress from the floor to my hips. I blushed as I wiggled it around my waist because no number of contortions would get the zipper more than halfway up my back.

My faced burned. I desperately fumbled with the zipper some more.

Then she added: “I wore that even after I had your brother. I was so thin.” (In those days not everyone knew just how harmful words about weight and size could be.)

I slid the folds of fabric off my shoulders but could not shed the shame. She handed me a plain blue gingham dress. It was not the stuff of dreams.

I walked into that room a very tall and average-size girl. I walked out a fat girl.

I became uncomfortable with my body, and that shame spilled over to food. I started to restrict what I ate in front of others while eating uncontrollably in private.

I joined Weight Watchers for the first time at age 16. I weighed 154 pounds, which was in the medically “normal” range for my height. No one took me aside and asked why I was there. They just took my baby-sitting money and put me on the scale.

And so began a lifetime of dieting. A never-ending quest to fix the unfixable — what I saw in the mirror. Initially I cycled between a medically normal weight and being underweight, but each time I gained the weight back it would come with a few added pounds.

Hunger became an emotion. Stress, boredom and even happiness could spur overeating. The feeling of my mouth stuffed with food and the over-distention of my stomach offered some kind of haptic feedback I still struggle to explain. I was often in physical pain from the amount of food, and yet it was comforting. I felt regret while I was overeating but simply could not stop, so that failure just fueled the fire. I had heard about bulimia, but I never had the urge to induce vomiting. I figured I was simply a glutton.

In medical school I saw — and perhaps projected — pity on everyone’s face when we discussed anorexia, and disgust when the subject was bulimia. In my mind, overeating was a stigma, so I never pulled any of my professors aside to ask if they had heard of people who sometimes ate uncontrollably, lied about it and then felt ashamed.

Imagine feeling so bad about your relationship with food that you can’t even do your eating disorder right?

My lying was not restricted to what I ate. I would lie about going out because I’d gained weight and had nothing to wear.

Ten years ago I had a party to attend. San Francisco is filled with beautiful clothing boutiques, but not one had a dress that could possibly fit me. And then I saw it in a window — a beautiful purple wrap dress. Assuming it would be too small, I was about to move on, and then I realized I was at a maternity store.

So I used my years of obstetric training to lie about being pregnant.

I knew I had to do something about my curse, and not just for me. I didn’t want my children to have the same disordered relationship with food.

I discovered the National Weight Control Registry, a study of people who have lost at least 30 pounds and kept it off for over a year. About eight years ago I committed to the techniques I had learned were most successful for weight loss and maintenance: eating 1,400 calories a day, tracking every morsel of food and weighing yourself regularly. The tracking and weighing seemed very important for someone like me, who was prone to lying to myself about food and my size.

I lost 60 pounds in eight months. The day I became eligible to be a participant in the NWCR, I applied. The first questionnaire I was sent had questions about overeating and food consumption that were so familiar that they were eerie. My binges were described with such precision, it was as though the researchers were inside my head.

I realized then that if they had developed such accurate questions that it couldn’t be just me.

I know I’m not the only one who wakes up in the morning thinking she will get the day “right,” and then something happens and all of a sudden it’s almost midnight and I am desperately taking apart the kitchen looking for a carbohydrate on which to melt some cheese.

When I finally found a name for my cycle of overeating and shame, I felt some relief.

Before knowing I had a valid diagnosis, I felt like an unknown force was driving my car. I didn’t know how to take the steering wheel because I had no idea what I was fighting.

Now I know the name of my curse and over time I have been able to move that demon to the passenger seat, and most days to the back seat. There are even times I’ve stuffed it in the trunk. But I’m a realist, so I don’t focus on kicking my demon to the curb.

It helped to know I have a binge eating disorder, not a personal failing.

I don’t have an easy answer, but I can raise my hand and acknowledge the truth not just to myself, but also to the many people who have sat by themselves late at night in the kitchen wishing desperately that they could just go to bed.