WRAL Winter Wonderland to usher in holiday season with food, fun and more

Raleigh, N.C. — The downtown Christmas parade is an annual tradition in Raleigh. This year, WRAL is starting a new tradition with the first ever Winter Wonderland.

After the parade on Saturday, families can ease into the holiday spirit at the event, which will feature food, fun, WRAL News anchors and the host of American Ninja Warrior, Matt Iseman.

Other special guests expected to make an appearance are Santa Claus and Mrs. Claus, who will both be available for pictures and Wool E. Bull, the mascot of the Durham Bulls.

The event will take place on Saturday at Saint Mary's School, 900 Hillsborough St., and it will begin right after the Raleigh Christmas parade ends.

The first 250 people to arrive will receive a free WRAL-TV Christmas ornament.

"We've got this year planned, and we hope that it will turn into something that will be very popular and beloved by people just like the Christmas parade is, " said Joel Davis, vice president and general manager of WRAL-TV. "There is a lot of excitement that this year we are adding a whole new component with the WRAL Winter Wonderland." 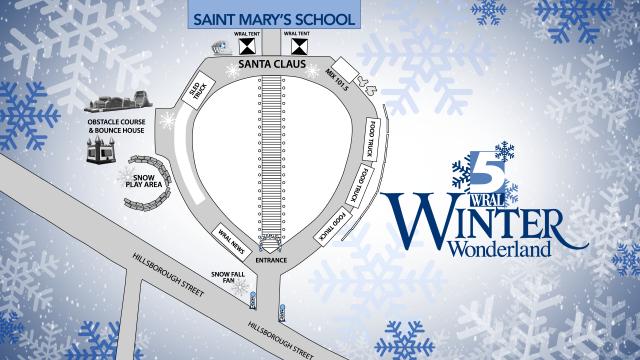 In addition to being in the parade, Iseman will also be on hand for a meet-and-greet for fans.

"He'll be there at the very beginning before the parade begins to do some live interviews with us on television," Davis said. "He'll actually get on the float and go down the parade route and wave to people along the parade route. Then when he reaches the end, we'll transport him back to Saint Mary's School where he'll be there to sign autographs and interact with the fans."

Since a winter wonderland would not be complete without the snow, there will be plenty of that on hand as well.

A "snow" fall will be located near the entrance to the event and near Santa's station. Snow will also be used for sledding and in a play area.

Participants will also have the opportunity to purchase food from food trucks that will be parked at Saint Mary's School, and their menus will include gourmet baked potatoes, chopped chicken barbeque and desserts.

The decision to host the Winter Wonderland stemmed from WRAL's long involvement with the Raleigh Christmas parade, Davis said.

After televising and being apart of the Raleigh Christmas parade for 45 years, WRAL noticed that families did not have many options for fun events to participate in before leaving downtown.

After the Raleigh Christmas Parade: 8 things to do with kids in downtown Raleigh

"I think the owners of the company, which is a family company that goes back generations, take great pride in the fact that this is an event that they have had the pleasure to be associated with for this many years," Davis said. "It's kind of in the DNA of the company now."

Davis said the station hasn't decided whether to make the Winter Wonderland an annual event, but he hopes that it will turn into an annual tradition.