Florida Recount, Amid Machine Error and Lawsuits, Is ‘Going to End Up a Little Messy’ 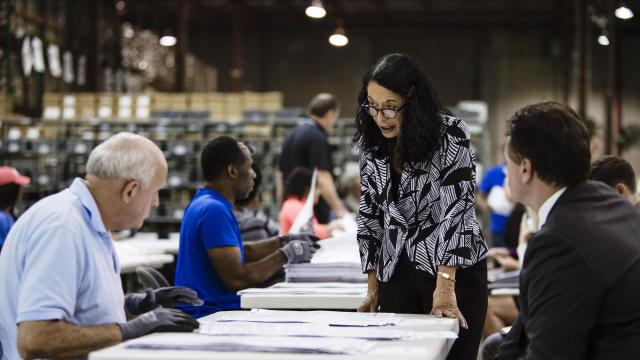 RIVIERA BEACH, Fla. — Jim Bonfiglio, the mayor of a tiny coastal town south of Mar-a-Lago, lost his shot at a seat in the Florida Legislature in the midterm election last week by an agonizing 37 votes.

Even with the mandatory recounts required by Florida law, it appeared he was headed for certain defeat: Palm Beach County does not own the modern, high-speed tabulation machines required to conduct recounts in multiple races simultaneously. And with the contests for governor, senator and agriculture commissioner all too close to call, there would be no time to count the votes in the state legislative election, too, before Thursday’s recount deadline.

Bonfiglio, a lawyer, did what a lot of people in Florida have done in the litigious days since the Nov. 6 election: He filed a lawsuit. And briefly, it appeared, he won. In a ruling that immediately raised questions about the entire Florida recount, a judge in Leon County ruled on Tuesday that Palm Beach County should have more time to count its votes.

The ruling threatened to throw the entire election into new turmoil: If Palm Beach County didn’t have to report the results of a machine recount Thursday, the deadline for the rest of the state, how could winners be declared?

The state’s top elections official rushed to move the case to federal court in Tallahassee, as did lawyers for Sen. Bill Nelson, the Democratic incumbent, hoping to persuade a federal judge to extend the deadline for all 67 counties. That’s where the case stood on Wednesday, with Palm Beach County proceeding as if it would not get an extension.

The legal maneuvers and follow-up motions underscored the volatile nature of the 2018 midterm elections in Florida, where a governor who has not been declared the victor has begun his transition, and the senator who has not quite won the race attended freshman orientation in Congress. Nelson lost to Gov. Rick Scott, a Republican, by just 12,600 votes.

“This has been a really, really weird election year,” said Paul Lux, president of the Florida Association of Supervisors of Elections. “If 66 of 67 counties are able to complete the deadline, should they all be held up?”

He said the judge’s ruling surprised him because the law already provides for the possibility that counties may not meet recount deadlines. If a county does not finish in time, the law states, the provisional results that were submitted to the state on Saturday stand.

Palm Beach County has from the beginning threatened to be a spoiler in the fraught attempt to come up with winners in the three still-contested statewide races, not to mention Bonfiglio’s state House race. The county’s outdated tabulation machines can only handle one recount at a time.

The county had indicated from early on that it would have difficulty meeting Thursday’s recount deadline. Things got even worse Tuesday night when Bucher announced that mechanics had been flown in to work on aging ballot-counting machines that were giving incorrect totals, overheated from the recounts. The problem meant that all 175,000 early votes had to be retabulated, she said.

“I am working as hard as I can, and I can’t give any more,” she said Wednesday, noting she had not been home for three days. “I don’t think that you’re going to find somebody else that has the dedication.”

Bucher said she had the money in her budget to upgrade her 11-year-old equipment, but the new machines on the market did not comply with Florida laws that require equipment to have by 2020 certain features for people with disabilities. That does not seem to have prevented other counties from making recent improvements, but Bucher said the counties that shelled out money for new machines will soon be out of compliance with state law.

“I don’t think it’s very responsible to spend $11.1 million on equipment that’s not going to be viable in 2020,” said Bucher, an elected Democrat. Palm Beach is not the only county that has experienced problems during the recount ordered Saturday. Broward County’s count was delayed for several days because its machines did not initially pass a required accuracy test. A Bay County official admitted accepting votes cast by email and fax, which appears to be illegal. (Nelson’s campaign sued on Wednesday to examine those ballots.) Manatee County election workers had to start over after about five hours of counting because the elections supervisor forgot to press a button that would identify blank ballots.

“I think you cannot live in Florida and not be somewhat embarrassed about it, especially when it happens year after year after year,” said Michael Bennett, the supervisor who had failed to push the button. “We have a unique situation where the races are so unbelievably tight. You can’t have the close races that we have without some controversy. Stuff happens; a guy forgets to push a button.”

Miami-Dade, the state’s largest county, where some 100,000 more ballots were cast than in Broward, completed its recount and spent most of Wednesday conducting additional accuracy tests to check its work.

As far as what happens next with the Palm Beach County court’s order on Tuesday, the federal court has scheduled a status conference in the case for Thursday morning. Marc Elias, Nelson’s lead recount lawyer, said that once the Florida secretary of state moved the case to federal court, the state court immediately lost jurisdiction, meaning the court’s ruling will not stand.

The lawsuit Democrats filed late Tuesday is intended to make sure that every legal vote is recounted the same number of times, which might not happen if some counties do not finish in time for the deadline, Elias said.

“The state of Florida is not free to count some ballots multiple times in a recount and other ballots not at all,” he said.

Democrats are arguing in federal court that the recount deadline should be extended in all counties — a move Scott’s campaign dismissed as “frivolous.”

“While Bill Nelson and his D.C. lawyer continue to file frivolous lawsuits attacking Florida’s laws, Senator-elect Rick Scott will remain focused on actually respecting the will of the voters,” Chris Hartline, a campaign spokesman, said in a statement.

Republicans in Palm Beach County, on the other hand, have said they favor an extension if necessary.

“They should be counted. That’s democracy,” said Michael Barnett, the head of the Republican Party in Palm Beach County. “It’s going to end up a little messy.” Bonfiglio, who is a Democrat and mayor of the town of Ocean Ridge, said the outcome of the state House race is not as important as the process. “That’s not the point, who wins or who loses,” he said. “The point is every voter has got the constitutionally guaranteed right to vote and the constitutional right to have their vote counted.”

Mike Caruso, the Republican who beat him by the thinnest of margins, agreed.