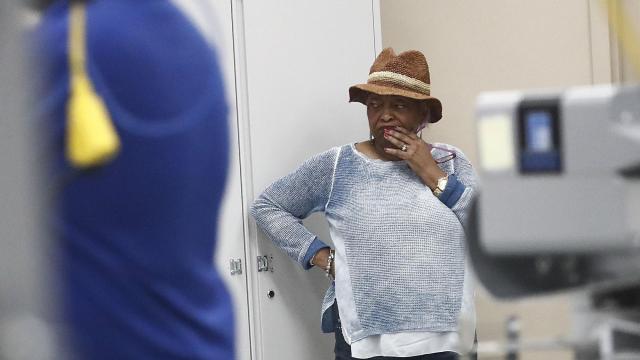 (CNN) — Republicans in Florida and nationally who are trying to paint the statewide recount as a Democratic effort to steal the election have zeroed in on one woman as the face of the effort: Broward County Supervisor of Elections Brenda Snipes.

As votes are recounted in Florida's Senate, governor and agriculture commissioner races, Snipes, a Democrat, has been the target of repeated and direct attacks from Republicans up and down Florida. Former Gov. Jeb Bush, the man who first appointed her to the post, called for her to step down on Monday. Gov. Rick Scott, whose Senate race is central to the recount, sued her and has used her as a foil for days. And dozens of supporters of President Donald Trump outside of Snipes' office in Broward County, some holding signs labeling her the "Supervisor of Corruption," have personally vilified her.

"Lock her up," the protestors yelled, repeating a chant that had been used against Hillary Clinton during the 2016 presidential campaign.

Snipes has kept a low profile through much of it, but even Democrats in Florida admit the criticism is not entirely without reason: Broward County's elections office has been hampered by controversies for years and Snipes has been plagued by questions of bias for much of her tenure. And with Republicans leading in the state's two top races -- Senate and gubernatorial -- members of the party from the President on down are clearly eager to besmirch Snipes, and the entire recount, in the process.

On Monday, while speaking briefly with reporters for the first time in days, Snipes touted her record and argued that when she makes a mistake, she owns up to it.

"There have been issues that didn't go the way we wanted," she said of the days leading up to the recount. "We can call it a mistake, we can call it whatever you want to call it."

Scott thrust Snipes into the center of the debacle when he sued her and her counterpart in Palm Beach County, Susan Bucher, last week. Scott -- in conjunction with the National Republican Senatorial Committee -- won that suit, requiring Snipes and Bucher to hand over voter-related information and giving Republicans a powerful talking point to accuse the duo of violating the state's constitution.

Snipes argued on Monday that the lawsuits were nothing more than an attack on her integrity.

"The lawsuits as they are written certainly cast dispersions on my character and usually we build character over a period of time and character is always on display. And I have worked here for about 15 years and I have to say this is the first time that this office or I have been under such attacks," she said. "If we make mistakes, we own mistakes. If there is something that the public needs to know, then we provide that information."

With Republicans using a strategy that largely mimics Trump's attacks on institutions, the President has also jumped into the fray, attacking Broward County in particular.

"And all of the sudden they're finding votes out of nowhere," Trump added, without evidence, before he left for France last week. "There's bad things that have gone on in Broward County, really bad things."

Snipes fired back at Trump on Monday.

"We are in an era when people oftentimes speak without having vetted the information," she said. "I'm not sure where the President gets his information from. I have not spoken with him. And I don't want to make any other comments on that."

Juan Peñalosa, the executive director of the Democratic Party of Florida, said of the Republican strategy to hone in on Snipes: "She (Snipes) is trying to swim and it is like Republicans are tying an anchor around her ankle."

The primary reasons Snipes has become a target is because her office been marred by legal questions and slow vote-counting for years, a fact that even state Democrats admit.

"Brenda makes herself an easy target because she has a spotty track record and Broward is such beast to administer," said a top Democratic official in Florida, citing the fact that Broward is home to nearly 2 million people.

But even when trying to defend her, Democrats are unable to get over the fact that she isn't the best messenger for them.

"The attacks are unfair. She is following the law and she is diligently working to get the ballots reprocessed," said the Democrat, who would not criticize Snipes on the record and requested anonymity to speak candidly about the Democratic elected official. "Does that mean that she is a perfect SOE? Absolutely not. She is far from a perfect SOE. And I think most Democrats would rather have their elections in Broward County, one of our most important counties, be administered with someone with a better track record of success."

Snipes, a teacher before she became an election official, was born in Talladega, Alabama, but has lived in Broward County for over five decades ago, according to her biography. Snipes worked as principal of C. Robert Markham Elementary School during her career and retired as the area director of a group of 16 local schools.

Snipes was appointed to the position by Bush, a Republican, in 2003 after the then-governor removed her predecessor, Miriam Oliphant, for a series of missteps. Snipes has since won re-election four times, most recently in 2016.

The most recent questions about Snipes have been the most potent for Republicans: A Florida judge ruled that Snipes violated state and federal laws in when she destroyed ballots too soon after the 2016 election, despite one of the Democratic candidates in a primary race taking her to court to preserve the ballots and a federal requirement that mandates ballots be kept for 22 months after an election.

At the time, Snipes blamed her staff for the "mistake."

"When I sign, I sign folders filled with information," Snipes said in her testimony. She later said, "I trust my staff. They have the responsibility of giving me information that's correct."

She was also party to a lawsuit in 2016 regarding a medical marijuana amendment that was missing from some absentee ballots and another decided in 2018 regarding when and how her staff could open absentee ballots.

The lawsuits have been the backbone of attacks against Snipes, whom Republicans have cast as a scandal-plagued liberal who is trying to tip the election in the favor of Democrats.

To date, there has been no evidence of fraud -- a charge routinely made by Republicans on behalf of the Scott campaign -- but Snipes' history has opened the door for Republicans to villainize her in the fierce public relations battle.

Calls for her to step down

It seems like every Republican in Florida has an opinion about whether Snipes should keep her job.

"There is no question that Broward County Supervisor of Elections Brenda Snipes failed to comply with Florida law on multiple counts, undermining Floridians' confidence in our electoral process," Bush wrote on Twitter Monday. "Supervisor Snipes should be removed from her office following the recounts."

Rep. Brian Mast, acting as a surrogate for the Scott campaign, said Snipes had "failed" and called for she and Bucher to be ousted.

"We have two counties out of all Florida counties that have failed. And not just failed once -- this is something where they have been a historical track record with these supervisors of elections," he said.

And Republican Sen. Marco Rubio has laid the entirety of the blame for the recount on Snipes.

The person who hasn't called for her ouster is Scott, the Republican governor who has the power to remove her, despite the fact she is involved in his race for the US Senate. Republicans in the state are clear-eyed about the fact that it would look unseemly for Scott to fire Snipes in the midst of a recount he is directly involved in.

It took mere minutes from protesters outside the election office in Broward County to hone in on Snipes.

By the time reporters began arriving outside the office on Friday, a group of protesters were already chanting "lock her up" at Snipes.

"Brenda Snipes has got to go," they chanted, holding signs that slammed her character and professionalism.

Snipes laid low for the weekend, using her lawyers to answer question at a news conference on Saturday. That strategy contributed to the view that she was avoiding the public scrutiny as votes were counted throughout Florida.

"All resources around the clock are being placed both by Dr. Snipes office as well as the independent canvassing board to make this happen by the deadline on Thursday and we have every intention of meeting that," Eugene Pettis, Snipes' attorney, told reporters.

But that did not quell the protests, with a number of Republicans sporting Trump and DeSantis gear camping out outside her office to make sure their voices were heard.