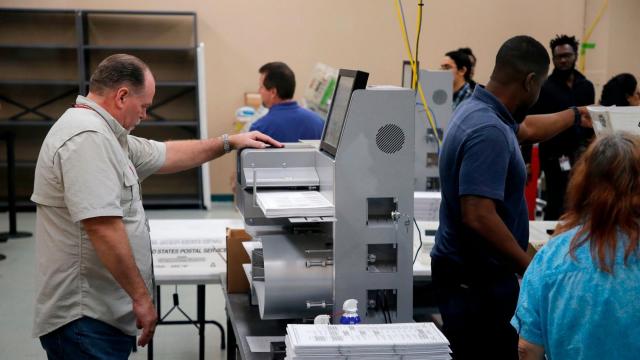 (CNN) — Florida Democratic Party officials gave volunteers incorrect information to share with voters about the state's deadline for curing endangered vote-by-mail ballots that did not meet the state's signature match requirements, according to an email obtained by CNN.

The "curing" process requires voters to send sworn affidavits satisfying any issues with their ballots to the county boards by 5 p.m. on the day before the election. The deadline this year came on Monday, November 5.

But in a November 7 email obtained by CNN, Jennifer Kim, a field operative for the Florida Democratic Party, instructs phone bankers to tell voters who did not sign their ballots properly that the cut-off is not until November 8, which is three full days after the actual deadline.

"If needed FDP staff or volunteers should go pick up their affidavit and deliver it for them if they are not able to deliver by 5pm Thursday," Kim wrote.

Led by President Donald Trump, Republicans have frequently alleged — without any evidence — that Democrats are trying to "steal" the election from Florida's GOP candidates. Reports this week of the Florida Democratic Party's efforts have fueled those charges, even if they do not substantiate the broader claims made by leading Republican officials, who have mostly focused on the counting of votes. There is still no basis for those accusations.

The discovery of the emails comes on the heels of the Florida Secretary of State's announcement that it is asking the state's three U.S. Attorneys to investigate irregularities it discovered in four counties "as it relates to the vote-by-mail voting process."

The alleged irregularities in question had to do with the date on "cure affidavits," documents which are needed to fix a mail ballot applications. The instructions to return these ballots had, in the instances discovered, been altered to read Thursday, Nov. 8.

The state's request for a federal investigation appears to be the first time Florida elections officials have flagged specific potential criminal activity in last week's election. While altering these instructions would indeed be a violation of the law, the motivation behind doing so remains unclear.

It is not clear whether Kim, in the email, was intentionally spreading incorrect information or had been misinformed. CNN's multiple calls, emails and texts to party officials, including a spokeswoman and its executive director, asking for an explanation have gone unanswered.

"Upon receiving notice of the allegations that the form was incorrect, FDP took immediate steps, including hiring an independent investigator to review the issues at hand," Herron said. "As soon as we know the results of the investigation we will advise you."

Okaloosa County Supervisor of Elections Paul Lux was among the first to note that the date in a cure affidavit sent to his office had been altered.

"Please pass the word to the (Florida Democratic Party) that they can't arbitrarily add their own deadline to your form or (vote by mail) cures!!" Lux wrote to Florida Department of State officials in an email on November 9. "This is crazy!"

Lux provided CNN with a redacted version of the incorrect affidavit along with a copy of what the form is supposed to look like.

Lists of voters whose early ballots are not counted and in need of "curing" — or correcting — are made available to the public by Florida's 67 county election offices.

In her email to colleagues, Kim wrote, "These are people that submitted (votes by mail) before Election Day and did not sign them properly."

Before spelling out a list of steps, she added: "THESE INSTRUCTIONS MUST BE FOLLOWED TO THE LETTER."

The first two asked for volunteers to "have the affidavit form open on their computer" and then for them to "fill out the affidavit with all information except for the (voter's) signature."

The seventh and final step included the erroneous information.

Republicans have charged that Democrats purposely broke the law hoping to get more ballots into the counting pool in anticipation of a potential court ruling that might validate ballots that arrived past the deadline. They also called on Sen. Bill Nelson to demand the resignation of Florida Democratic Party Chair Terrie Rizzo.

"Bill Nelson can either stay silent and be in favor of organized fraud by the Democrat Party, or he can do the right thing and demand the immediate resignation of Florida's Democrat Party Chair," said Jackie Schutz Zeckman, Scott for Florida campaign manager.

CNN is continuing to seek further comment from the Florida Democratic Party.

CORRECTION: This story and headline have been updated to correct the type of ballots about which incorrect information was shared by the Florida Democratic Party.