Florida Braces for Vote Recounts in Senate and Governor’s Races 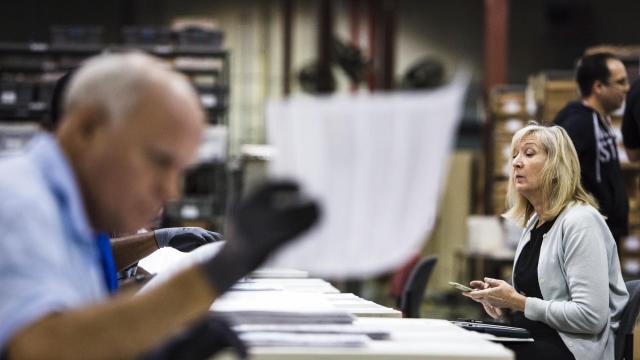 Gov. Rick Scott, whose margin in the race for the Senate narrowed to less than 13,000 votes, denounced the embattled Broward County elections supervisor, Brenda Snipes, who, the campaign said Friday night, still refused to confirm whether she had counted all the ballots. Snipes was forced to admit that she had inadvertently tabulated about a dozen rejected ballots, which only fueled Republican accusations that her office had botched the vote-counting process.

“Three days after Election Day, the vote tally continues to change and Supervisor Snipes still refuses to explain where and how the new votes came to light,” the campaign said in a statement. “The public deserves a clear and direct answer.”

Scott urged sheriff’s deputies to be on alert for any reports of vote-rigging.

Secretary of State Ken Detzner, an appointee of Scott, was expected to formally order the recounts Saturday afternoon. The new tallies were expected to begin as early as Saturday afternoon in the state’s largest counties, Miami-Dade, Broward and Palm Beach. Other counties could also proceed immediately, though many were expected to wait until Sunday to begin. Florida wasn’t the only state still trying to determine the outcome of Tuesday’s elections. In the Georgia governor’s race, Brian Kemp, the Republican, was ahead of his Democratic opponent, Stacey Abrams, by about 63,000 votes.

In Arizona, Kyrsten Sinema, the Democratic candidate in the state’s uncalled Senate race, expanded her lead Friday to 20,203 votes over Martha McSally, the Republican contender.

Each county in Florida will have until Thursday to run all of its ballots through counting machines again. At that point, any race that remains within a margin of 0.25 of a percentage point or less will have another three days, until Nov. 18, to conduct a manual recount.

Manual recounts seem almost certain in the races for Senate and commissioner of agriculture, which are already within that quarter-point margin.

A manual recount does not mean every ballot is counted by hand.

Only the votes that come up as an “undervote” or “overvote” get pulled for manual review. For example, if a voter had put a check mark next to a candidate’s name instead of filling the circle out completely, the machine could have missed it.

In cases where the machine detects that a person actually chose two people in the same race, a team of election workers looks at the ballot to see if the voter’s intention was clear. The person could have crossed out one candidate’s name, so that ballot would likely be counted.

But several issues could arise during the process. Older counting machines might be unable to conduct an unprecedented three statewide recounts simultaneously, making it impossible to meet the state’s deadline. If a county is unable to complete a recount in any particular race, Saturday’s unofficial results from that county would stand for that race.

Brian Y. Silber, a lawyer, went through an exhaustive manual recount this summer when a Broward County judge he represented seemed to have lost on Election Day — only to wake up the next morning to find that he had taken the lead. It took two days to get a new result, he said, and that was with about a quarter of the number of ballots that now must be reviewed.

“I would be shocked, really shocked, if there was evidence of fraud, conspiracy, anything illegal or evil,” Silber said. “What I genuinely believe is that elections officials, for whatever reason, are not getting it done on time. That’s a combination of poor management, underfunding and understaffing.”

The problem has been going on for years, he said.

He said Republicans had a savvy — albeit misleading — strategy to convince supporters in advance that any loss would be attributable to misdeeds by Democrats.

“It’s really smart on the GOP’s part,” Silber said. “They know there is no evidence of fraud.”

Daniel A. Smith, chairman of the political science department at the University of Florida, said 41,000 Floridians requested mail-in ballots, so elections supervisors were simply inundated with ballots to count after Election Day.

“My position quite honestly is there is very low likelihood of fraud going on anywhere,” Smith said. “There is a capacity issue when so many ballots come in on Election Day.”

Scott claimed fraud in Broward County even though the state was monitoring Snipes’ office during the election. The state’s division of elections assigned two staffers to watch how the election was administered, visit polling places and observe the preparation of voting equipment and procedures.

The monitors made no reports of fraud.

“Our staff has seen no evidence of criminal activity at this time,” Sarah Revell, a spokeswoman for the division of elections, said on Saturday.

Marc Elias, Nelson’s attorney, has maintained that a machine error might still account for fewer votes for Nelson — an issue that would only be caught in a manual recount.